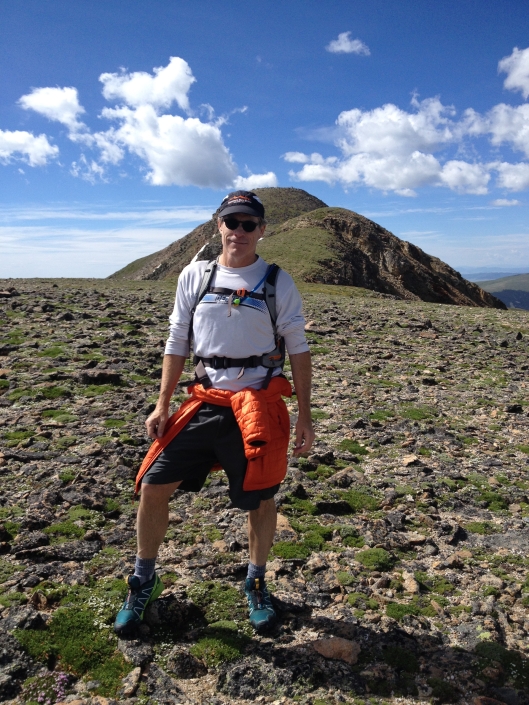 The Continental Divide Trail isn’t as well marked with signs as the Colorado Trail, and much of what I hiked this weekend with Rob wasn’t marked by trail at all.  The CDT along the mountaintops above Breckenridge, Frisco, Dillon and Keystone is essentially a route.  So few hikers travel this twenty mile section of alpine tundra that there is no trail.  The entire width of the mountaintops define the path.  Where I’m standing in this photo, the route is about as wide as the length of a football field.  Clearly, it narrows across that hill behind me.  This photo captures the pathless trail and general conditions above 13,000 feet as Rob and I hiked from Argentine Pass to Georgia Pass Saturday. 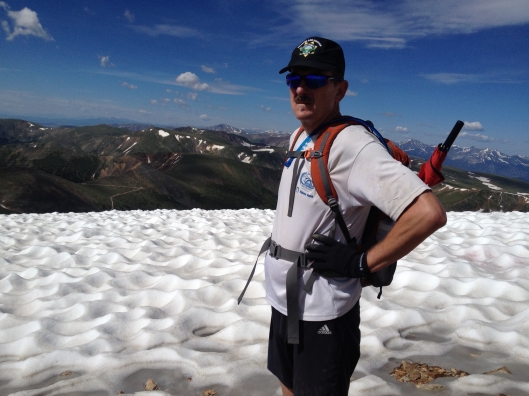 We didn’t have much snow to worry about.  This photo shows one of the larger snow fields we encountered, but we were able to hike alongside its edge.  Good thing as I wore my running trail shoes for this effort rather than hiking boots.  I wanted to test out my trail shoes, even though I knew they would fatigue my feet much more than boots.  The Salomon Speedcross trail runners are awesome.  I don’t think they have a rock plate, but their sole is strong enough to step across sharp rocks and their tread never slipped once for me.  I did notice some hot spots, but this was after 8 hours of hiking.  We completed the twenty-plus mile jaunt in 10.5 hours. 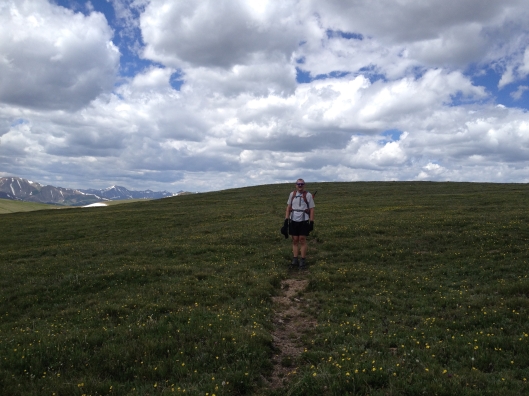 Everything was so green, even above treeline where the ground oftentimes turns to moonscape rock.  The Cushion plant moss was easily 3 inches tall in places.  The Alpine Sunflowers and Forget-me-nots were thick, and the Marmots were quite fat as well – presumably from eating the lush grasses and flowers.  This photo captures Rob in a mountaintop field of Alpine Buttercups. 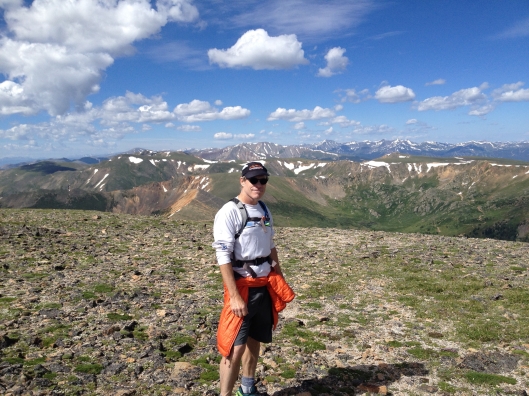 I can’t say enough just how stunning the views were on this hike.  We spent at least eight hours hiking above treeline.  I applied the 20 miles to my weekly running goal, giving me 70 for the week and a total of 260 miles toward my marathon training plan.  We hiked an additional six miles this morning which I’ll apply to this coming week’s 80 mile goal.  74 more miles to go over the next six days.