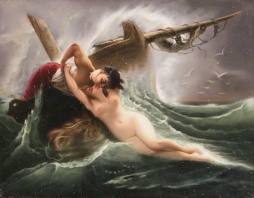 There was no question but that I would be running today.  Despite the media setting this weekend up like a blizzard with 30 mile an hour winds; this morning was a pleasant 33° with big falling snow flakes and otherwise still air.  I pulled on my running tights, a compression top and North Face shell, mittens, gaiters and hat, and was out the door onto the LoBo trail by 10:30am.  I might not have needed the tights, or gloves, or even the hat.  This was ideal running weather.  As soon as I hit Creekside Park and saw a couple strolling comfortably by, I realized I was comfortable too.  This weather might not appear inviting to others looking out the window from their cozy living rooms, but it occurred to me I felt great running outside in this snowfall.  A hard to describe feeling of freedom passed over me.  Like a young Tom Cruise jumping on the couch in his underwear.  Like making a snow angel naked.  It felt good to be outside embracing this storm, feeling the clouds release against my face.  This was going to be a nice run.

I pocketed my gloves a little after a mile, about the time a runner was approaching me ahead on the trail.  I could make out the runner was a woman, although I’d pocketed my glasses too since they had become caked with snow.  But her running clothes were evidence enough to know she was a she.  She was wearing a neon yellow, or maybe some shade of green, running shell.  And she appeared to be wearing a matching set of wine colored scarf and mittens.  The scarf, if that’s what I was seeing without my glasses, was tucked underneath her shell.  She was dressed stylish for winter running.

As we passed each other I saw she was Jen and she saw I was Ed.  I must not have been obvious underneath my winter gear either.  We both shouted out at each other but didn’t stop.  Not sure if that was rude, sorry Jen.  You didn’t stop either.  We were both past the point of no return once we identified each other considering the dangerous footing in the snow.  And while I am not saying I was running faster, I do carry a good 70 pounds or so more momentum.

A minute later I saw what appeared to be another girl runner making her way back onto the trail after perhaps taking a pee stop in the field.  Hard to say what she was doing and my imagination sometimes gets the better of me on runs.  As I drew near I saw she too had on a stylish knit hat, purple I think, with a whitish running shell.  Two smartly dressed women in a row.  As I passed she shouted out at me that her direction was harder.  I quipped back that I didn’t think so.  My logic being that I was going slightly uphill, but I think she was teasing.

In fact, I continued thinking about it for the next few minutes and came to the conclusion, or delusion, that there was something unnatural about the odds of passing two running beauties in a row like that.  And I got the distinct impression they both wanted me to turn around to run back with them.  I have to be careful here because as a guy, I oftentimes believe women want me.  But they both laid hints that I should turn around.  Stunning looks.  Fashionably dressed.  The second vixen clearly calling out to me.  And although I couldn’t quite make her out, she sounded like Abbie.  Was that Abbie?  Maybe she was actually running with Jen and fell behind for a potty break.  Although I’d suspect that more of Jen.

Regardless, these running Sirens were clearly conspiring to turn me around.  Assuming that was Abbie, then they don’t want me to train for Moab.  Their pleas were intended to send my fitness to the rocks so they can beat me next week.  A lesser man might have succumbed but I steered straight ahead.  I was planning to run 12 miles today and the weather was ideal.

I came up behind a 3rd runner, passing him a mile after that Abbie-like apparition.  Honestly I was a bit disappointed to find he was some clunky guy.  My expectations had been set for better running fare.  And shouldn’t sirens come in threes?  I know Homer settled for only two, and only a demigod would be arrogant enough to require more, but three would have been nice.

As I thought on this more, it occurred to me that I did come across three sirens on the trail today.  The first was the big, fluffy snowfall that greeted me outside.  And while I still believe the vexing allure of the second two were intended to wreck my training for Moab, this first siren lulled me into a serene mood to run all day long.  These thoughts were all in the first three miles.  Similar thoughts spanned across the horizon of my mind for the next nine miles.  Seeing my house at the end broke my trance enough to stop me from running all day long.  I can see the snow blowing sideways out the window as I sit here now by the warm fireplace blogging.  Probably a good thing I called it a day.