It’s not raining.  It’s not even cold.  It’s as if God plans on attending SWSX, so suddenly the weather improves.  I meet up with Kenneth Hausman in the Twisted X Brewery parking lot for a rematch from last Sunday.  This Texmex brewery and brew pub is located on the edge of Dripping Springs, on the way out toward Driftwood.  With Ken is his friend and neighbor, 45 year old Steve Yacktman.  Steve is prepping for a triathlon and is using this as a speed workout.  Steve also runs $30B of investments at Yacktman Asset Management.  He said, when he makes a mistake at work, it typically costs him over $100M.  Despite the large turnout and fast looking runners today, Steve smiles broadly and calmly on the starting line.  No pressure here.  This is a video of him on Squawkbox at CNBC. 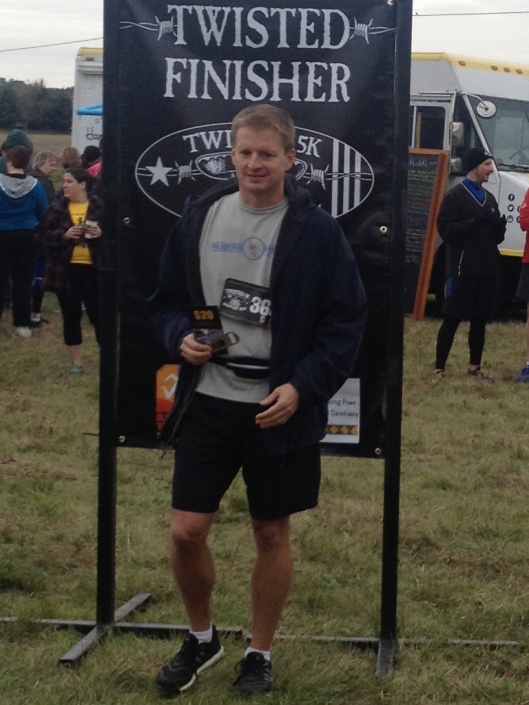 We line up just behind the runners who we expect might run a minute per mile faster than us.  We’re capable of averaging 7 minute miles.  My goal is 6:45 per mile.  I really want to PR before flying home tomorrow back to altitude.  That’s a 6:42 pace.  The first quarter mile is on a cow trail.  We expected pavement but apparently Twisted X had trouble with the permits.  I’m fine with this, I love trail running.  Grass and trails are slower though.

I start out running behind both Ken and Steve on the trail.  I pass Ken once we hit the street and start to run alongside Steve.  He pulls in front of me as we climb a monster hill.  This is just before the one mile marker, which we cross in 6:28.  I’m concerned because this is 20 seconds faster than my race plan, but it does help explain why I’m so winded. 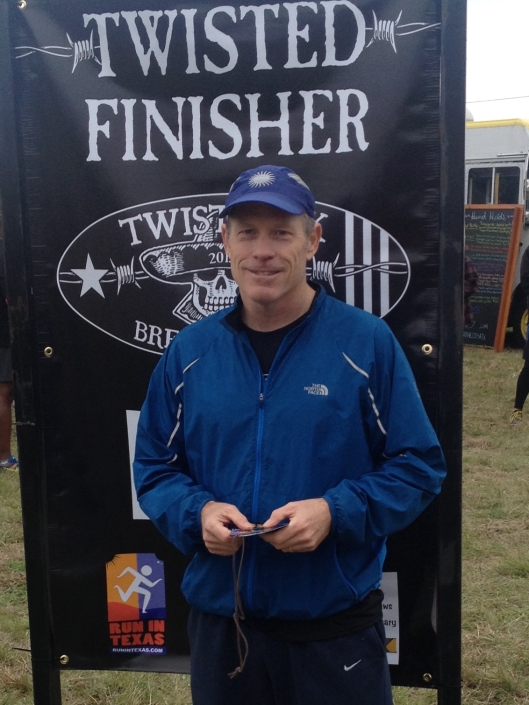 The street doesn’t last long and we soon find ourselves back in a cow pasture.  I pass Steve around the half way point as his stomach begins to cramp.  I wish I could say it was because I sped up.  As we return to the street and run back down the huge hill, Ken passes me.  This is just at the two mile point.  I run this second mile in 6:42 which I consider excellent.  I’m on pace to PR.  Of course, I’d feel even better if Ken didn’t just pass me but I still feel strong and am able to stay close behind him.  I catch my breath running down the hill and run alongside Ken for the next half mile.

We’re both breathing hard with spit spraying out of our gaping mouths and snot flying out our nostrils.  We’re in a race.  Ken is five years older than me but the age division for this race is 50 to 59 and he’s not backing off.  The street turns to trail again for the final quarter mile and I’m able to shoot ahead of him.  I can’t wait until the last 100 yards to out sprint Ken because for one, I don’t know that I can.  And two, I might hurt myself sprinting.  My early kick pays off and I cross the finish line 3 seconds ahead of Ken in 20:28 – a personal record – having run 6:44 for my final mile.  My 6:36 pace is good enough for third place in my age division, 10th place overall.  Steve takes second place in the 40-49 group.  We win custom-made bottle openers – exactly what to expect from a Brewery.

This will be my last Texas race for awhile.  My three weeks are coming to a close.  I saw some old friends, work colleagues and family.  I ate Thai for dinner last night, Pad Ped Gang Dang with Karen’s brother Steve and his wife Susan.  We watched their daughter Lucy in a church play Godspell, with her Grandparents.  That was fun.  And I met Chris Amaro for lunch Thursday.  He’s another running buddy from Texas State.  He graduated with a physics degree and went to work in Vegas for the Reagan Star Wars industry.  He works now as a physicist for the State of Texas Department of Health.  Chris was more into marathons at a younger age, running four in high school.  He last ran the Austin Marathon in 2007, but plans to train for another soon.  I come down every year to spend quality time with my mom but it’s nice to see other friends and family and get in some low altitude racing.  My next race might be the Bolder Boulder 10K at 5,400 feet.  Adios Texas.

Kenneth Hausman is a college running buddy I met at Texas State.  Meeting up for this run is his idea.  He shows up in his Chariots of Fire sweats a half hour before the start and we warm up together.

There’s a reason they call it the Hills of Lakeway.  I might be from Colorado, but I typically train on an extremely flat trail.  This morning’s 5K has a couple hundred feet of elevation change in three miles.  Unbelievable.  The first two hundred yards are flat, then the course drops, sometimes steeply, for the next half mile.  Ken takes the lead from the start but we settle into a three man lead pack with twenty-four year old Jimmy Ivey.  Jimmy ran Cross Country for West Virginia Tech and works now as a diesel mechanic for Caterpillar in Austin.

Mostly downhill, we run the first mile in 6:38, almost identical to the start of my 5K yesterday in New Braunfels.  We chat the entire time, because Ken, an insurance agent and serial entrepreneur, is a talker.  Ken and I quiet down once we start up the next hill.  Jimmy continues talking and doesn’t appear to be breathing, so we sense we’re in trouble.  As the hill begins to steepen, Jimmy gains some separation.  A half mile later, he has 20 seconds on me.  I’m able to count this from where we turn around at the half way point.

I chase Jimmy after the turn as it’s downhill again, but he increases his lead.  I hit mile two in 7:08, again almost identical to yesterday despite the extreme hills.  Mile three though is brutal – a half mile climb.  I’m breathing like a race horse on the back stretch and lactic acid burns inside my thighs.  I’m not going to catch Jimmy, he continues to increase his lead.  I run mile three in 7:31 – a half minute slower than yesterday’s third mile.  I cross the line in 21:58, 39 seconds behind Jimmy.  For the second day in a row, I place second overall.  Always a bridesmaid.  Kenneth finishes a close third.

We feel pretty good because not only did we both finish in the top three, but there are no other fifty year olds in the top 20.  We celebrate our demonstrated vitality with breakfast tacos at Rudy’s BBQ on 620 – a quarter mile past the 2222 intersection.  Another cold and wet race on a rainy Central Texas weekend.  Not bad running weather, although not comfortable for standing around afterward.  I’m showered, warm and dry now.  Kenneth is talking about another 5K next Saturday down in Kyle.

Can you believe the size of this sign?  I suspect most college track teams don’t even have a sign.  Only in Texas.  I connected with my old team on Facebook recently.  Only see one team member – Michael (Tap) Tapscott – on this page from my years.    That guy was such a bad ass 800 meter runner.  I haven’t found any of my cross country buddies at this FB page although I am friends with one of them already.  Apparently ’80s runners don’t live big digital lives.  Considering what little running I’ve been doing the last two weeks, virtual running by finding past teammates online might be all I do this winter.

You might gain an extra hour of sleep when daylight savings ends, but I swear you lose hours to the darkness in the days after.  I only had time to run once all week.  I hope to make up for it this weekend.  Ran seven today and will run at least ten tomorrow.  I’ll somehow squeeze it all in between dropping off Jack at the dog groomers, getting my own haircut, grocery shopping, cooking, cleaning, servicing the cars, holiday decorating.  Today was a day of a thousand errands.  Tomorrow will be more of the same but I’ll get my run in for sure.  Today’s run was the quintessential fall scamper on the LoBo Trail.

The wind blew from the east with a nose of burning leaves.  Not sure what farmers roast this time of year, but the air smelled seasonal.  My thoughts drifted to Thanksgiving next week with family in Carlsbad.  Laura will have her house crafted beautifully for the holidays.  Chad will cook an unending feast with the focused fervor of Daniel Craig in the opening scenes of a Bond film.  I’ll contribute the wine.  Carlsbad has a nice running loop around the river downtown that I intend to run Thursday, Friday and Saturday.  I’ll get back on track next week.