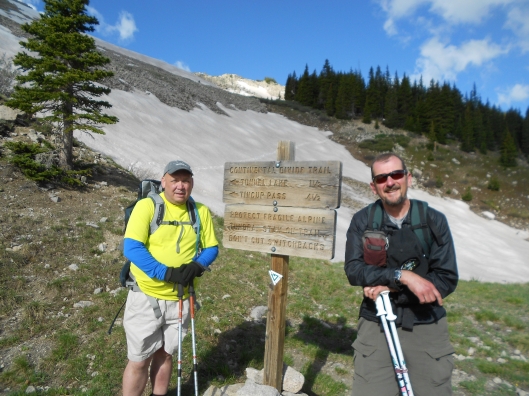 Our final morning begins with a short hike, couple of miles maybe, back to the trailhead and La Plata’s truck.  We lighten up our packs since we won’t need tents or sleeping bags for today’s hike.  We then set out on our first northbound direction toward the Alpine Tunnel.  This is what remains of an old rail line that supplied miners back in the day.  The trail itself actually follows the old tracks, although only a few timbers remain.

There is a surprising amount of snow on the trail.  Probably because the trail appears to be on the east side of a hill.  And we are just under treeline as you can see in this photo.  Each of us brought along our trekking poles in case we need them, which we do later.  Initially though this trail, following an old railroad grade, is fairly pedestrian.  Discounting the extreme altitude.

We also brought along head lamps thinking we would need them to walk through the tunnel.  We were wrong.  That’s the east portal of the tunnel behind us.  Nowhere are there any signs or clues that the tunnel has been caved in for years.  Maybe the west side is open but we don’t go there.  Instead we hike up over the ridge to Tunnel Lake.  This is where the trail becomes challenging.  Snowfields are quite large.  One forces us to bushwhack across a boulder field which is arguably more dangerous, albeit quicker to navigate.

Mike and I turn around at this lake while La Plata sprints a few minutes further to capture the pass as part of his CDT quest.  Maybe Mike is trying to get to DIA early for his flight but he leads the return at such a torrid pace I am unable to keep up.  He must have gotten in shape on this trip.

And seriously, what a week.  Every day was simply amazing but at the same time, the week was totally exhausting.  We are all ready to return home to our families, while talking about our next hike.  La Plata wants to train us with some snow and ice skills.  Mike wants to get his three boys up here.  I want a shower.  We clean up again at the Mount Princeton Hot Springs which is located on the drive off this mountain.  Three hours later I drop off Mike at DIA.  There most definitely will be a next time.