The 2012 season’s first hike and camping began not in Colorado but near Moab, Utah off highway 128 at Fisher Towers.  I drove to Grand Junction Thursday night on my journey to run the Moab Half Marathon on Saturday.  Rob was still returning from Durango where he was getting some new ink to mark the Mayan Apocalypse.  Sue hosted me and we watched 11th seed CU win in the first round of the NCAA tourney over UNLV.  Rob returned in time to see the victory.  Afterward we watched some Comedy Central shows Rob had recently DVR’d.

Friday morning the three of us ate breakfast at The Egg & I, Sue warned me to look out for Rob, and then we drove out of Colorado west on I-70.  Moab is less than two hours away and we took the exit for Hwy128 rather than Hwy 191.  Most mapping apps might suggest highway 191, but Hwy 128 is infinitely more scenic.  Plus this is the route to the trail head where Rob planned for us to get in a short hike.

Fisher Towers is a series of sandstone pillars that emerge in a southwesterly direction from a mesa on its northeastern flank.  Wikipedia describes them as “fins”  – three primary clusters of multiple sandstone spires.  These rock formations are instantly familiar as everyone has seen them in the movies or most recently in the Citibank commercial where Katie Brown summits the Ancient Art tower and stands on top.

I had suggested we get in a 3 to 5 mile run today since I hadn’t run much during the week and Rob thought this hike would be as good as any run.  Boy was it.  We started off running in fact, and I rediscovered my trail legs.  The hike is a bit technical in places, such as when we had to climb down an iron ladder.  After scaling the ladder, we turned left and co

ntinued back uphill.  We didn’t take any water on this hike thinking it would be short enough, but the dry air was aggressive in its attack to our mouths and throats.  My lips felt as if they had three  years of dead skin caked on to them.  Not bringing water was a gear fail, otherwise our shorts and t-shirts were perfect for the weather.

We watched some climbers working the cork screw summit of the middle cluster termed Ancient Art.  This was mouth-open, awe-inspiring, scary stuff.  Sometimes you forget what it’s like to watch death-defying stunts in real-life.  We watched a guy stand on the top like Katie in the commercial. For reals.  If Charlie Sheen has tiger blood, these climbers must have Mayan DNA.  Incredible!

After roughly an hour for 2.5 miles, we made the trail end.  If I described the view as high altitude desert, you probably wouldn’t be very impressed.  You have to experience it.  Hiking over the slick rock and breathing the rock-filtered air.  This is an amazing part of the world and well worth driving across the state border to hike or mountain bike.

The trail wasn’t crowded exactly, but we had company.  The trail head was full of cars, but mostly for climbers.  As we turned to depart from the trail end we encountered 3 sirens.  They nearly talked us into staying before our thirst brought us to our senses and we continued back to the trail head.  We discovered this rock window on the return – not sure how we missed it on the way in.  I could picture Wilma serving up a rack of dinosaur ribs to Fred at this spot.

I can’t faithfully recount every sight on this most visual hike.  There was also a flock of teenage hikers strolling barefoot across the trail.  Natives. 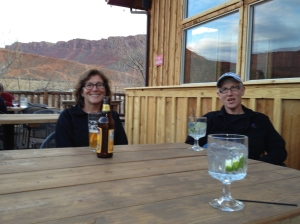 Back at the car we drowned our thirst with bottled water.  We then headed toward Moab on Hwy 128 and stopped near Negro Bill Canyon to stake out a camping site.  After pitching our tents, we resumed the trek into Moab for lunch, our race bibs, and beer at the one state owned liquor store.  We spent the remainder of the day ensconced at our camp site drinking beer until it was time to meet up with friends for dinner at The Red Cliffs Lodge, where we continued drinking and generally prepping our bodies for the next day’s half marathon.