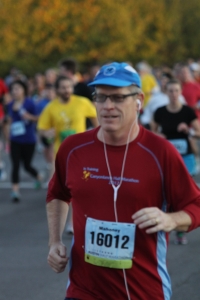 I initially thought this picture from the Austin Half Marathon was fuzzy because I was moving too fast.  That’s just the way I think.  But after seeing how slow I appeared in some of the race video, I now suspect it’s simply a blurry shot – maybe the cameraman was moving.  And my runs this weekend add further support to this second opinion.  Man did I run slow Saturday and Sunday.

That’s okay I guess because I really just need to get in the distance to prepare for Moab next weekend.  Speed isn’t necessarily important.  I had a really good run on Friday though in which I felt fast.  Felt like I was back at sea level in Austin.  More likely my body was just well recovered from not running the three previous days.  It was a busy work week and the runs I did pull off on Monday and Friday were short.  Despite running an old man’s pace this weekend, at least I got in two back-to-back 6 milers.

Work will be just as busy this week – especially since I’ll be taking off Friday.  But I just need some short runs.  Ideally I’ll get out every day.  Distance won’t be any more important than speed – I just need to maintain.  Daylight savings will give me more time in the evenings so that should help too.  I have a business dinner Wednesday but maybe I can squeeze in a short run before hand.  Thursday isn’t likely since I’ll be driving to Grand Junction to meet up with Rob.  Perhaps we can pop off a few miles Friday morning before heading on to Moab.

The half marathon is Saturday.  Moab will be number two out of three half marathons I’ve registered for this late winter/early spring.  The first was Austin and the third will be Boulder in another three weeks.  I haven’t scheduled my summer events yet.  I’m going to finish this half marathon trilogy before designing my next challenge of 2012.