My first night of camping in 2012 went fairly well.  It didn’t rain and the wind didn’t start up until late morning.  I woke up refreshed, despite the previous day’s countless beers.  Rob and I drove into Moab well before the 8am cutoff time when they would close Hwy 128 for the run.  It was barely after 6am when we walked into the Red Rock Bakery and Net Cafe.  And net cafe is an apt name – their wifi is screamin’ fast.  We had coffee of course, a cinnamon roll and banana.  We hung out longer than necessary to eat since we were fairly early.  The buses wouldn’t load up until 7:30.  And the bakery bathroom was going to be as good as it gets for some time.  I took the opportunity to catch up on IBM email since I’d taken Friday off. 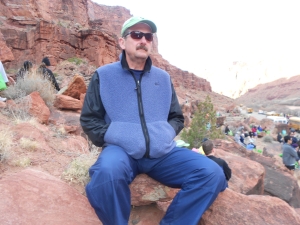 Around 7:30 we left the bakery and car parked out front to walk over to Swanny City Park for the bus shuttle.  We weren’t in a hurry since this was a hurry up and wait scenario.  The sooner we got to the bus drop-off area, the longer we would have to wait sitting on rocks.  We took a 7:50 shuttle.  20 or 30 minutes before 10am, the race director instructs everyone to walk the quarter mile or so further up the hill to the race start.  A couple of gear drop-off trucks are on the way.  I committed to a short sleeve shirt and threw my gear bag in with the lot.  This was a little risky given the strong wind but it wasn’t as cold as last year and short sleeves would have been fine then once I got running.

The race starts on a hill top where the wind howls non-stop.  Enough to make me want some warm fleece, or someone to spoon with.  We ran into some of the ladies and told them we’d be starting at the 2 hour pace sign.  I expected to run under two hours but hoped to start off at a 9 minute mile pace for the first mile if not two in order to loosen up without tiring from oxygen debt.  There would be plenty of miles to speed up later.

The guys never showed up, although they could have been standing almost next to us and the crowd would have made it difficult to know.  I found out later Keith was in fact in the 2 hour group, ahead of us and on the right bank.  We were center and toward the back of the group.  Amazingly, we would run almost the exact same time and never see each other. 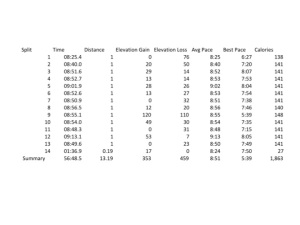 But I don’t know Keith’s splits.  Mine are in this graphic, and you can read them well enough if you click on the picture to enlarge it.  I started off too fast with an 8:25 pace the first mile and 8:40 the second.  This was fine for Rob as he left me after two miles and apparently sped up as he finished with an 8:22 overall pace.  Once I slowed down, I felt great.  I was more interested in running comfortably than speedy, and that’s what I did.  I’m somewhat impressed really at how consistent my splits are.  Eight of my 13 miles are in the 8:50s, and of course my overall average was 8:51.  I even ran the 9th mile, which as you can see from the elevation stats (or elevation profile map) has the big hill, in 8:55.

I’m disappointed that I slowed down to 9:13 on the 12th mile.  I had planned to run hard from the top of the 9 mile hill to the finish.  I did do well in mile 11 but the wind on mile 12 was a real bear.  And it was up hill again.  Many people think this course is essentially a downhill run.  The elevation map makes it appear that way, but actually for every 4 feet of elevation loss there are 3 feet of gain.  It’s a hilly run.  At altitude.  Something about the canyon though just sucks you in and makes you want to run this course fast.  Running into mile 10 is one of the coolest parts of this course.  As I see the canyon walls narrow up ahead I can’t help but think, “Indian ambush”.  Before I know it I start to hear drums.  I suspect maybe I’m hallucinating and tell myself to drink water at the next aid station.  The drums beat louder as I close in on the end of the canyon – nearing the junction where Hwy 128 will turn left onto Hwy 191.  That will start the uphill headwind toward the finish and I do expect that to be a battle.  Suddenly I turn a bend and come face-to-face with the green drummers.  Sort of sounds like they could be playing an Irish tune in honor of St. Patties Day.

Rob and Kelly sped through the Canyonlands with really good times.  This is Rob likely shouting “mahalo” to the cameraman and Kelly is in the red and white shirt in the first pic at the top of this post.  They didn’t seem to notice the hills and wind.  I’ll point out that neither of them beat my time from last year of 1:47, but I’ll admit the wind was considerably stronger and more persistent this year.  I’d like to know their splits on mile 12 when running into the head wind from hell.  There was a guy earlier in the race, maybe as early as mile 6, but somewhere in the second half that an aid was trying to pull off the course because he looked ready to topple over.  Safe to say he didn’t make it past mile 12.  Perhaps if I’d started out 20 seconds or so slower per mile I might have been able to keep up with Rob longer.  Or Kelly if I would have found him before the run began.  I didn’t exactly push myself to run hard in this event, but might have run a bit faster if I had someone to pace with closer to my speed.  I suspect if Keith and I had run together we would have run about a minute faster and felt none-the-worse afterward.  I didn’t even put on a kick.  I rarely do nowadays.  My final mile was in 8:50, again in line with my 8 splits in the 8:50 range.  That’s Keith in the pic below in a dark t-shirt with Steve – who also ran the same pace as us.

Despite the wind and hills, and the earthy-tasting, rock filtered air that clogged my mouth and throat, this year’s run was quite successful for my neighborhood.  Susan ran an unbelievable pace and the four of us that make up the twelve oclock running club all finished in under 2 hours.  Coach Jabe had a nice turnout from her training team – several running their first ever half marathon.  In fact, I don’t think Barb had even run a 10K before and yet she completed this challenging run like a seasoned pro.  Jabe is pictured below with the white hair and denim jacket. 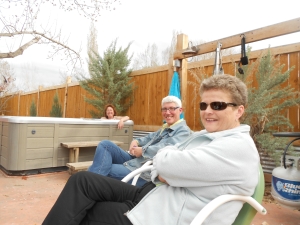 As Rob and I were camping, we took advantage of Jabe and Eve’s hospitality to shower at their condo.  Actually Rob showered, I bathed in the hot tub for an hour drinking beer like camper trash.  The rest of Team Prospect came over later for dinner.  Camping out Saturday night was much less enjoyable than Friday as the howling wind made sleep difficult.  I returned to the camp site to discover my tent upside down and twisted from the wind.  Only laying in it kept it from blowing away.  At times the wind would completely flatten it over my body, which leaves me quite impressed with the flexible strength of my poles.

It was too windy to make coffee Sunday morning so Rob and I drove into town for breakfast at the Jailhouse Cafe.  Power was out all over town when we arrived so we had them heat us water from the gas stove which we used for our Starbucks Via Ready camping coffee.  The power was out from the wind but came on soon enough that we were able to order a hearty breakfast.  I dropped Rob off in Grand Junction and made it home by the afternoon.  I weighed my self to discover I somehow gained 5 pounds in Moab.  WTF?  I’m suddenly 195.  Apparently a mix of lactic acid and beer.  So I’m going two weeks – up until the Boulder Half Marathon – without drinking alcohol.  It’s been a week now and I’m back down to 190.  Actually 185  after a massive weekend of running, but that’s likely temporary from sweat loss.  I figure I drink 300 calories in beer and wine per day.  Minimum.  That adds up to a full day’s calories per week.  If it helps my weight, I might continue the booze free diet longer.  Depends how thirsty I get.