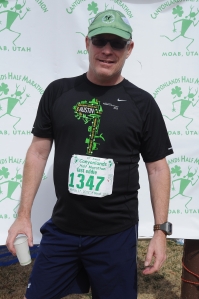 With the Austin and Moab half marathons behind me, and spring having launched this past week, I’m officially in spring training.  Daylight savings time has allowed me to move my runs to after work which gives me time to run farther.  And so I’ve begun to run a route that’s 6.8 miles.  But this weekend I really kicked it into gear, running 10.4 miles Saturday and 13 miles Sunday.  I ran pretty slow on both days – in the range of ten minute miles.  But these trail runs are seriously hilly.

The East Boulder Trail I ran on Saturday begins and ends with a 3 mile section of massive hills.  And Sunday’s run at Heil Valley Ranch goes up until I turn around.  I didn’t time myself because I expected to be crawling and I was.  Of course it’s downhill all the way back but my legs were too wasted to take it fast.  This is an extremely rocky trail, one that I’ve fallen hard on in the past, so I maintained control and focused on my foot work.  The uphill slog is all about thighs and foot work while the downhill return is all about knees and foot work.  The foot work is because of the rocks and is fine because I need to rediscover my trail legs since I intend to run several trail events this summer.  And my knees held out ok on the way down since I went slow enough.

A biker called out to me on the incline that he was impressed I still had the knees for this punishing trail.  The backwards compliment didn’t occur to me then and I shouted back that my knees are fine going uphill.  Later I realized he was also suggesting I’m an older runner.

This trail was actually crowded with bikers – it was a perfect spring morning with a cloud cover that never fully dissipated and a strong enough breeze of crisp cool air to keep me from over-heating without water for 2 hours.  Each time I passed some bikers either they would stop or I would pull over to let them pass.  There is official etiquette on who should yield to whom, but I make the call each time based on situational merits.  If they look like they will stop or if they need to stop, I’ll keep running.  If they look like they need to keep their momentum more than me or if they simply look strong, I’ll yield.  Sometimes there is room for both of us to squeeze by without stopping, but it is single track.

There’s typically a polite exchange.  If they pull over I say something like, “Thanks buddy”.  I received quite a number of “nice run” and “looking strong” comments.  Bikers always think runners have it tougher on hills.  But the very last biker to speak to me in the final mile said this as I pulled over for him.  “Thanks sir.  Have a good run.”  I shared little dialogs like this with over 20 bikers easily.  Some were even awkward as we would both stop not knowing who should yield.  Despite my exhaustion at this point, this guy irritated me.  Who the hell is he calling sir?  That’s fine when the bag boy says sir to me at the grocery store, but out here on the trail, when I’ve just completed 12 miles at altitude, don’t call me sir!  I’m on par with everyone out there, regardless of their age.  I passed my share of bikers, and other runners, both going uphill and back down.  I’m not a “sir” running like that, I’m a total bad-ass.  That skinny little runt probably didn’t even bike to the top.