The best perk from the Colder Bolder is the free professional photos.  This is the second year they have provided them at no cost.  Well, I imagine the cost is buried into the registration fee, but typically race photos can cost as much or more than standard entry fees.  This is a sweet deal.  Tom Bartel suggested to me that they might  burden the photographers with this as part of granting them the Bolder Boulder gig.  Maybe it’s even a competition.  There were two photographers on separate sides of the bridge over Varsity Lake.

If it is in fact a competition, then I think the photographer who captured me spitting in the picture above deserves honorable mention.  How’d he do that?  This is a first for me.  I actually have two shots detailing the progression of my spit’s trajectory.  It’s fascinating to flip through them. 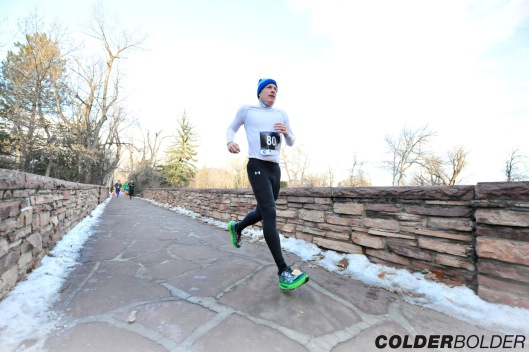 Race photos are awesome for reviewing your form.  This shot depicts me over-striding a bit.  I’m not overly concerned since this is with less than a half mile remaining and I suspect I was picking up my pace.  I’m probably also compensating my form for my hamstring pull.  I finished 21 out of 29 runners in my heat.  One of those boys behind me is actually from the heat that started after mine.  He is the only runner to pass me as he finishes first in his heat.  I also discovered from the results that I never did pass the four women in my heat.  The 10 year old girl I passed started in the heat before me.