Anyone who has ever talked to me for more than five minutes will tell you I can appear obtuse.  Like a child not listening to his parents, sometimes my focus is elsewhere.  But after awhile, even I can take a hint.  Saturday’s WSJ had an article on aged travelers.  The lead story in this weekend’s Barrons is on financial planning for aging parents.  And my aging, 80-plus year old in-laws drove up 1100 miles from Austin to spend the weekend.  80 is the new 60.  This is them in the photo above, today in Grand Lake, Colorado.  So this blog post is about aging runners; something I can speak to from experience.

Tip number one for aging runners, dress your age.  Cover your glutes and wear a freakin’ shirt!  You might be proud of your flat abs but old man skin has a sheen somewhere between dull and nauseous.  Think of the children.  Golfers wear a collar.  It’s not cricket for runners over 50 to go shirtless.

Make no mistake, older runners are competitive.  And fast.  A 50 year old, Johannes Rudolph, took third place overall for men in last weekend’s Boulder Marathon in 2:52:05, while the first 20 year old finished close to four minutes behind me.  This might be more anecdotal than scientific, but I find race results to be much more competitive in the 45 to 65 year old age divisions.  It makes sense that we regain our lives back after the kids become self-sufficient and the career plateaus. 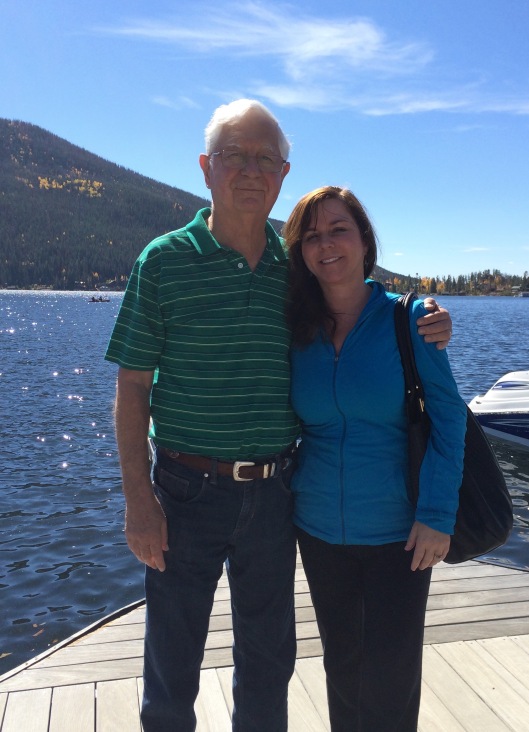 Next tip is to race in the same shoes you train in.  I’ve learned that even when I intend to run hard, there’s no sense in wearing minimalist racing flats.  There might be exceptions in some 4 mile cross country race where spikes are needed, otherwise your tendons don’t need the stress.  You’ve probably learned by now it’s better to wake up at the same time every morning, even on weekends, than to sleep in.  Maintain consistency in your shoes too.  This photo above captures Karen with her Dad.

My return to running the last few years already makes me feel young.  Races transport me back to high school.  I don’t have to compete with younger athletes though on every level.  They can run shirtless.  Let them run barefoot.  My focus will remain on mitigating injury.  Taking off six weeks to recover is the same nominal stretch of time for kids as it is for seniors, but we lament the time lost as if we may never return to running again.  There’s a desperation with age, like sand pouring through the hour glass while Dorothy wears her red slippers.  I know that I cherish my runs.

Injury happens though.  Make the most of it.  I could only walk for five weeks last year after my prostatectomy, and had to limit my running distance to just three miles for another five weeks after that.  I came back six months later to run my fastest marathon ever.  That time off was arguably good for me.  Prior to surgery I developed a worsening knee injury.  My physical therapist, who was supposed to be teaching me how to urinate again, instead focused on my running concerns – at my request.  I tell you this in confidence so don’t share that with my insurance provider.  She taught me several exercises for my abductors and adductors, which I continue to perform nearly daily, that strengthened my knee.  If you have to abstain from running, use your time constructively to strengthen your core or other muscle groups you typically ignore.  Of course, it doesn’t have to be injury.  Work or other life events can also take you out for weeks or months at a time.  Know that three weeks won’t impact your conditioning.  If longer, you’ll need to do something.  You can do planks anywhere, anytime.

As you can see in these photos, we drove up to Grand Lake today over Trail Ridge Road to view the turning Aspens.  Gorgeous day.  You might notice I finally stopped trying to look young and whacked my hair off.  I had a business trip that sort of required a more professional look.  Had it been to the west coast, I’d have kept it long, but it was to the east coast.  I’ve decided to grow a beard though when I turn 60.  I never have before because it grows in colored patches.  That looks as bad as it sounds.  But my hair should be entirely gray in a few more years.  Silver linings.