Not the best week to jump from 3 to 8 mile runs.  At first I thought maybe I fell drastically out of shape.  I was running so slow it was hard to keep my balance.  I ran faster though under cooler clouds Thursday.  That confirmed for me that I am acclimating to the heat.  And that I need to increase my focus on hydration.

I ran 12 miles Saturday on the LoBo Trail.  The weather was in the 70°s.  I can handle that.  I wore my camelbak to remain well hydrated.  Felt strong.  Safe to say I’m recovered and I’m back.  My expectations were to not be running for three months after my surgery.  It’s only been two months and I’m back to running my old workouts.  Maybe I should be bummed over having had cancer.  Instead I feel fortunate.  And 28 grams lighter. 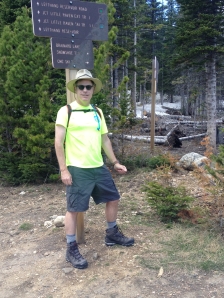 Acclimating to the heat is one thing.  To prep for my 80 mile backpacking trip along the Continental Divide at the end of June, I need to acclimate to the altitude.  One mile high isn’t good enough.  I need to get closer to two miles high.  So that’s what I did this morning with Ellie.  We drove up to Brainard Lake and hiked on the snowshoe trail.  We could have used snowshoes in fact, the snow was several feet high in spots.  It was good we both wore hiking boots and that we brought trekking poles.  I didn’t expect this much snow at 10,000 feet, but apparently Brainard Lake is on the northeast side of the mountain.  The road up to the lake itself is still closed.

We lunched at the Millsite Inn.  The waitress said they just got a four foot dump of snow over Mother’s Day, and that it even snowed a bit early this morning.  The Inn was out of many of their menu items – as usual.  They said they were low on supplies due to the winter.  Never mind they are open throughout the winter.  Still, we had some good cheese burgers and listened to live music.

I was happy to test out my new hiking boots today.  I post-holed several times into hidden streams flowing under the snow packed trail.  The water-proof feature works.  I’m not used to wearing boots and they feel a bit odd.  Still, these Salomon Quest 4D GTX hiking boots are extremely light.  I just need to get comfortable with the large footprint.  Ellie and I plan to hike together the next couple of weekends.  I need to find some trails at higher elevation that aren’t buried in snow.  I’m currently reading through a trail book for Rocky Mountain National Park. Any suggestions, let me know. 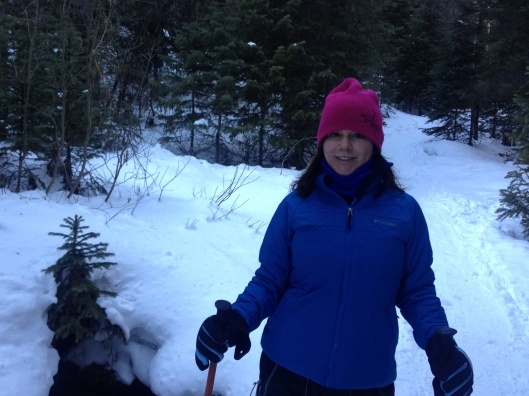 How can anyone resist snowshoeing at a trailhead called Peaceful Valley.  Karen and I couldn’t.  I initially planned another trail up at Brainard Lake, but this is closer.  We had a later start today and this saved us about 15 or 20 minutes.  The parking is just off the highway.  The entrance to the campground is closed off in the winter, but there’s about 100 yards of road to park on.  By the time we finished, others were parked out on Hwy 72. 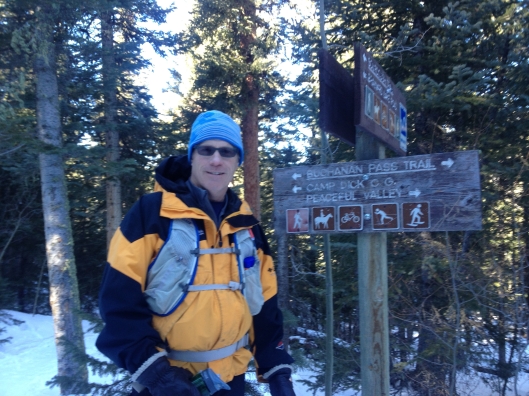 We took the Buchanan Pass Trail.  This starts down the road a couple hundred yards or so past the first gate.  Actually just in front of the Peaceful Valley Campground which has a second gate.  The trail begins with a climb and is super pretty, in the trees and lined with natural boulders.  My Garmin captured 12° but it felt at least 30°, and the wind was only about 4 mph.  With a cloudless sky, the Colorado sun lit up the snow for a gorgeous day.

We were passed by a Tokyo Joe’s team of 8 or so mountain bikers.  Click on the pic and check out these fat tires!  This looks really cool to me.  We had a decent workout, completing 3 miles at a 2 mph pace.  Thirty minutes faster than last weekend.  Karen thinks this trail is less technical.  The snow was fairly well packed too.  This is clearly a high use trail.  It’s a shared trail and had more cross country skiers than hikers snowshoeing.  Dogs are allowed and there were plenty.  One dog wore boots.  Definitely a dog day out there.  We were shedding gear on the way back.  I even took off my gloves. 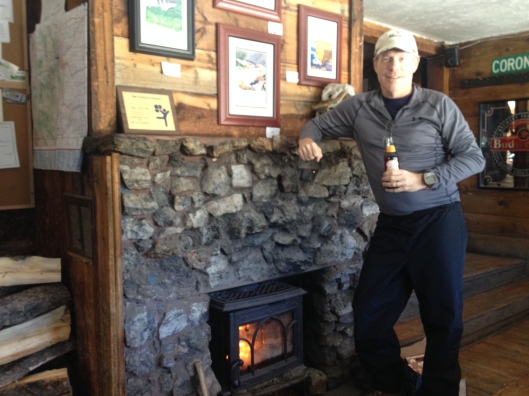 We found ourselves back at the Millsite Inn for lunch.  The owner, Kurt, is quite a character.  He looks about 65 – hard to say.  Could be older.  He said he played NCAA Basketball for Ohio State – he looks about 6’4″.  He tells us stories of his snowshoeing and skiing.  He showed us pictures he took today of some snowshoe hares.  Stunning photos.  This is two weekends in a row snowshoeing for us.  Our goal is to hit the next three weekends before I head to Austin for the Austin Marathon.  I should probably be getting in more running miles, but I don’t intend to run that race very hard.  And I’m a big proponent of mixing up workouts – even though I’m generally bad at it.  If I do well in Austin, I’ll publish a book on how to snowshoe yourself into shape for a marathon. 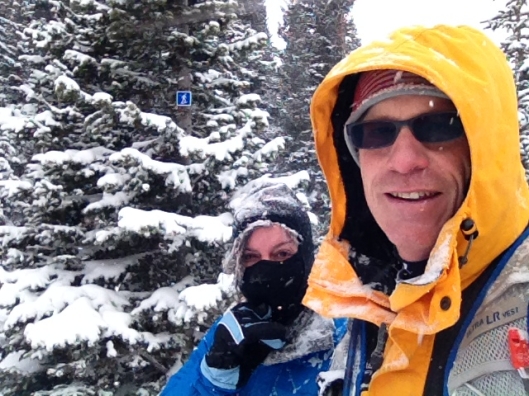 Santa brought Karen snowshoes for Christmas so today we headed up to Brainard Lake.  We wanted to watch the Broncos play too – which we are doing right now – so we headed up early.  Even without a game to get back for it’s generally a good idea to get up to the mountains early.  The wind was expected to increase in speed each hour, and did.  Plus Brainard Lake is one of the most popular winter recreational areas in Boulder County.  Carousing with the Prices and Sebestas last night didn’t help us to get an early start, but we reached the trailhead around 9am.

We drove through Lyons to get there.  The turnoff to Brainard Lake is just north of the turnoff to Ward on the Peak-to-Peak Highway.  It was snowing but drivable.  The parking lot at the trailhead only had a dozen or so cars.  I think they built this lot in 2010/2011.  It’s pretty big.  The wind was howling like a banshee.  We put on our gear sitting on the back bumper of our Honda Odyssey under the shelter of the hatch.  We practiced at home to size our boots to the shoes and ensure we were familiar with the new gear.  Still, the cold wind in 23° was brutal.

The wind was totally absent in the trees, once we were on the trail.  We took the snowshoe trail that veers south or to the left of the Brainard Lake road.  It heads west toward the lake.  I felt like we were snowshoeing through a Hallmark postcard.  No wind.  Falling snow.  God’s country at 23°.  I wore my new Sorel Conquest snow boots that Karen gave me for Christmas.  I’ve never had a quality pair of snow boots for hiking or snowshoeing before and these are so nice.  They are super light, water proof and have a built-in gaiter.  We were both comfortable in our gear.  Karen wore a balaclava to protect her face but my face was fine bare. 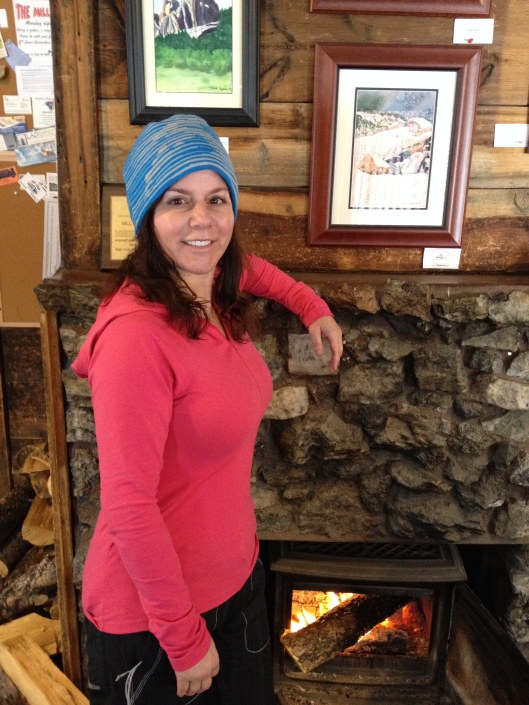 The wind didn’t hit us hard until our turn-around point where the trail crosses back over Brainard Road.  This is right at 1.5 miles.  We planned to take the road back if we were tired but we weren’t.  Good thing because even though the wind would have been at our backs, it didn’t look very enjoyable.  Visibility on the road was poor with near whiteout conditions.  It took us just over an hour to reach the road, maintaining a 1.5 mile per hour pace.  We returned back through the trees.  The wind was noticeably stronger, but mostly above our heads in the tree tops.  Plus it was at our backs so going back was fine.  A number of hikers were just headed out.  They would have to deal with tougher conditions than we did.  We encountered a mountain biker with the fattest tires I’ve ever seen on a bike.  What a bad ass.  It didn’t seem possible but the wind was blowing even stronger in the parking lot as we completed our trek after 2 hours and 10 minutes.  The lot was much more full.  Apparently not everyone planned to watch the Broncos later in the afternoon.  We had time to stop for lunch at the Millsite Inn on the way home.  We ate an awesome pizza fireside.  We plan to return back to Brainard Lake next Sunday.