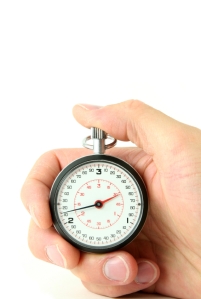 My training for the Bolder Boulder is a bit behind schedule.  Work, taxes, and other priorities have taken precedence.  I have four workouts now though that I have timed and I’m seeing a drop in my average pace.  I wouldn’t say it’s enough to note a drop in my lactate threshold, which is the goal, but I feel good that I’m measuring my progress.  I also gained some confidence after getting in a speed workout today.  It wasn’t a fartlek but rather a two mile warmup followed by three miles at my half marathon race pace, followed by a two mile cool down.

I averaged a 7:27 mile pace for the three miles I ran today at race pace.  I would say that is my current lactate threshold.  It compares with my three half marathons I ran this year.  I ran a 7:48 pace for Boulder, a 7:31 pace in Moab and a 7:23 pace at Austin.  I might not have enough time to lower this down to 7:00 even, but that’s my goal.  I have five weeks. 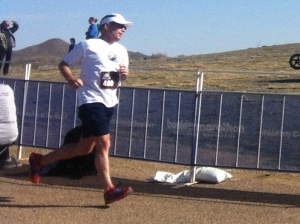 Karen snapped this pic of me with both feet airborne and Haystack Mountain in the background.  I’m partial to pictures of me airborne.  I don’t know why, just am.  But this relates to my story too.  And I know I blogged on this topic recently, but I’m still thinking about it after an email exchange with my buddy Ken.

My next planned running event is the Bolder Boulder 10K on Memorial Day.  Ken just ran the Capitol 10,000 in 45 minutes.  Good enough to place him 4th among 55 year olds.  After telling him it’s been 20 years since I ran that fast, Ken suggested my half marathon pace supports my ability to run a 45 minute 10K.  But my experience suggests otherwise.  I’ve documented this.  My pace doesn’t vary much whether it’s a 10K or a marathon.  I even tested my ability to run faster Sunday by pushing myself into oxygen debt in the first mile.  I can run a 7:30 pace all day long but I can’t hold 7:00 for more than a mile.

Don’t think I’m ready to throw in the towel though.  This just means I need to train for speed.  Ken suggested I train at a lower altitude and he’s right – that would work.  It’s not very convenient, but it would work.  I think.  I don’t understand the science behind it but you can push your heart rate higher at lower altitude where the air is thicker.  I suspect training for a 5K or shorter distance would benefit most if performed at sea level.  And I would think training for half marathons and marathons benefit from altitude – 4000 feet or higher.  10Ks are questionable and I am willing to bet a mix of training at sea level and altitude would be ideal for that distance.  And as that hybrid scenario suggests and I’ve already stated, spanning geographies is not very convenient.  Click on this link; there’s a company in Boulder that provides supplemental oxygen equipment to train at low or high altitude regardless of where you are.

But for a 10K, I should benefit by doing some speed work out on the LoBo Trail.  And per my earlier post on this topic, I intend to do that by running fartleks.  I did try a fartlek workout a couple of weeks ago.  I nearly lost my beans, but then that’s the point – adapting my body to recover from the limits of reaching my top speed.  I’ll try to do this more between now and Memorial Day. 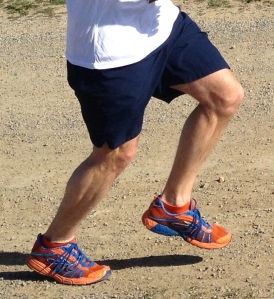 I can tell you another method for improving speed is running with a foot strike that is mid to fore foot.  Avoid over-striding and landing on your heel.  I already land mid foot and don’t see myself changing much more to the ball of my feet, but I am sharing this as part of the discussion.  And this is where the airborne pic comes in.  Studies support the notion that the more time you spend with both feet airborne, the faster you run.  There are different techniques for achieving this flight, and one is the bio-mechanics of moving your center of gravity forward by avoiding heel strikes which stop your momentum.  It also helps to keep your toes pointed downward, which is something I am doing in this pic but also a technique I am still working on.  This is essentially a shorter stride which some people look at and think is less efficient, but it actually promotes speed.  Running occasionally in minimalist or barefoot running flats helps to teach this form.  I did this about a year ago, not to improve my speed but to recover from plantar fasciitis.  It worked.

I’m going to focus on the fartleks.  My goal is to run a 45 minute 10K two months from now.  Not to take away from Ken but a 45 minute 10K will not be nearly as competitive in the Bolder Boulder as the Capitol 10K in Austin.  This is freakin’ Boulder.  But it’ll feel pretty fast to me. 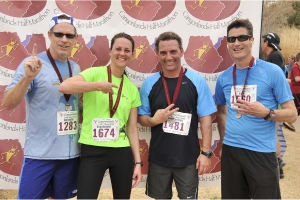 Here’s part of Jabe’s Running Group in Moab.  I had a discussion recently with a friend about ten years younger than me on our respective optimal running distance.  The conversation started discussing a 5K we ran together last December. He said either a 5K or 10K was his best distance.  I responded that the half marathon was mine.  Distance running gets easier with age.  Not that you speed up necessarily but the distance becomes more comfortable.  I believe it is true that you can continue to build aerobic capacity with age; although you certainly lose speed.

I’m not sure how I feel about this.  I think I want to run a break-out Bolder Boulder this spring.  Maybe not the 6:35 pace I ran it in 23 years ago, but I’m seriously thinking under 7 minutes per mile.  I did run a couple of 5Ks last December and couldn’t break a 7 minute pace but that’s sort of to my point.  I should be able to run shorter distances at a faster pace.  I should be able to put on a kick at the end of my half marathons instead of needing to cool down.  Question is, how to get faster?  Without throwing up.

I’m not running intervals on the track.  Certainly not repetitions.  The plan is to mix some speed play into my distance runs.  This is known as running fartleks and is a nice way to get in a track workout on the trail.  This could possibly help me run stronger in the Boulder Half in April but I’m really doing this to run faster in the Bolder Boulder 10K, which isn’t for another two months.  I suspect the best way to improve my half marathon and marathon pace would be to simply lose weight, but that’s not something I care to do.  I’m good with 175.  I still have a bit of a paunch, but it looks fine in a sports coat.