Today marks our sixth consecutive drive up to Eldora Mountain Resort for Ellie’s snow board lessons in the Eldora Kid’s Trek Program.  Certainly not our final drive up but Ellie’s last lesson for this course.  She has a coupon for a discounted private lesson that I intend to schedule after my return from Austin in March.  And the first full week of April is spring break.  I told her I would snow board with her then.  It’s been six years for me.  Last time snow boarding, I broke my ribs. Maybe I need lessons.

I snowshoed with Marilee.  We hiked the Lonestar Loop counterclockwise, until we lost the trail.  We wound up returning on the Rising Sun Nordic Ski Trail.  Fortunately we weren’t seen by any Nordic skiers.  Despite the snow this past week, we trekked across a couple of bare spots.  But then, it’s also been 70° the last few days.  Mixed blessings.

Marilee and I lunched with her friend Nancy at the Sundance Cafe.  Great menu with awesome views, located about a mile outside of Nederland toward Black Hawk.  I ate a bison burger with Brie and jalapenos.  They have a lodge too.  This photo captures Emma leading Ellie down the hill.

I dropped the distance of my Saturday run down to ten miles.  Saw Amy riding her bike on the LoBo Trail.  I probably won’t exceed six miles on any single run this week.  I’m in super taper mode.  My focus is now on nutrition and not hurting myself before next Sunday’s Austin Marathon.  I think my pace will be posted to Facebook at key intervals.  Hoping to have a good run.  Seven more days.

I wasn’t the only one out running on the ice this week.  I shared some “are you effin’ kidding me” looks with a few others on the LoBo trail.  The week before, I couldn’t get over the snow.  My runs were necessarily short given the exhausting conditions.  I donned snowshoes one day and ended up with a blister that I’m still feeling.  It was a poor week for running.  I commended myself for simply getting out at all and figured it couldn’t get any worse.  I was wrong.  It wasn’t safe to walk down to the coffee shop this week, let alone run.  We began with a foot of snow and below freezing temps.  Then, in half a day, the mercury rose by 50°.  Only in Colorado can that happen.  The flash-melted snow refroze as ice later that same night, so perfectly you could ice skate down the sidewalk.

Running was unthinkable and I lost a couple of days.  I know how unwise running was because I tried the day after the big snow-to-ice conversion.  Got in four miles.  Not sure how to describe my form.  I kept my stride as short as possible without actually standing still.  My effort was extremely taxing on my quads and groin.  There were countless out-of-control moments where I thought I was going to die.  It was not enjoyable and I spent the next two days indoors looking out the window like Sally and her little brother in the beginning to The Cat in the Hat.  Conditions were reasonably better Saturday and I skated for twelve death-defying miles, with a similar super short, groin-stressing stride.

This is not ideal considering I’m training for a marathon.  I have five weeks to step up my distance.  With Ellie’s snowboarding lessons every Sunday, my only chance for the requisite twenty mile training runs is Saturday.  Fortunately I ran some twenty milers back in December.  I don’t need to run  massive miles every weekend, I’d settle for two such runs before February.  January has three more weekends in it.  This is why Colorado runners plan their marathons for the fall, after a long summer of optimal conditioning.  I’ve run two Austin Marathons in February and three Denver Marathons in the fall.  Despite the altitude difference, I’ve yet to run as fast in Austin as I do in Denver.  It’s difficult to train sufficiently for winter marathons.  I’m happy with my snowshoe training though.

I snowshoed the same Lonestar Loop today that I did last Sunday, but this time I found the spur to the Tennessee Mountain Cabin.  This added nearly a mile for a five mile, two hour effort.  Trekking counter-clockwise, the right hand turn to the cabin is at 2.3 miles, at the second intersection with the Rising Sun ski trail, a full mile after passing the high point sign.  That first 1.3 miles present a 700 foot climb.  The cabin housed some lodgers but they showed me inside.  Nine of them slept comfortably overnight, kept warm by a wood burning stove. 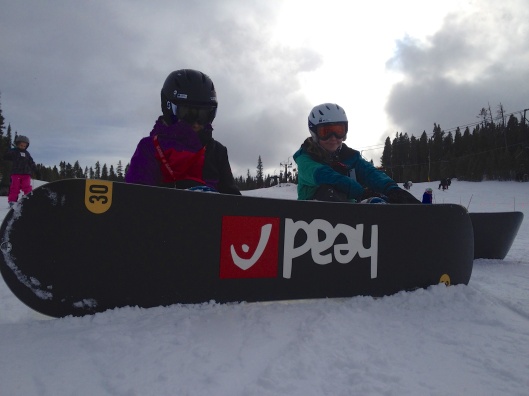 The girls had an awesome day with their snowboard lessons.  Zero wind today made the 20° feel warm.  This photo captures the only sun I ever saw today.  The clouds were black with snow, which fell heavy throughout the day.  This completes two of the girls’ six Sunday course.  Julianna, their instructor, praised their coordination and balance as they steadily progress up the mountain.  The girls are having fun while I get in some high-altitude hill training.  Maybe not your conventional marathon workout, but works for me.

Winter recreation is exhausting.  Ellie and Emma began their six week snow boarding course today up at Eldora – in 20° and 30 mph winds.  They loved it nonetheless.  I snowshoed at the Eldora Nordic Center while they snow boarded.  Ellie is dead tired.  I take a perverse pleasure in being able to physically exhaust a kid.  But I’m much more beat.  The trails at the Eldora Nordic Center are hilly.

I paid $20 for the Nordic pass.  Compare that to a lift ticket.  Although I’ll be doing this again for the next five Sundays.  Karen will likely go with me.  She remained behind today to teach an aerobics class.  Emma’s mom plans to snowshoe with us too on occasion.  I expect this Nordic Center to really work out well for us three as it contains a series of concentric loops at various distances.  Concentric might be a poor word choice.  The loops don’t have a common center, rather they all start from the Nordic Center Lodge.  We can start out together, but I can go for a longer distance.  I trekked the Lone Star Loop today for about four miles.  There’s a spur off to the Tennessee Mountain Cabin that would add some distance, but I missed the sign for it.

Today’s little winter fun marks the end of my Christmas Holiday.  Actually, I worked Friday.  Still, this weekend feels more official.  It’s been a big two weeks.  A trip to Texas.  And the other day, Ellie rescued two puppies.  After Jack’s passing, I told her she could get a puppy in May, so that she would have time to train it once school is out.  Not only did May become January, but Ellie elected to adopt two dogs.  I’m mixed on all this, but they are cute.  Meeko is on the left, weighing in at two months.  And Millie is on the right, she’s four months.