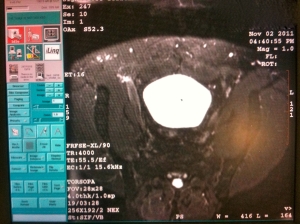 Today was the big event – my first MRI.  I woke up to a half foot of fresh snow.  Much less on the sidewalks and roads.  Not that it mattered, my appointment wasn’t until late afternoon.  The roads were dry and clear by then.  I left a bit early anyway since I’d never been to the Lafayette branch of the Boulder Community Hospital.  Good thing as I mistakenly drove to the Exlempa Good Samaritan Medical Center first.  I figured it out after Registration couldn’t find a record of my appointment.  Still made my appointment on time as the two medical centers are located fairly close to one another.

Registration was quick although Cigna never called in my negotiated rate.  I know I will eventually owe 20%, but don’t know what the 100% is yet.  Fortunately I did not have to pay in advance.  I understand MRIs to cost over $3000.  The Cigna negotiated rate should be about half that, give or take 10%.  I was still ahead of schedule and sat down to read my WSJ that I brought along.  I brought my own newspaper for two reasons.  First, it was delivered late today due to the weather so I wasn’t able to read it in the morning.  Second, I’ve been disappointed lately with the lobby magazine selection in medical offices.  And I say this from experience having been to three others in less than a week.  My Primary Care physician is a woman which might explain the literary tripe in her office.  Then the Orthopedist had a bunch of Yacht Club magazines.  Who the hell even boats in Colorado let alone owns a yacht?  And to his credit, the Podiatrist at least had Time Magazine, but still, my erudite tastes are particular.  I read the Internet.

I just completed a survey of the page one index when the MRI tech stepped in to escort me to the lab.  The MRI room.  The magnetic resonance imaging facility.  We exited the back through sliding doors and walked into the parking lot as she droned on about why her MRI machine was temporarily located in a trailer.  It was one of those modular buildings that often are used as class rooms in fast growing school districts.  She warned me to be cautious navigating the ice as I climbed the pressure-treated wood stairs.

She locked my metallic valuables in a file cabinet and explained the procedure to me.  I was surprised to learn the routine would take 30 to 45 minutes.  My previous experience consisted of 10 minute x-rays.  Good thing I’d dressed comfortably.  Expecting belts and buckles to be an issue with the big magnet, I sported Under Armour fleece lounge wear.  I was both warm and comfy and declined her offer for a blanket.

Recumbent in a supine position, I pierced the alluring grotto feet first.  Soon the machine emitted a noise not unlike a tennis shoe bouncing around inside a clothes dryer, but more synchronous.  A minute or two later I was done.  Apparently I fell asleep to the rhythmic drumming as my iPhone confirmed I’d been in there at least 20 minutes.  So I’m unable to report much more on the details of being MRI’d, but can tell you it’s very cozy.  The pic above is the image of my symphysis pubis after redacting some of the personally identifiable information from the upper right.  Supposedly some Radiologist whom I never met – likely working out of a cubicle in Bangalore – will provide the results to my Orthopedist in about 3 days.  Stay tuned.