I continued my hiking with Rob on the Continental Divide Trail (CDT) near Steamboat Springs this past weekend.  We’ve been hiking northbound generally but the most efficient car shuffle for this outing suggested a southbound route.  We hiked two sections southbound, first 15 miles from Buffalo Pass to Rabbit Ears Pass on Saturday, then 24 miles from the Three Island Lake Trailhead to Buffalo Pass on Sunday.  For Rob, this leaves the section of trail between Grand Lake and Rabbit Ears, and the 50 miles of trail south of Wyoming, for him to complete all the CDT within Colorado.  He also he completed the northern half of New Mexico. 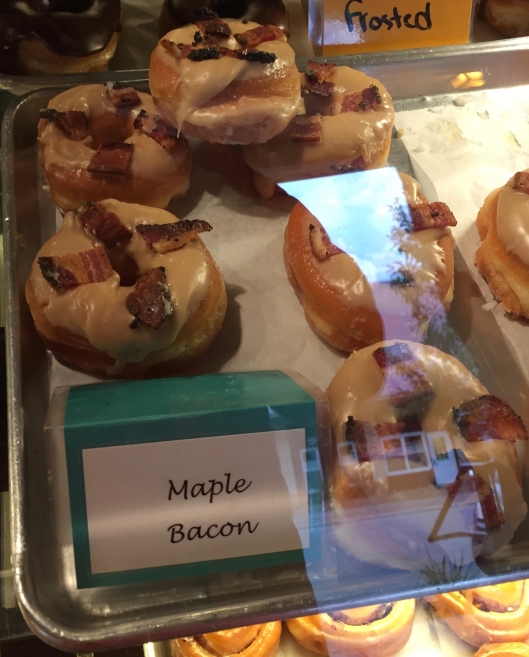 Saturday’s adventure began at the Moose Watch Cafe for a breakfast burrito and a few donuts.  I ate one of these maple bacon delights, along with something cream filled.

Early in our hike, as we stopped to adjust our gear, this cow and her calf sprinted up behind us.  They stopped and acted a bit startled after spotting us, before continuing their trot deep into the woods.  Moose are really just super large deer.  They’re somewhat spectacular to see up close in the wild.

This section of trail consisted mostly of alpine meadows and lakes.  Everything, even the tundra above tree line on day two, was lush and green, like these high mountain daisies I’m standing in here.

I’m not totally certain what these flowers are.  My best guess is Parry Primrose.  Could be fireweed.

Saturday’s hike ended at Rabbit Ears Pass, just south of Steamboat Springs.  We saw a decent number of other hikers, and even more mountain bikers.  Even a few fishermen headed up to those alpine lakes. 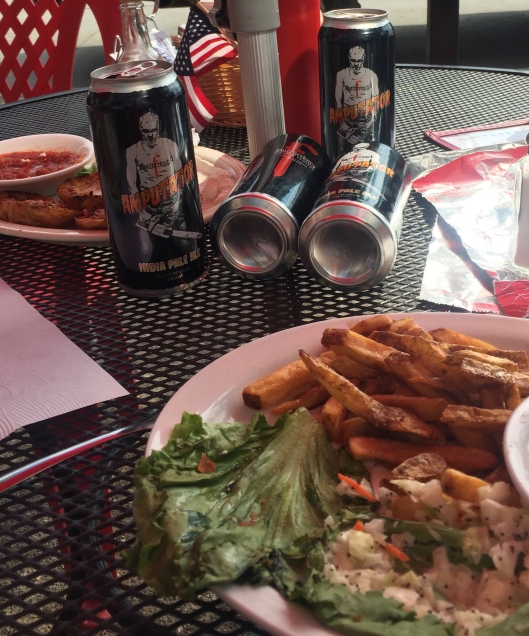 To heal our sore muscles after the 15 mile trek, we dined in Steamboat and quaffed a few of the local Butcherknife Amputator IPAs.

Despite the very wet ground, we got ourselves a camp fire for the night.

We started out the next day at the Three Island Lake Trailhead, 50 miles south of the Wyoming border.  Sunday’s hike was mostly above treeline, but the ground was still more soggy marsh.

The melt off these snow fields accounted for some of the sogginess, constant afternoon rains for the rest.

The photo above captures what much of the top of the CDT looks like, fields of alpine flora with very little signs of an actual trail.  You just walk between the drop offs.

Other times, you look for the next cairn to guide the path, when the trail is under near permanent slow fields, or like below when there’s not enough foot traffic to carve out a path through the fast-growing grass.

This sign points to a spur trail, Grag’s Trail, that runs behind me.  You can’t make out a discernible trail in the grass, but you can spot the cairn over my shoulder pointing the way.  Our trail in this photo, is the Wyoming trail running horizontal, also without any visible path.

There were so many photo perfect moments on the trail but for the most part, I simply experienced them without taking pictures.  Like when the team of elite mountain pixies came running past us.  Spaced over a 20 second spread, four unbelievably attractive runners ran by us at maybe a 7 minute pace.  Clearly under 8 minutes per mile.  At extreme altitude.  While they were wearing different racing outfits, you could see they were a team by how uniformly they maintained form, like a peloton in bike racing. 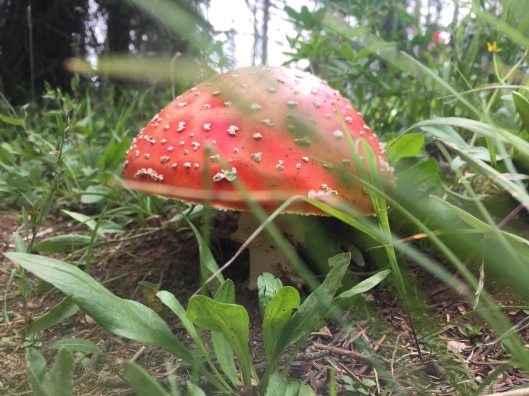 Either Rob and I really were passed by a quad of beautiful elite trail racers, or we took a bite out of this hallucinogenic Fly Agaric mushroom growing alongside the trail and imagined it.  After 8 hours, we completed Sunday’s 24 mile trek, this time entering Buffalo Pass from the north, satiated for that moment, hungry now for the next opportunity.