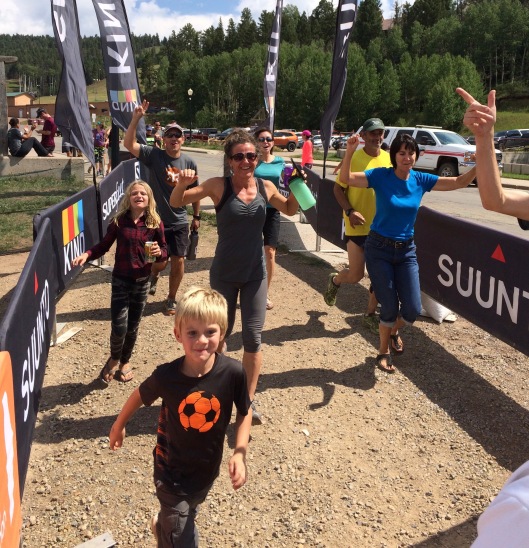 Running last on a twenty-plus hour relay is less than ideal for a number of reasons.  My other two runs were in the dark.  I couldn’t eat lunch.  The sun was directly overhead at noon, nullifying much of the shade the forest trees would have otherwise provided.  But what a kick to run the anchor leg.  Whereas half the team is typically asleep in the tent or quaffing beers back at camp while one runner launches and another finishes, the whole team showed up to send me off.  And, as pictured above, they all joined me for the glorious finish.  I got rockstar treatment.

The totally unexpected benefit though is the pressure to perform.  I consider it a benefit because it works.  I ran my first two loops comfortably.  No big crowds to perform for at 10pm and 6am.  And while I’m in good shape overall, I don’t have quite the speed I had the  previous two years.  Too busy with work this year, and running less miles training with Ellie over the summer.  So I didn’t expect to have a particularly strong run my final loop.

But my 3rd loop was the big one.  Over six miles, 1300 feet of altitude gain up a ski hill, reaching 9800 feet in elevation before crashing back down to the resort.  The other loops didn’t require motivation.  This leg demanded it.  Everyone, Barb especially, pressured me at the start to run a specific time.  “You have to beat 1:13.”  An hour and thirteen minutes.  “You can do 1:12.”  “Sub 1:10!”  I was honestly shooting for 1:20, and would have been happy with anything under 90 minutes.  Their faith in me motivated me to try for a strong run.

My goal running up was to maintain a steady pace and avoid walking as much as possible.  The course was a single track hiking trail on the ascent.  I maintained the perfect pace, never succumbing to oxygen debt and only walking through a handful of stupidly steep switchbacks.  I passed about eight other runners and was never challenged from behind.  My plan was to make it to the top, and then consider racing down if my legs had anything left.

The course on the descent was a mountain bike trail.  Wide banks, non-stop, with an occasional straight section where it was safe to let my legs fly.  I definitely took advantage of the straight trails.  I was more guarded on the curves but committed to them when they looked like more dirt than rocks.  The rocks were deadly.  And some of the banks were difficult to run unless they were run at full speed.  Think of a race car on a banked track.  If you don’t run into them with enough momentum, you fall into the rocky rut.

It wasn’t clear to me if I was running fast enough for the times projected by my mates, I didn’t wear a watch.  I ran out of steam about a half mile before the finish, but the top three miles were so much fun.  I crossed the finish line, with the entire team following me the last few yards, in 1:05.  Sixty-five minutes.  I’ve had a bit of a disappointing racing year, with times slower than previous years.  This made up for that.  The pressure presented to me at the start was worth it. 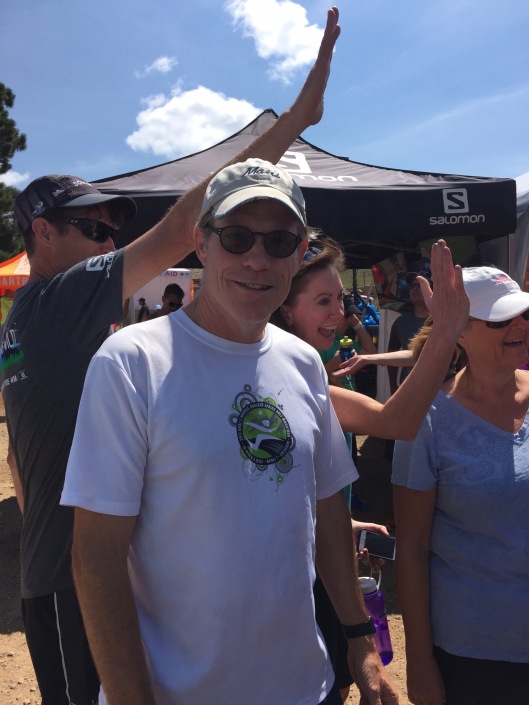