This weekend’s fifty-four mile backpacking hike along the Continental Divide begins at Berthoud Pass at 6am.  The early start required a 3:30am wakeup from our stellar Shadow Mountain Lake beachside camp site in Grand Lake, where we leave one of our cars because that’s where this trek will end. 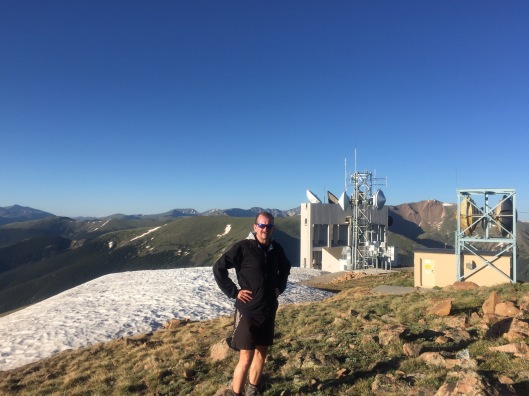 1100 feet of elevation gain later, Rob stands atop Mines Peak, the first of so many peaks that I lose count.  I didn’t capture stats with a Garmin, but traversing the Continental Divide Trail above the headwaters of the Colorado River likely included well over 10,000 feet of vertical on just the first of our three days.

My legs are so spent by the end of day one, I’m near tears when Rob tells me we have to scale yet another giant boulder field to avoid having to glacade down a scary snow cornice that covers the trail over Devil’s Thumb Pass.  We need to get around this snow to camp on the east side of the pass. 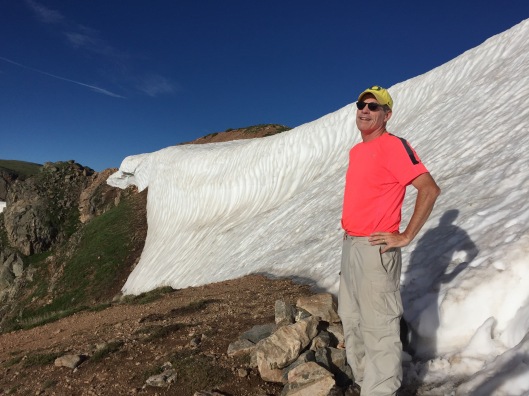 We end day one having trekked twenty miles in thirteen hours.  Not a strong pace but considering 30 pound backpacks and terrain, we’re impressed with ourselves.  Thousand foot climbs followed immediately by thousand foot descents.  Boulder field after scree field after boulder field.  For this final scramble, I use my bare hands to steady myself against the cold, abrasive granite on each step.  I no longer trust my fatigued legs to land without buckling. 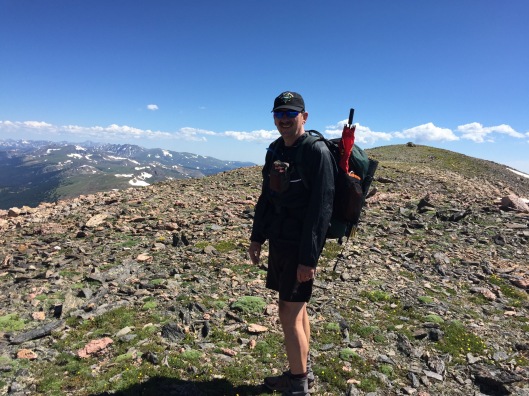 This photo of Rob above shows the typical tundra we walk across from Mines Peak to Devil’s Thumb Pass.  No trail for much of it, just a route for us to keep between the edges of East and West.  The Cairn at the top of this hill leads the way.

The tundra isn’t all moonscape, alpine flowers are lush from this season’s strong snowfall.  I’ve never seen so many alpine daisies.

Camping over the pass near Devil’s Thumb Lake offers us not just water to resupply, but the softest high mountain meadow grass to pitch our tents.  I go to sleep fearful I won’t wake with the strength needed to climb back up that pass to continue on the trail.  I credit the meadow with my recovery.  We wake to see Elk streaming across the mountainsides, crossing fields of melting snow.  I climb back up that 1000 foot pile of rocks, and for the most part, the rest of the hike is downhill.

We meet Squeaks as we descend the High Lonesome Trail from Devil’s Thumb.  She looks to be about 65 years old.  She’s a south-bound (SoBo) through-hiker backpacking from the Wyoming border to New Mexico.  We’ve met other NoBo through-hikers, Charge, and later Cloud Buster.  She tells us about the rough blow-down we’ll face on Knights Ridge Trail.  Blow down are dead trees, some Aspen but mostly Lodgepole Pine, that fall from strong winds and block the trail.  Squeaks also tells us about the three or four family members who have joined her for sections of her hike.  I figure her pack weighs forty pounds.  I mean, look at it.  No idea how she can do this. 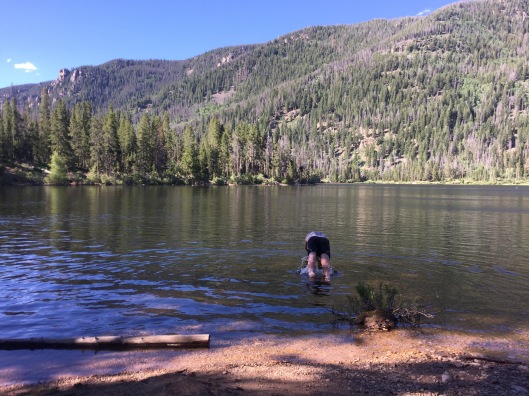 Day two takes us below tree line, where we remain the rest of our hike.  The downhill direction and the oxygen that comes with each downward step help us to complete over twenty miles in twelve hours.  Cooling off at Monarch Lake helped as well. 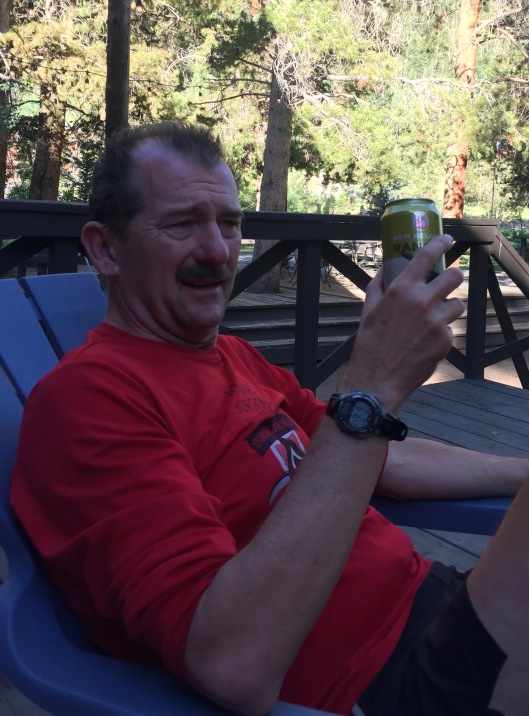 Rob considers renting a teepee for the night, but I convince him there’s yet more hiking before night fall. 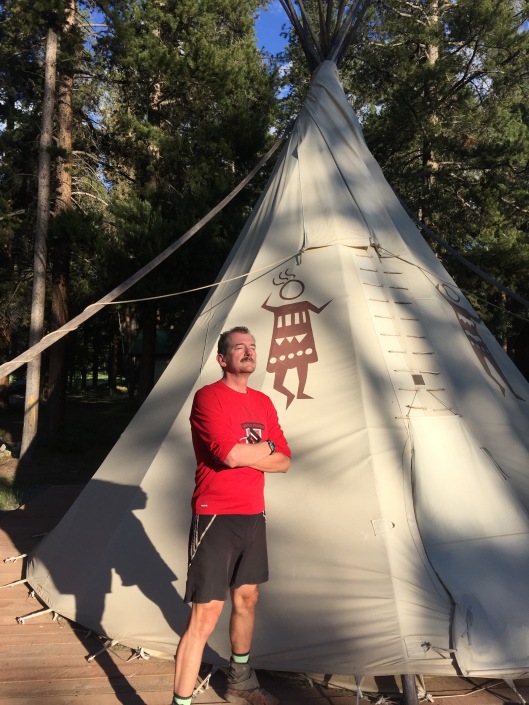 We end the night at the southern tip of Lake Grandby, on a sandy beach.  This is the view from my tent. 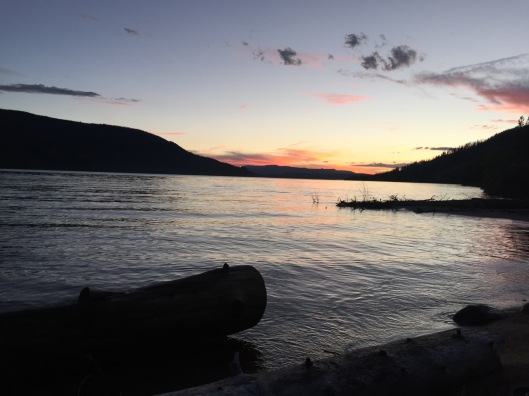 We start out day three earlier than the others, at 5:30, and hike the final stretch alongside Lake Grandby, the Colorado River, and Shadow Mountain Lake.  Much of this is down near the water, some miles are up in high mountain meadows.  On our first climb, we watch a moose take a bath in a marshy pond.  He shakes the water off like a dog, sending shock waves across the meadow from the force of his hooves.  The prettiest flowers in these meadows above the Colorado River are these Columbine.

The headwaters to the Colorado River are dammed up to form a sizable lake, although the northern end flows like a river.  I refill my LifeStraw water bottle, given to me last Christmas by my sister-in-law Susan, at a point where we need to cross a creek streaming into the river.  This water bottle filters untreated water so that it is safe to drink.  Worked awesome for me.  At another creek crossing, either the water is too high or the bridge is washed away, so we cross over the top of a beaver dam.  One of our more dicey creek crossings. 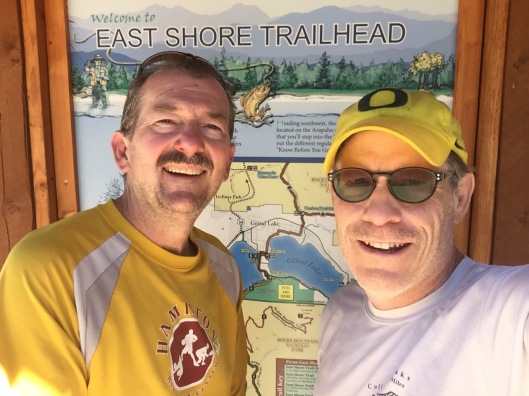 We complete the twelve remaining miles on day three at the East Shore Trailhead after six hours.  A total of 54 miles, 20 above tree line, and 31 hours spent on the trail.  We celebrate this truly epic hike at the Peak Brewpub in Winter Park.