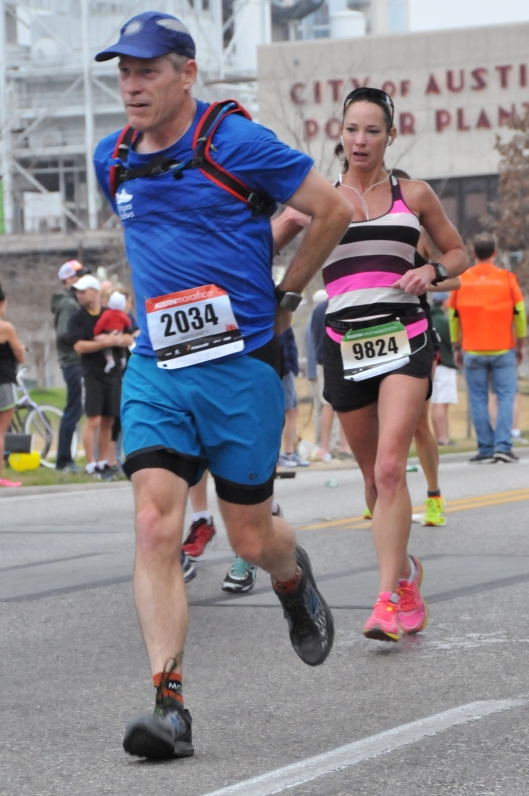 Forty-three year old Christi Moore took 14th in her age division of the Austin Half Marathon with a 1:43:02.  A 7:52 mile pace.  117th out of 5130 women.  I mention this because that’s her running behind me in this photo. We’re running together here at the seven mile point in front of the old Austin Power Plant.  It gets better.  Six miles later, we both complete 13.1 miles within a few seconds of each other. I ran my first half in 1:42:49.  The course splits after 10.5 miles between the full and the half.  We both continued on the same pace for 2.6 more miles.  In case you’re wondering, I’m pulling a gel out of my pocket in this picture.  Mobile eating is more difficult than you’d think.  Enlarge the pic by clicking on it and tell me that Christi isn’t checking out my ass.  If she PR’d, I’m taking some credit. 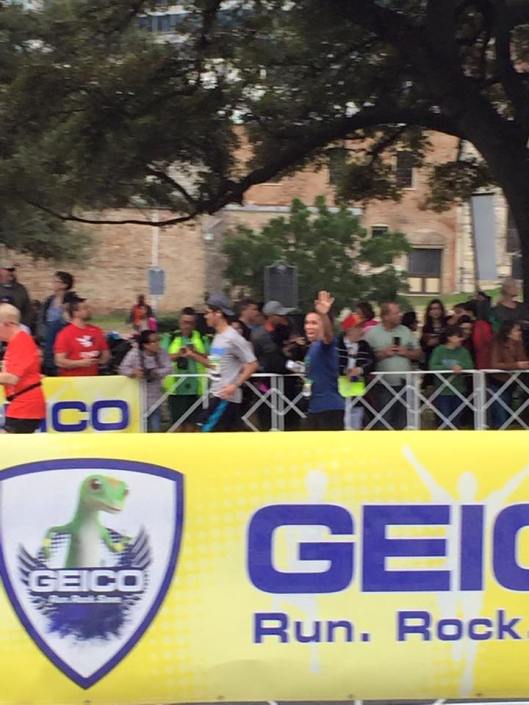 This second photo captures thrity-one year old Rebecca De La Rosa rounding the final turn in the Half.  Rebecca likes to tell the story about how when the kids were told to run a mile in high school, she’d always walk it.  She’s been running the last couple of years with my niece Christi.  A different Christi than the one chasing my tail in that photo.  Since they started running Tough Mudders together, Rebecca has lost 70 pounds.  This was her second half marathon.  Rebecca PR’d in 2:10.

These are just two of the impressive women who ran the 2015 Austin Half Marathon.  The 3rd place woman finisher in the marathon has been in the news all week for her brave crawl to the finish line.  Seriously, Hyvon Ngetitch literally crawled the entire final sprint down Congress Avenue to the finish.  The women pwned Austin last Sunday.  Some tough Texans.