The Cottonwood Pass segment of trail had me more excited than any other during our planning phase because it begins at over 12,000 feet and stays there.  It snakes back and forth between peaks from the east to west to east sides of the Continental Divide.  Of course, with this season’s deep snow pack, it’s questionable how much of the trail will be passable.  Almost immediately, we find ourselves bushwhacking off trail around glacial snow fields.

We plow over the easier snow fields, as Mike demonstrates here.  It’s early morning so we don’t post-hole into soft snow.  We do have to dig our boots into the snow pack though to gain our footing.  This is a slow process.  Fortunately there aren’t too many of these snow fields to navigate.  It’s cloudy with strong winds.  We suspect a storm is moving in so we keep a strong pace.  Atop the first big hill we find a man-made wind break and tuck in behind the rocks for a spell.  You find these rock walls on top of peaks occasionally. 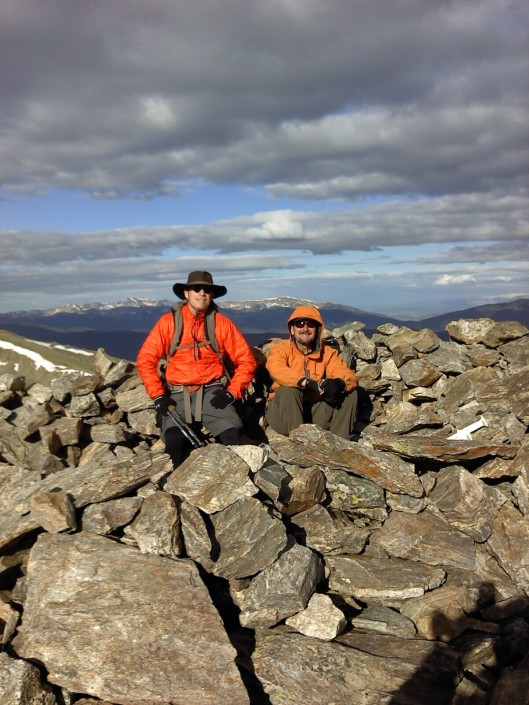 We turn around after an hour or so once the trail becomes too buried under snow.  We rush back at an even faster clip to beat the storm.  Not that it’s raining or lightening, but because the wind is brutal – easily a sustained 25 mph.  It’s almost comical when we pass another hiker, seemingly from some Monty Python skit, with a net chasing alpine butterflies.  Seriously.  Our hike south of Cottonwood Pass was short by our standards, but presented us with some spectacular views.  I intend to return to this trailhead someday.  We’re not done though.  We move on to our next trail – Hancock Lake.

For this destination, we pass through BV again on our way south.  This might actually have been the day we lunch at K’s Diner.  I think I said it was yesterday in my previous blog post.  The days are starting to run together in my memory.  Next time I’ll take notes.  I generally use my photos for a digital record.  Unfortunately I didn’t take as many pics these days.  I did get some of Mike’s pics this week though after he shared them on dropbox.

We scout a decent camping site along the trail up to Hancock Lake and snag it by dropping off our packs.  The lake and Hancock Pass are not that far up the trail.  Mike stops at the lake while I follow La Plata to the base of the pass.  He’s running and I finally give up to rest at the bottom.  La Plata is trying to hit a good point, such as the top of the pass, because he will return later from the south to hike there again from Monarch Pass.  This is part of his goal to complete the entire Continental Divide Trail in sections.

This is our last night camping.  La Plata builds his most admirable flame of the week.  This site isn’t as devoid of dry wood as most.  We recount our experiences from the week.  Climbing a peak.  Water rustling.  Skinny dipping.  Post-holing in snow.  La Plata and I are so incredulous of Mike’s determination to tough out this altitude.  We consider our favorite gear.  I have several; my hiking boots, my puffy jacket, my sleeping pad and my water purifier.  All winners.  At 11,000 feet, the temperature cools down dramatically with the dropping sun so we retire to our tents with the coming darkness.  Tomorrow will be our last hike, to the Alpine Tunnel.