Ran into Chris last night at Antonios.  We strategerized a bit for the Boulder Marathon that’s only two weeks away.  We plan to run together.  Well, start out together anyway.  I’m confident I can hang with him the first half.  My goal though is to hang with Chris through what I call the 3rd quarter.  I break up marathons into 4 quarters – 4 x 10Ks.  A 40K comes up a bit short but this metric works for me.  If I can maintain his pace, under 8 minutes per mile, for 20 miles, I’ll have a shot at qualifying for Boston. 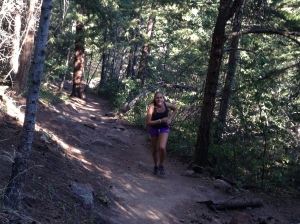 I had the Chochinita Pibil for dinner.  Oh man!  Remember the scene in Once Upon a Time in Mexico where Johnny Depp excuses himself from the table to shoot the cook?  Because it’s the best puerco pibil he’s ever tasted?  This was like that.  Upon closer inspection, I determined what I really liked was the habanero salsa that came on the side.  I probably should have kept it on the side but instead smothered my meal despite being warned by the waitress.  This stuff was hot.  I’ve never had salsa with such intense flavor.  I’m certain, given the right circumstances, Depp would have shot the cook at this dinner over the habanero salsa.

This pibil-fired dinner fueled today’s 9 mile run on Mesa Trail with my Naked relay team.  We run the Flaming Foliage Relay next weekend and this was a planning session of sorts.  I call them Naked for short – our relay team name is Naked and You’re Afraid.  This is a play on words to the Discovery Channel survivalist show, Naked and Afraid.  If you look for it, I think it’s already been cancelled.  Great show though.  Like Serenity for the space western TV show Firefly, I suspect a movie is in the making.  Look for our Twitter hashtag Friday and Saturday, #nakedFFR.  Or follow one of my Twitter handles @edmahoney1805 and @secintel.  Or follow Steve Wolfe @sgwolfe.  His tweets tend to be more clever than mine.

All of us except Brian and Kelly were able to run 9 miles on the Mesa Trail this morning.  That’s Kristina in the top pic.  She tore up the hills today.  Good sign because she is slated for a 4.2 mile climb up Guanella Pass, and with less than two hours rest after her first leg.  Kristina is pulling a double for Van1 in our first set of runs and will finish with 1600 feet net gain in elevation.  That’s Allison in the second pic.  She passed me this morning while running up one of the tougher hills.  Another good sign because she has the hardest leg running up Guanella Pass at 6.1 miles.  Her net elevation gain for the entire relay will be 2000 feet. 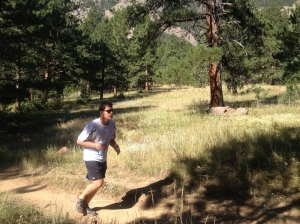 Jen is in the third pic with the pink running skirt.  Clicking on the photos will enlarge them to their full resolution.  Jen starts with a 10K trail run and will complete 19 miles by the end of the relay.  That’s Keith after Jen in the blue shirt.  Keith has to climb the final two miles over Guanella Pass and then descend a brutal 7 miles down the other side.  Assuming his legs recover, he’ll run a total 22 miles.  Steve is in this pic in a white shirt.  He’s our influential team captain with persuasive recruiting powers.  Steve will run a very hard 10K and hand the baton off to me on the Colorado Trail before I run over Georgia Pass.  Steve will also be our final runner in Buena Vista, having run 23 miles in all.

As anyone would do after running Mesa Trail, we brunched at the Chautauqua Dining Hall.  We used this time to plan the number of coolers, capture beer requests and discuss all the other important details.  Jen is renting the two vans – she’ll pick those up Thursday so we can load them that night.  We’ll leave for Idaho Springs at 4:30am Friday.  I run the first leg at 6:20am.  Thirty hours later we’ll be partying at some cabins Steve arranged in BV.