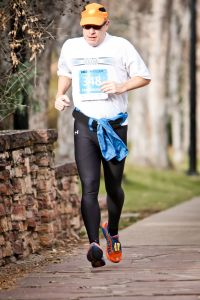 About time Colorado cools off to winter status.  Although the only reason it was cold enough in this pic to wear tights for this year’s Colder Bolder 5K was that it was early morning.  I love it when I get a race pic with both feet in the air.  It’s right up there with getting a pic that doesn’t show a double chin.  Click on the pic to enlarge it if you need to in order to see both feet are indeed off the ground.  But then you might also notice the double chin.  I downloaded five race pics – all capture a double chin.  Still, race pics with both feet in the air is like flying in your dreams.  Like unicorns in North Korea.  They are magical.

Those massive California rains turned into snow over Colorado and this week felt like winter.  At least at the start of the week it did; we’re back above freezing now.  I used the cold as an excuse not to run.  I actually don’t mind the cold, especially when the sun is shining, but I balk when the cold is combined with strong wind.  I used being busy at work as an excuse this week too.  Emphasis on the word excuse since I think I just didn’t feel like running this week.  I don’t think I’m burned out.  Maybe I just shifted my focus to preparing for the holidays.  Those Christmas cards don’t sign and mail themselves.  The holidays present additional tasks.  Apparently I sacrificed my running.  That’s okay.  No upcoming races to condition for, and friends and family in Texas will be disappointed if I don’t show up with my traditional paunch.  To wit, I’ve been eating more Christmas cookies than Santa this week.  Nothing goes better with coffee than Danish butter cookies – except maybe Gadget Girl’s coffee cake but that’s hard to say since she only talks about it.  I’ve yet to have any. 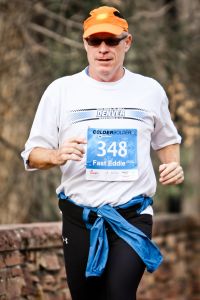 With Fridays off this month though, I was able to get in a nice run today.  I returned to Heil Valley Ranch – the southern trail head near the Greenbriar restaurant – to run the Wapiti Trail.  I didn’t get out to the trail head until noonish.  Hearing the news of the Sandy Hook shooting sort of slowed me down for the day.  I spent the morning watching CNBC as I finished up the Christmas cards.

I wasn’t surprised to discover no snow or ice on the trail.  I’d be fine either way but what I really appreciated was that there was absolutely zero wind.  I wore a light fleece shell over two t-shirts and found myself quickly rolling up the sleeves.  And shortly after I began to carry my fleece cap in my hand. I brought gloves but left them in the car.  With the temperature around 50° or so, this was ideal running weather.  Almost unbelievable to have a day at this time of year with zero wind.

I probably ran close to ten miles – at least eight.  I didn’t time it but the Wapiti Trail adds up to five miles up and down, plus I ran the Turkey Trail Loop and a mile on Picture Rock.  Funny thing about not running for seven days.  My body began to hurt after a few days off.  My knees and especially my feet and ankles were just as weak and sore from not running as from running.  Some sort of reverse growing pain process kicks in after a few days. As my muscle tension relaxed, my ankles became as weak as when I increase my distance.  I have to be very deliberate when I get out of bed and hold the hand rail as I descend the stairs in the morning.  There’s a bit of pain associated with this but mostly just weakness.  Stability comes after a few steps.  It’s an interesting thought that it can hurt as much to fall out of shape as to gain the initial conditioning.  Bodies in motion want to stay in motion.  I ran slow to recognize my legs lost some stamina, but my breathing was fine.  You can’t lose a year’s worth of aerobic capacity in one lax week. 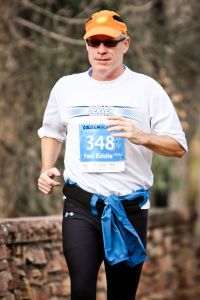 Fairly relaxing day overall.  I didn’t have any stressful work issues arise over email so it really was a vacation day.  Fantastic run really but this school shooting has me at a loss for words right now.  We have a Christmas party to go to later tonight.  Hoping that’s a pick-me-up.  I don’t normally use this blog as a soapbox but will go on record to share my belief in the need for gun control.  I’m not a gun owner but respect the rights of sportsmen and believe we need to support the U.S. Constitution.  But be pragmatic.  Guns don’t kill people but they are for killing.  Semi-automatic weapons aid killing to an unacceptable degree in a society of 300 million citizens.  I support gun control.