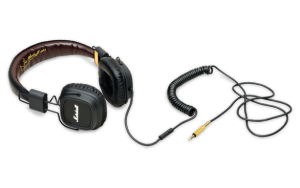 I bought these Marshall iPhone headphones knowing I’ll be using my iPhone for conference calls all day long for the next few weeks rather than a land line.  And after first using them for music, I was a happy boy with their quality.  I just knew I would not want a bluetooth ear piece or ear buds stuck in my ear all day.  I’ll wear ear buds running – although rarely these days – but I’m generally dissatisfied with that experience.  I like the big ole comfy headset.

Today was their first run in production and turns out comfort wasn’t the issue – echo was.  I never heard echo myself but I had people complain on several conference calls.  I could go on mute and solve the problem although I wasn’t sure it was me.  People would hang up and redial to try to solve the problem – apparently it was pretty annoying.  Then I called Karen later in the afternoon and discovered it was me.  Funny thing is she didn’t hear it from her iPhone, but her signal was weak and she called me back from a land line.  Then she heard it confirming I was the culprit.  I unplugged my headset and the echo went away.  But I was devastated.  I really liked my Marshall headphones.

So what does a guy like me do next?  I googled the heck out the situation.  Turns out it’s not the headphones per se, but my iPhone 4s.  A good number of iPhone 4s owners are reporting this problem.  And here’s where it gets weird.  You can mitigate the echo by cycling through the speaker phone.  Your call participants hear an echo, hit your speaker button on and off.  Unfortunately this might only fix the echo temporarily.  The good news is it appears Apple will replace the iPhone.  There’s an Apple Store at the Domain off MoPac.  I’ll be setting up an appointment for this weekend.

3 thoughts on “We Are Marshall”