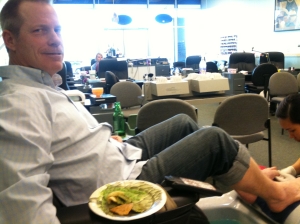 This is not what you think.  I mean it’s not really an awards ceremony.  Nobody in my inner runner’s circle won any awards.  But we awarded ourselves tonight with a foot stompin’ good time.  To reward ourselves for our 13.1 mile efforts, we pampered ourselves with pedicures.

Four beers deep into the evening, I discovered my inner chick runner and enjoyed the massage, wax, hot wraps, buffing, chips, dip, olives and more beer.  I neglected to mention in my earlier blog posts on the Moab Half that the vast majority of Team Prospect were women.  Keith and Steve were the only two other men, but they weren’t man enough for this celebration.  With that said, can you tell which feet are man and which are woman in this pic? 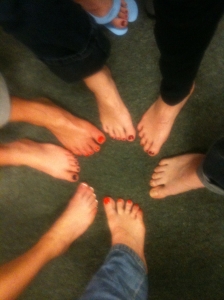 Seriously, I not only enjoyed this – I plan to make a habit out of it.  Why not?  I beat the hell out of my feet running.  There are times Karen wants to put a bag over my feet.  My feet are a vessel and I should take care of them.  Before this, I didn’t understand what taking care of them meant.  Now that I know, I’d be reckless not to get pedicures.  You say what you want.  Or think what you want, you feckless voyeurs.  You got something to say, leave a comment.  I could have used this back in the day when I was a young athlete.  Of course, I didn’t exactly have the coin back then, but I imagine San Marcos had some cheap back alley spas that I could have afforded.  I’ll be joining Karen as a regular going forward.  That’s my foot on the right without any polish in the pic.