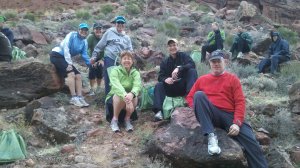 The best thing about the half in Moab wasn’t the spectacular scenery, it was spending the weekend with friends.  What are the odds I could have so many friends fit enough to enjoy such a demanding sport with me?  If this weren’t Boulder County, I’d say pretty low.  In this pic is Eve, Suzy, Coach Jabe, Katherine, Keith and me.

But I’ll be running by myself this weekend in the Boulder Half Marathon.  Sort of hard to get excited about that.  I am thinking about it as simply a workout, and that’s fine; but man – what a difference!

I checked out the course online today at the Boulder Res.  I’ve run those backroads before.  Good God, I must be spoiled but talk about boring.  In fact it’s double boring because it’s an out-an-back route.  6.5 miles north on gravel roads, turn around, and return back to the Res on the exact same 6.5 miles.  Now that I think about it, the Garden of the Gods 10 Miler was that way too.  But that was different.  It included a half mile loop at the turn-around, and the hills were so intense that they seemed new the second time.

So what will it be like running alone this weekend?  Not much different really.  I wouldn’t even be thinking about it if last weekend weren’t such an extroversion.  Before Moab, I ran the Austin and Denver Marathons completely by myself.  So this isn’t exactly unusual for me.  But then I ran the IPR with my buddy A Low Hawk before that.  Running with friends turns a workout into an event.

Can’t do an event every weekend though.  I think running an organized run as my workout is smart.  I typically run by myself and I suspect running with the crowd will push me to run a little harder.  Not as hard as Moab where I was under some pressure to beat Keith.  Poor Keith started out too fast, sort of like me in Austin, and hit a bit of a wall at 11 miles – when the course flipped its slope to an incline.  I plan to run as slow as I would in a workout.  I’ll certainly start out nice and slow, although I expect the event factor to keep my pace strong.  I ran an 8:12 pace in Moab.  I predict an 8:30 pace this Sunday.  Forecasting is hard though because the elevation is dramatically different from Moab.  Boulder rises 300 feet the first half, and then gives back that altitude on the return.  Just another reason to start out slow and hope I loosen up.  That’s the game plan.