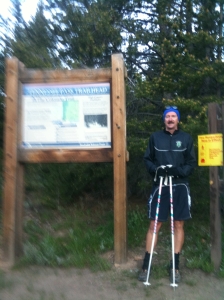 You spend another night as the old man gazing up at a spectacular starry sky.  And Tumbleweed again rises well before daylight to make coffee.  You pack up your gear but leave the tent until more light filters through the trees.  You misplaced your headlamp among your gear and will need more light to find all the stakes.  The headlamp was a Christmas gift from your brother-in-law.  How did Chad know you’d be camping this summer?  The headlamp is awesome when it’s on your head.

Gear you now agree with everyone else that should be updated is your camera.  Using the iPhone as your camera, while convenient, isn’t cutting it for blog-worthy pictures.  This pic of Tumbleweed starting off from the Tennessee Pass Trail Head serves as a case in point.  The panoramic views of the CT deserve a better camera.  You up it on your list of priorities.

It’s interesting how you share gear with Tumbleweed.  He of course has everything one needs for camping and hiking.  He’s through-hiked both the Pacific Crest Trail PCT and Appalachian Trail AT – alone.  Once you discover how valuable some of his gear is, you pay a visit to REI.  Your trekking poles are one such purchase.  You’ll be taking advantage of their utility long after the snow is gone.  A more recent example is Starbucks VIA Ready Brew.  Most people will agree that instant coffee sucks.  Ironically, it taste pretty good when you’re camping.  Something about the hint of civilized living in the morning after sleeping on a rock.  Well this stuff really kicks it up a notch.  It’s actually worth it from convenience alone based on its single cup packaging, but the flavor will blow you away.  You’ll find it at your grocer past the coffee beans just before the tea.  Fortunately the snow is melting to the point you don’t expect to be blogging about the use of an ice axe.

You expect today’s hike to be relatively easy.  It appears fairly flat on the elevation chart, albeit entirely over 10,000 feet.  And you again leave behind your snowshoes.  So you imagine you could run a significant portion of segment 9, but yesterday’s 25 miles deserve a recovery hike.  You begin with a gentle walking pace as demonstrated by Tumbleweed below.

The trail remains mostly shaded from the sun but it’s warmer than yesterday, and yesterday was hot.  Your neck is sunburned and you feel it today.  You apply liberal amounts of sunscreen to try making up for yesterday’s burning.  Less than 2 miles in you encounter a couple of through hikers.  You chat with Dusty.  He’s young, athletic, and you figure he’ll run past you before this hike is half over.  These guys aren’t packing snowshoes and simply look fast.  You and Tumbleweed exchange guesses on how long it will take for them to catch up.  A little further, just over 2.5 miles, you cross Wurtz Ditch Road and count nearly a dozen cars.  Wow, this really is 4th of July weekend.  But where are all the people?  You find them a couple of hundred feet later in a massive tent city.  Five tents are pitched literally on top of the trail to where you have to be careful not to trip over their stakes.  The campers appear to be sleeping and you’re greeted by some little yapping vermin that might possibly be a dog.  It nips your calf twice and chases after you along the trail, waking up the entire forest with its wannabe dog barking.  Several of the campers yell at it to shut up but no one bothers to wake up and retrieve the mini beast.  So it doesn’t bother you that your early hike-by disturbed the late morning sleep of these trail ass-wipes.

You enter the Holy Cross Wilderness Area before 7 miles, and exactly at 7 miles, you encounter snow.  Like yesterday, it’s hard and easily supports your weight.  What makes it difficult is that it’s combined with fairly steep terrain.  This slows down your pace for the next two miles but the snow mostly fades once you return below 11,000 feet at mile 12.  The last mile or two is sharply downhill but your legs have enough strength to handle them with confidence.  Your feet are tender though and you recall the pedicure you had a few months ago with the girls from Team Prospect.  Some foot pampering will be in order after this weekend.

Mercifully, today’s hike is mostly shaded.  The snow has given way to a woods so lush and green that at times you imagine it a rain forest.  When the trail itself isn’t a stream, you are hopping over hundreds of water jumps where the snow melt is gathering to eventually form into mighty rivers.  From much of the hike you can view the head waters of the Arkansas River.  At just under 14 miles, this hike is short but very pleasant with the shade and views.  You recommend this hike to anyone looking for a decent workout.  You finish it at Timberline Lake Trail Head near Turquoise Lake one minute short of six hours, and before Dusty.  You wonder if Dusty survived the yapping dog in Tent City.  You are less exhausted than the day before, but tired from the cumulative effect of 39 miles in two days.  Eating real food is all you can think about and you determine to stop in Leadville to eat before picking up the second car still back at Tennessee Pass. 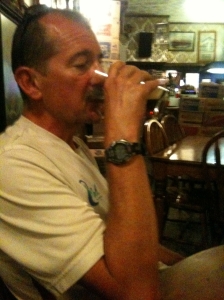 Since turning left onto Leadville’s main street, Harrison Avenue, didn’t present you with the best choices yesterday, this time you turn right.  It’s hard to ignore the legendary Silver Dollar Saloon, so you don’t.  The first thing you notice upon entering is the extremely dark lighting.  You hope the cooks can see the food well enough to cook it.  Apparently they can’t however as you eat one of the worst burgers in the history of beef – with yet more bottled beer.  You guess the cook hasn’t cleaned his grill since Doc Holliday shot dead his last man in this very saloon.  Bummer.  You’re expectations have been set too high from the discovery of some outstanding small town Colorado eateries from hikes past.  But you won’t give up on Leadville just yet.  You’ll be back to hike 14,421 foot Mount Massive in a couple of weeks.  Perhaps you’ll review Quincys or Callaways.