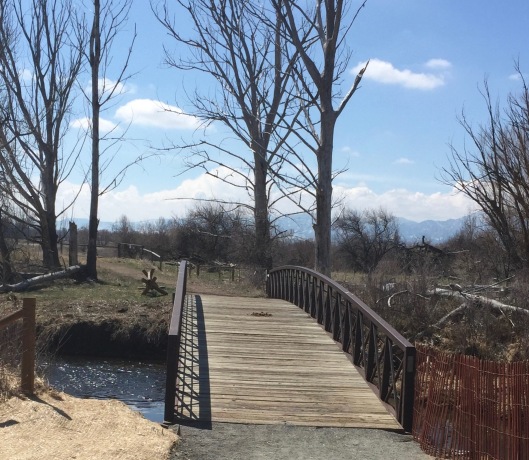 This is a photo of today’s foot bridge, taken earlier this spring.  No one was standing on it then, like today.  And yes, those are road apples in the middle of the bridge.

The East Boulder Trail had some runners on it today.  A young girl passed by me early on with elite form.  Then another guy, weight-lifter for sure, shirtless of course.  On my return, five and a half miles into an eight miler, I was crossing this bridge with some momentum.  Unlike in this photo, it was nearly crowded with hikers and runners.  And as I reached the apex, as if in a zombie movie, a lady jumped out at me, her hands reaching for my throat.

Too late to perform the move well, I understood the outstretched arms to be an attempt for dual fist bumps.  I figured I must know this person and bumped her fists, if that’s in fact what we were doing.  But I made no attempt to slow down.  I continued running past her.  I needed that momentum to take me into the next hill.

Two steps past Jen, I recognized her and stopped.  I turned around and saw that the guy with her was Bob.  They were training for a literary hike through the Scottish Highlands. One stop is on the path of Diana Galbadon, another on the passage to J.K. Rowling.

The fit, shirtless runner crossed the bridge on his return.  Jen did more than notice, she commented.  Even I was a bit envious of the guy.  We all started back on our runs, in opposite directions.  Jen and Bob headed for Valmont Road.  I headed for the hills.