The best hikes begin with camping.  I’m pictured here at dusk beside my one-man, Big Agnes tent, perched about a hundred yards from the upper parking lot on Guanella Pass. Signs posted in the parking lot say “no camping”, but the guidelines aren’t clear.  A reasonable person would believe that to mean within fifty yards.  We weren’t alone.

It’s been about a year since I’ve been camping and I will tell you that I enjoy it as much as the next day’s hike.  It’s mostly the stars that I find so special.  Absent the ambient city lights of the Denver metro, the night sky is absolutely stunning.  The first stars to become visible are actually planets, first Venus, the evening star, followed closely by Jupiter and then Mars appears as a red twinkle.  I have thoughts watching their light emerge from the darkness of early man viewing the same night horizon thirty thousand years earlier and maybe learning to count to three.  Soon after the arrival of Mars, too many stars flood the night sky to count. 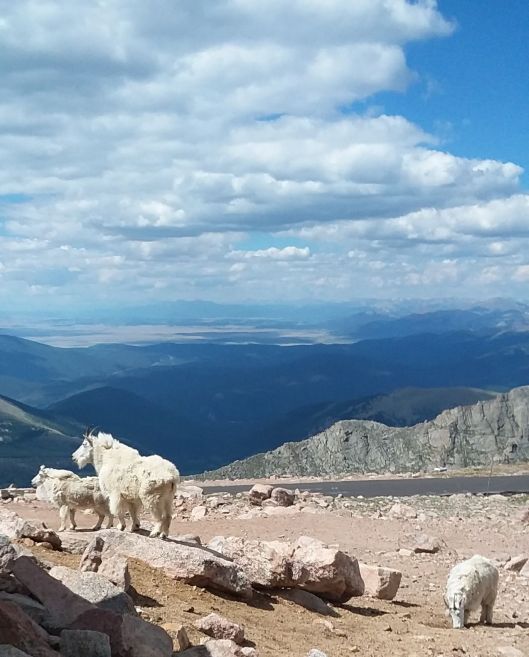 We woke at 4:30 and hit the trail an hour later, after packing up and enjoying trailhead coffee.  The upper parking lot was filling up and the lower parking lot was completely full, with fifty or more cars parked along the road.  If you’ve hiked Mount Beirstadt, then you know how crowded that trail is.  With the pass sitting above tree line at 11,669 feet, Mt. Bierstadt is one of the most attainable 14ers in Colorado.  But Rob and I didn’t take the trail up to Bierstadt.

Still in the willows, we turned left at the creek crossing.  There’s a faint, unmarked trail that follows the banks, until it disappears in the willows.  The trail existed on some map Rob studied before our hike.  A map he left at home.  Having a map would seem wise when entering the forest and mountains of Colorado, but we knew where we were and about where we wanted to go.  We shuffle parked our other car at Echo Lake, on the other side of the mountains that lie in front of us, roughly thirteen miles easterly from Guanella Pass.

I can tell you the trail didn’t exist on the map I studied before hand.  It’s safe to say, there is no trail, so we bushwhacked our way through the cold, wet mud and willows in a pointed direction to the saddle that sits north of Mount Bierstadt.  Trails did emerge at times, animal trails no doubt.  Rob’s general tactic when having lost the trail is to proceed upwardly toward higher ground.  There was no debate, up was where we wanted to go.

We encountered climbers at the top of the saddle.  Rather than presenting a trail down the far side, turned out the other side of the saddle is what climbers call the black wall, a sheer cliff with a thousand foot drop.  Our trail was another quarter mile uphill and to the right.  It’s actually a loop and we continued up Mount Spalding, and eventually to Mount Evans itself.  It’s not an easy trail, at times more of merely a route marked by cairns.  The climb was exhausting. 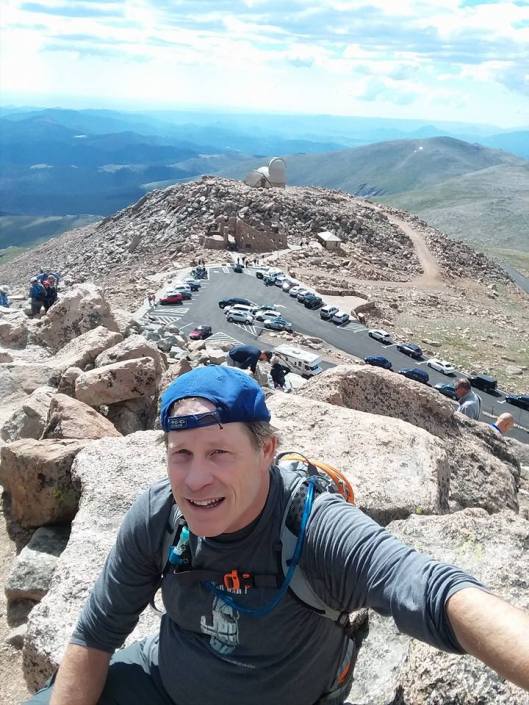 Of course, you don’t have to hike for miles to reach Mount Evans, there’s a paved road that allows visitors to park a hundred or so feet below the massive pile of rocks that form the peak.  As far as we know, we were the only hikers atop Mount Evans who arrived via the unmarked trail from the Guanella Pass direction.  This is a rare mountaintop that is reachable by paved road.  I very much recommend it.  Visitors were taking pictures of mountain goats as they stood in line for the restrooms by the observatory.  Where else would you find that experience?

Our descent was just as brutal as the climb up.  The first thousand foot drop from the peak contained switchbacks as tight as a staircase, and the steepness continued for several thousand more feet, hammering my thighs and quads to where I still can’t descend the stairs in my house today without holding onto the railing.  We reached the Echo Lake Trailhead after thirteen miles and nine hours.  Another epic hike in the books.  Can’t wait to get back out there.