I drove to Kanab, Utah to experience some of this country’s most spectacular trail runs.  And to maybe reignite my passion for running.  Sunrises like this one over the Grande Canyon were enough to make me become a morning runner.

The first morning was less certain.  Crawling out of my tent at 4:30am into cold, monsoon rain was not an easy thing to do.  But I came here seeking my tribe, to see if I might once again belong with the men and women who are actually in shape to run these trails.  I gathered my gear and confidence and headed to the start of my first race in nearly a year.

Bryce Canyon began as a sodden run in mud, with rain clouds obscuring the sunrise until half way into the course.  Fortunately the ground was more firm in the second half, spared from most of the rain, because the trail here was more exposed on side hills of dirt and trying to run it would have been dangerous.

Runners from past events said it was also good they reversed the course, as the vertical was easier to handle in this direction.  As incredibly scenic as this course was, winding its way through hundreds of hoodoos, the final mile ran through a dry wash and required crawling under this mud-packed bridge ten meters before the finish line.  The finish was almost ironic in how ugly it was relative to the panoramic run.

Day two was Zion and the weather was gorgeous.  I don’t think any of the runs warmed up over 60° and this particular course was fast for those primed for racing.  We ran a thirteen mile loop on the Gooseberry Mesa that wound its way through waves of slick rock.  Not ideal in that running on rock isn’t too much different than running on cement, but it was such a visually unique surface, like running on the moon.  Imagine running a half marathon through a skateboard park.

While the elevation of this trail was fairly flat, the ups and downs over the rocks were exhausting.  I’ve developed a sore knee over the last couple of weeks training and its weakness stole some of my confidence in my footfalls, otherwise I believe I might have run faster on this day.  It was my fastest pace of the three runs.

Day three was thirteen miles on top of the Grande Canyon, just south of Lake Mead alongside the prominent Horseshoe Bend.  This run followed a sandy jeep road the first quarter mile directly to the ledge over the Colorado River.  The course then turned to run alongside the river for roughly three miles on rock very similar to the previous day’s slick rock, grippy but red and more crumbly.

There was never really a trail, we followed pink ribbons tied to shrubs that led us through the desert landscape.  As the crowd thinned out, it took all my focus to spot the next ribbon.  No day dreaming on this run.  Even when I had runners to follow, I couldn’t trust them.  Runners had a tendency to drift well right of the ribbons.  Too far right and they’d be on top of the cliffs again.

The middle six miles were through deep sand that sucked the life out of my legs, along with most of my momentum.  I rolled my ankle on the return as the course returned  to the rocks.  I took that as a hint that my legs were too fatigued to safely run the rocks so I walked much of the final three miles.  I also had a rock break on me when I was making a two foot jump.  Other runners around me applauded my graceful landing, asking me if I was an avid skier.  When I replied that I snowboarded rather than skied, I got a few boos.  Runners are fickle. 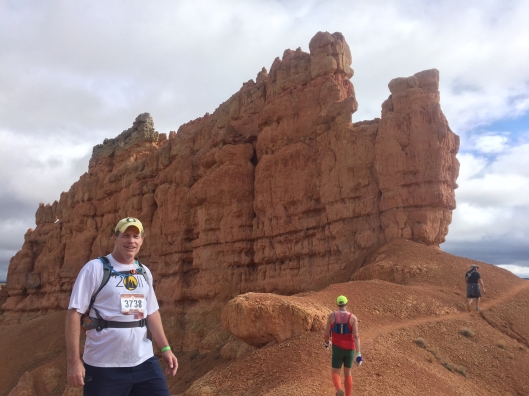 Not sure I can explain this but I had the sense this outing was like a little Burning Man experience.  Maybe it was all the mud and rain that gave it a Woodstock feel.  Or the many Native American talks and dances I sat through.  Or simply the desert of southern Utah.

I was alone for this three day event, sleeping in a one-man tent that began to feel like a coffin near the end.  I finished a Dan Brown thriller and mostly kept to myself.  Including the drive, I had time for reflection.  It’s funny how thoughts come to you differently when your mind is free from the everyday routine.  Even though I brought my laptop, I never booted it up.  I turned off all notifications on my iPhone.  I believe I may have successfully weaned myself off daily news.

I gained an understanding of where I am now as a runner.  I’m no longer competitive and that’s okay.  I enjoy running at any speed.  My doctor told me I have to lose fifteen pounds by January, five pounds per month, for my health.  That will be perfect.  I can run comfortably at 185 pounds.  I don’t feel like returning to the race scene any more than I care to return to 165 pounds.  I just want to be able to run the trails.