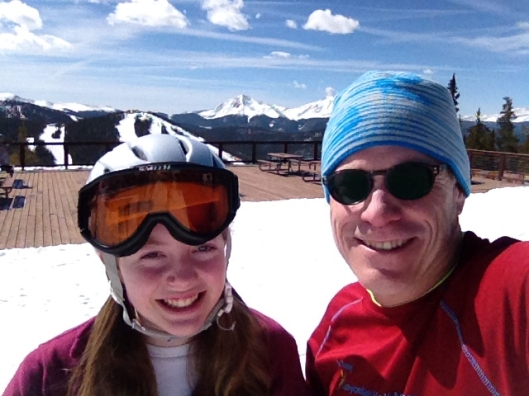 Spring Break’s not over until the snow melts.  And that day is near.  Keystone closes their slopes tomorrow.  The Nordic Center closed at the end of March.  We drove up Thursday afternoon in zero traffic. I first learned how to ski here my senior year of college, 32 years ago. No lessons. I rode to the top of the mountain with my brother Steve. He told me I’d learn on the way down. Same brother who taught me how to play baseball right handed. I’m left handed. 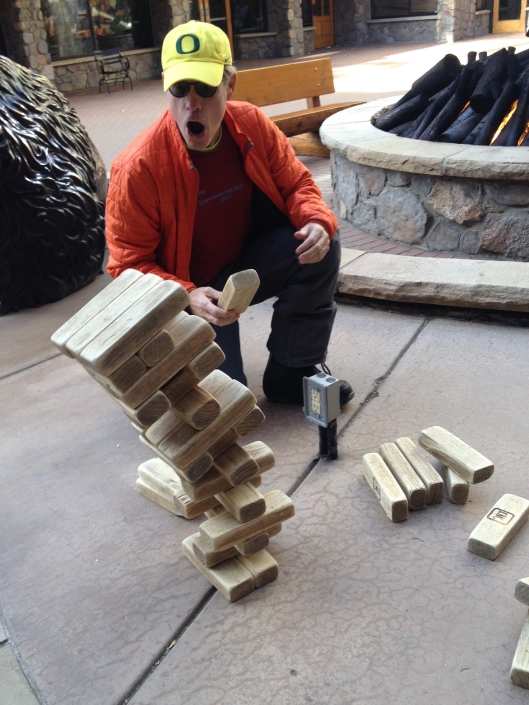 We could not have asked for nicer weather. Ellie and I started with a large game of Jenga, waiting for the lifts to open.  Then we took the River Run gondola up with plans to snowboard nothing but greens back down. This was our routine all day. We boarded down the aptly named Schoolmarm trail.  We stored our jackets in a locker after our first run, it was that warm. Saw one guy skiing in shorts on Friday and many more on Saturday.

Schoolmarm is 3.5 miles long. We got in three runs for 10.5 miles. I swear to you, running 10 miles is easier. I’m certain if we weren’t such novices, we could have boarded much more. We both improved dramatically by the second run, but boarding with the breaks on is one helluva workout. My legs were too fatigued for a 4th run. By the end, I could barely manage to stand back up after falling. And I fell often. I fell into the yellow plastic snow fence at one point. Saved me from dropping off a small cliff. 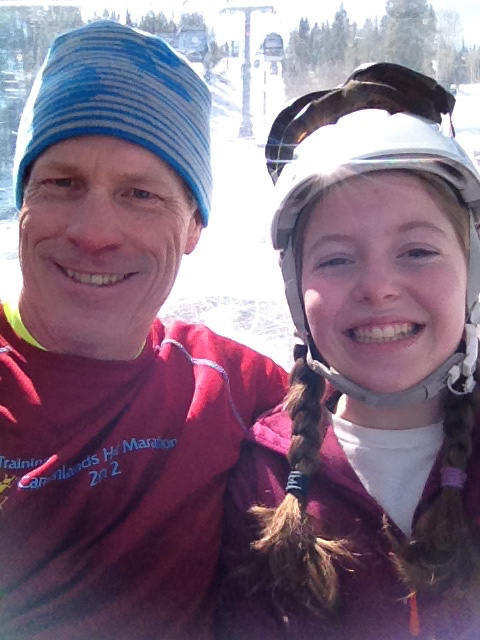 I was a little surprised Ellie is better than me at boarding.  She has better form.  I think I began to shift from heel to toe quicker than her, but she could go so much farther before resting than me.  I tried to catch her at rest stops but my thighs would be on fire to the point I was nearly in tears.  Snowboarding probably isn’t so tough once you learn good form, but I’m still fairly novice at it.  I intended to snowshoe later with Karen but was way too fatigued to even think about it.  She had to work most of Friday, and then she also needed to practice new Jazzercise routines for a third class she picked up recently.

Ellie and I lunched Friday on top of Dercom Mountain before our last run.  She said the pizza was the best she’s ever eaten.  I tried to explain to her the phenomenon of how good food tastes when your body is extremely starved of calories.  She didn’t go for it though.  Apparently the food is pretty good on that mountaintop. 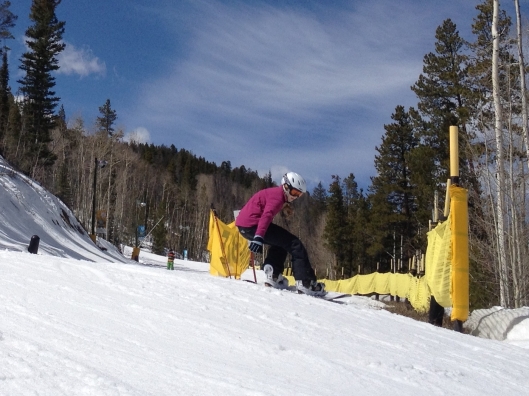 While Ellie is clearly ahead of me in snowboarding skills, she took her share of spills.  I captured one in this pic.  Ellie fell so hard and often whenever she attempted to board on her toe edge, her knees are swollen with bruises.  We gladly soaked in the hot tub upon our return to the lodge for a good hour.  I took in the steam room as well.  The Keystone Lodge and Spa is a nice family-oriented property.  Not everything was available, some restaurants were closed, being the end of the season.  This was true for the slopes too but it’s arguably worth it given the smaller crowds and light traffic.  There was certainly enough snow for Ellie and me. 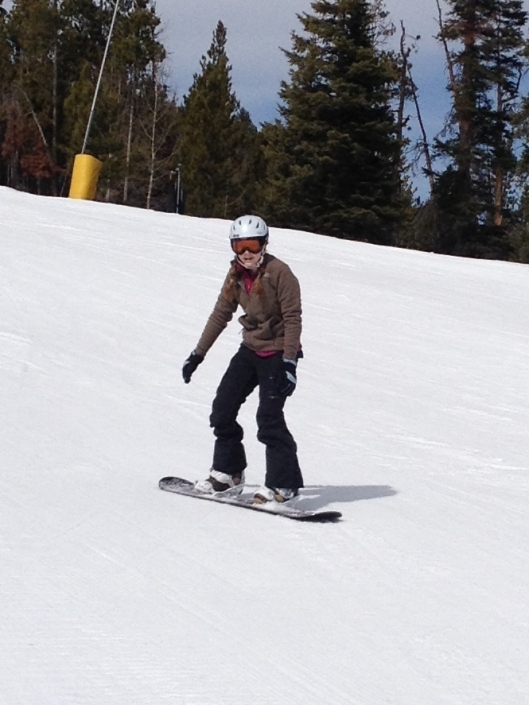 We expected dramatic improvement in our form Saturday but discovered snowboarding is even harder when your legs have been left shredded from the day before.  We strategically first boarded down a short slope to warm up but it didn’t help.  It took us twice as long to board down the 3.5 mile Schoolmarm trail the second day.  Our legs were too weak to work on our toe edge much.  The requisite confidence just isn’t there when your legs are like jello.  We still had a good second day.  Shorter, but just as exhausting as our first day.  An older skier ran into me near the bottom, in a slow zone.  He couldn’t find it in himself to apologize, instead he focused on trying to blame a slow moving skier downhill from me.  That girl at least asked me immediately if I was okay.  I was but highly irritated at this guy’s poor behavior, and I let him know it.  Because I was paying attention, I saw him coming and positioned myself for the collision.  Otherwise it might be a different story. 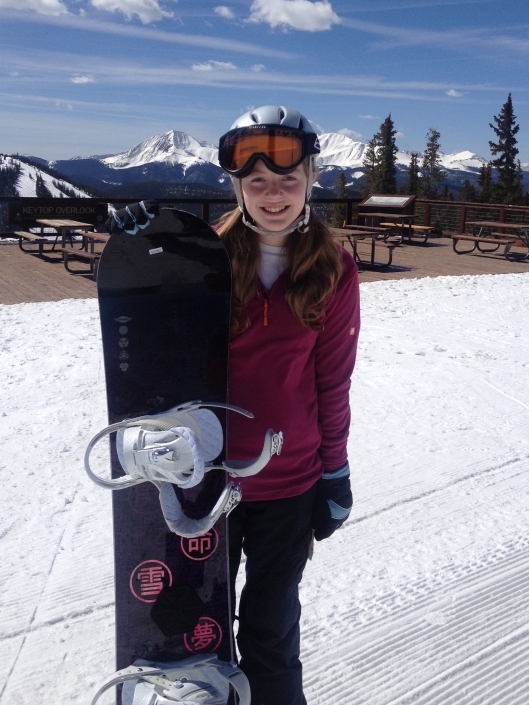 Ellie and I made our plans for next year.  We intend to kick off the season in November or December with a private lesson.  Ellie also wants her own snowboard for her birthday – which is in a couple of weeks.  She used Brit’s board this year.  I think I’m good on gear but like the idea of starting out with a private lesson.  I know proper form will pay dividends in terms of further enjoyment of the sport.  Even if I always suck, it’s so incredibly fun to join my daughter in such a thrilling activity.  I absolutely love Colorado.  Life is good. 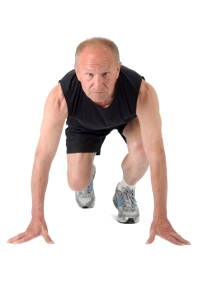 I forget the context but a friend on facebook recently called me middle age.  Ray called me a couple of other things too which I didn’t debate but I did ask him to define middle age.  He responded over 40.  Hmm.  Then I read a story in the WSJ this morning on mid life crises and related nuances of my age.  What’s weird to me is that I just never feel it.  Of course I’m middle age but I don’t spend much time looking at myself and if it weren’t for the reminders like my symphysis pubis arthritis and friends like Ray, I’d be oblivious to it.

But now I’m thinking about it.  I guess that’s what you do with all the free time available to us pending seniors.  But Honey Badger don’t care.  Honey Badger don’t give a shit.  I find it ironic, and not the least bit vain, that Karen and I are in better shape than we were ten years ago.  That’s less true about Karen because she’s been good about maintaining her shape over the years.  She never let herself go as far as I did.  Friends and family constantly inform me that Karen looks so young for her age.  Perhaps because I tend to consider this a backwards compliment, I respond on how the 2′ x 7′ foot slab of double vanity granite in our master bath is a virtual shrine to the mid-life industrial complex.

With my preoccupation over the thought of middle age building, I did what any other average 49 year old with 4 wifi servers in his house would do – I googled middle aged runners.  I came across this cool blog that has a similar theme as mine but the writer probably does a better job at chronicling his races.  And apparently he runs faster than me.  But not by much and reading it motivated me to get in a good workout today.

I’m actually fine with the direction the second half of my life is taking.  I seem to be improving upon my areas of interest.  I’m reading more.  I’m focusing more on trading which for me is more about enjoying a hobby than about planning for retirement.  And Karen and I both are clearly putting much more time into fitness.  Karen doesn’t run, she’s my tiny dancer.  She likes to dance as an aerobics instructor.  This is not something one makes money at – trust me.  You can argue you’re not paying for a gym membership, but the appeal of teaching is that the time spent making a playlist, choreographing the routine and practicing serves as a much more intense and satisfying fitness experience.  Karen taught Jazzercise for over 5 years and has now moved on to teaching Zumba.  She compares them by describing Jazzercise as aerobics with a dance flair to it while Zumba is dance with an aerobics quality.  She favors Zumba.

So after having thought about what I’m doing in my middle years, I’m happy.  That I’m actually becoming more fit each year as I age is a blessing.  I feel fortunate.  The last few years of returning to racing and hiking in the mountains is like reliving the best times of my youth.  It’s a fantasy really.  I’m good with it.