This morning’s Boulder Marathon is what all my massive mileage training is about.  Over 600 miles in the heat of July and August.  Last weekend’s relay race over Georgia Pass has me feeling confident.  Although, working 13 hour days in New York all week and only exercising less than 60 minutes in aggregate on hotel aerobic machinery has me questioning my taper plan.  My legs should certainly be fresh.  Hopefully the unabated restaurant and bar calories will find purpose twenty miles from now.

Chris and I start out together the first half mile.  We’re both wearing shorts and tech t-shirts without gloves despite the 47° starting temperature.  It will warm up 1° per mile; we couldn’t ask for better weather.  Chris is running the half marathon and surges ahead of me in the first mile.  I’m not wearing my Garmin, it’s recording stats but in my pocket.  I’ll relate my mile splits here but I don’t know them while I run.  I run my first mile in 7:42.  The only bad start in a marathon is one that goes out too fast.  This is probably too fast but it is mostly downhill.  The next five miles are up hill. 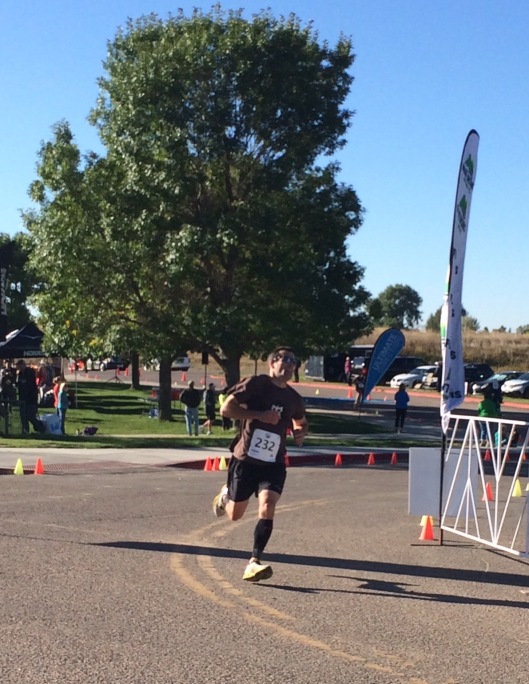 Still, my next four miles are in 7:23, 7:32, 7:49, and 7:49.  I watch Chris this whole time race about 200 meters ahead of me against two guys in blue and one in yellow.  There are less than 400 runners between the full and half marathons, so we’re completely spread out after two miles.  Chris drops the two blues before hitting Niwot Road at three miles and runs even with the yellow guy until five miles.  At this point, Chris surges and increases his lead over me to a quarter mile.  The yellow guy surges a couple of minutes after Chris, but never again reaches him.  Chris sees me after a goofy loop-back turn off Oxford Road and puts on a massive surge that takes him out of sight for me until I see him at the half finish.  This photo shows his kick near the end. 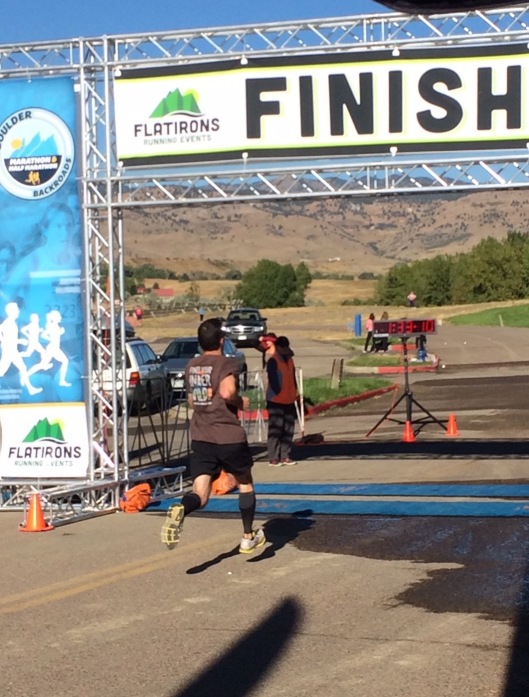 Chris finishes 5th in his age division and 34th overall.  I think the half is more competitive than the full.  You get a sense of how fast Chris kicks in this finish photo based on how high his feet are off the ground. His 1:33 is a personal record.

I cross the half six minutes behind Chris in 1:39 – which is a good ten minutes faster than I expected. I see this time on a clock at the Boulder Rez.  This is surprisingly fast in a 7:30 pace but I feel strong.  I run much of the second 10K with Gadi, a runner who recently moved from Israel to obtain his Masters in Psycology at Naropa University in Boulder.  We talk much of the time but he finishes at the half.    I’m certain at this point I can run a second 13 miles, I feel that strong.  I do expect to slow down on the upcoming hills and do by a minute to an 8:30 pace as the third 10K gains elevation again. 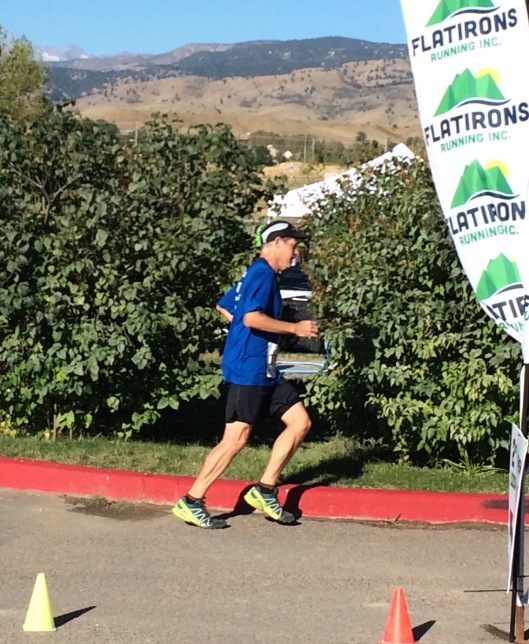 My legs become heavy on the final uphill mile, the 19th mile, but I pick my pace back up at twenty miles.  Some other runners begin to surge here, sensing the downward slope.  I don’t get into a race though because I know I won’t be able to hold it.  My goal all along has been to feel comfortable the entire race, which is why I don’t monitor my watch.  I pass a couple of runners on this final 10K and one passes me.  After 22 miles, the course turns off Niwot Road onto a trail along an irrigation ditch.  The gravel feels like hot coals under my tender feet.  This begins my slowdown as my stride significantly shortens.

I tend to describe bonking or hitting the wall in terms of running out of fuel, but this is how it feels.  All the muscles in my abdomen and upper legs begin to melt.  The heaviness and burning from lactic acid would be preferable to this sensation of vanishing body parts.  My slowing pace is like a dream where I’m running but moving in slow motion because I don’t have control.  I picture my blood cells moving into my muscles and stealing away without replenishing the lost proteins.  It’s a brutal scenario where momentum is only maintained by leaning forward and hoping my legs drop in front of me in time to catch my fall because I haven’t the ability to contract my thighs and lift my knees.  I don’t bonk necessarily here but slow down even more at mile 24.  This slowdown is more from heavy legs – not nearly as painful as hitting the wall.

The cheering crowd steers me toward the finish line like sirens to the rocks. I yank my Garmin from my pocket at the 26 mile sign and notice I’m close to a 3:30 Boston Qualifying time.  I didn’t plan on sprinting to the finish, but pick it up a bit anyway for the final quarter mile.  I cross in 3:30:05.  Five seconds off qualifying for Boston!  This doesn’t actually bother me though because I wasn’t trying to run this fast.  Even with my slowdown the final two miles, this marathon was everything I hoped it would be.  I felt great.  I’m totally satisfied.  I never bonked.  And my second half was only ten minutes slower than my first, not a bad margin.  Good enough for 12th place overall, although only 4th in my age division.  50 year olds are fast in Boulder.  I would have either won or taken second in just about every other age group.  I complete my day with a massage at 3pm, a steak dinner at 5, and I’m watching CU go into overtime against CSU.  Awesome day!