On second thought, racing a trail half marathon without proper training might not have been such a good idea.  I wasn’t ready for the Ridgeline Trail in Castle Rock this morning.  At least I wasn’t stupid enough to sign up for the 50K (31 mile) ultra.  Chris did though.  He’s still picking up his feet in this picture above, just starting out at 8am. 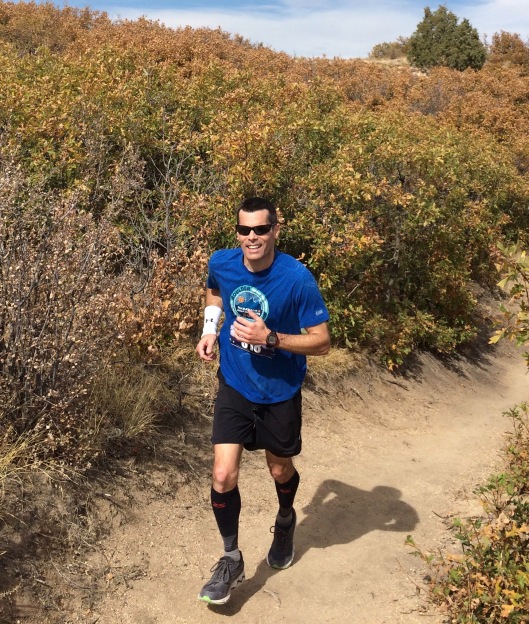 Actually, Chris did quite well for his first ultra.  He finished second in his forty year old age division and tenth overall.  He’s still smiling in this photo above, even though it is after the 26 mile (marathon) point.  Although, he was crying “ouchie” as he ran by.  I have to say that the trail rarely looked this nice.  It was mostly rocky with tree roots, a lot like the Picture Rock Trail in Lyons if you’re familiar with that.

Worse part though wasn’t the technical footing, it was the non-stop undulating elevation. Every ten yards alternated between uphill, then down hill, then uphill.  Think rollercoaster, for thirteen miles.  The foothills themselves were runnable, I didn’t have to walk any, but somehow it contained 3500 feet of elevation gain.  I started out slow but my legs were still mush after six miles.  The course was a loop, but out and back in the sense it climbed over the same hills on the return.  This is Chris at the final ultra aid station, with three more miles to run, taking time out for brunch.

This final photo of Chris is with only two hundred more yards to the finish.  He looks happy.  I only ran a fraction of the distance, and can tell you I’m beat.  I ran 2:06, which might be okay for the course.  Still, I normally run 1:45 for the first half in a full marathon, so sort of slow.  And painful.  Cool training course if you make it down to Castle Rock, but very, very tough.