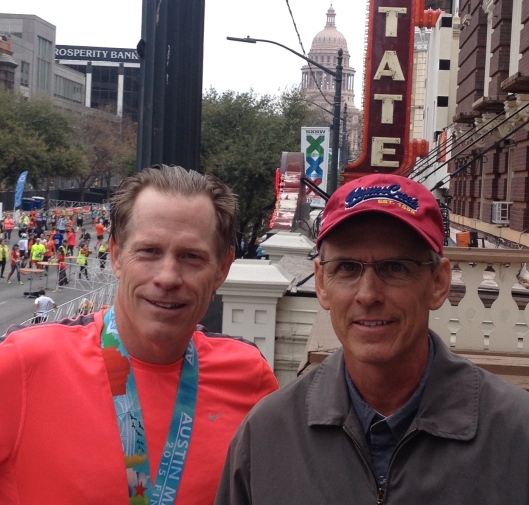 Nineteen hours after arrival, my eyes stare south down Congress Avenue at the first mile of the 2015 Austin Marathon.  My stomach reminds me that I could still be in bed, warm and comfy.  My legs are simply ready.  Born and bred to run.  Primed.  This was their idea.  I know winter marathons to be a bad idea.  The Colorado ice age inhibits meaningful miles.  But with 15,000 runners poised over my shoulder, I’m in a one way cypher.  My only path is forward, for 26 miles of Austin.  I can do this.

My cold feels magically better.  Maybe colds don’t survive as long in warm winters?  The heat when the starting gun fired was around 60°.  I don’t question it, I’m happy to accept this gift from the marathon spirit.  I can breathe.  “Thank you, marathon spirit.”  So things are looking up for me.  I’m going to run however I feel.

I maintain discipline with the start from 2nd Street and run my first mile in 8:17.  A little on the fast side of plan, but close enough for me.  I feel naked in this crowd without a tattoo and I don’t see anyone I know.  I figure Rebecca started somewhere behind, but don’t really know.  She’s running the half.  We’ll share most of the biggest hills in the first half of the course.  Mile two goes by in 8:03.  I think I ran faster because my legs warmed up, but mile two is more or less the same incline as the first mile.  Same goes for mile three.  I run this in 7:52.  Again, a bit of a miss to the low side but not that far from my previous mile pace.  At this point, I’m at the southern-most segment of South Austin.  I turn right and run up hill for a few more blocks on Ben White Blvd., before returning Downtown with another right-hand turn.

I strategically expect my pace will change running down South First Street.  Amazingly unchanged, the homes and businesses still look like Austin when I used to live here.   Somehow cooler now.  Despite the low-hanging clouds, I’m seriously sweating.  85% humidity.  I’ve been wiping mold spores from my forehead since mile two.  I should begin to run well under 8 minutes now, until somewhere in Tarrytown, and I do.  I hit mile four in 7:32.  Mile five in 7:22, again for mile six in 7:22.  This is where I cross the bridge in this photo, turning west along Cesar Chavez.

Mile seven stays low with 7:36, mile eight lower yet in 7:34.  Then I hit the pace I want to run in the hills of Tarrytown.  Mile nine hits 7:59, mile ten 7:58, mile eleven 8:09, mile twelve is in 8:02 and mile thirteen is 8:04.  Honestly, I wanted those times a second or two under 8 minutes, but Exposition and everything west is Texas Hill Country.  Running slower was the right tactic.

The site texting me says I ran the first half in 1:42 for a 7:54 pace.  I’m on pace for my stretch goal, and try maintaining it further.  I’m on the east side of Mopac now, running north up Bull Creek.  I complete the next four miles like clockwork.  I run mile fourteen in 8:00 even.  Mile fifteen in 8:01.  Then a bit of a slowdown occurs on mile sixteen with 8:15.  I’m moderately concerned with this and determine to pick it up.  I run mile seventeen in 8:11, a marginal improvement, but I felt like the time would be faster.  Fatigue is setting in.

The 3:30 pace sign catches me and aids me to run 8:06 for the eighteenth mile.  This is a struggle though.  I let the 3:30 runners go and slow to a 9:04 for mile nineteen.  I’m depressed over this and give things one more shot with an 8:34 for mile twenty – a welcome milestone.  I accept my demise after this and shuffle in with mostly nine minute miles to the end.  8:56 for mile twenty-one, 9:17 for mile twenty-two, and 9:20 for mile twenty-three.  In mile twenty-four, I see Chris Amaro at the Hancock Golf Course.  He runs up the hill with me to Duvall, and leaves me to run in the remaining miles.

I’m done competing and keep an even effort across the UT campus with a 9:18 mile twenty-four, 9:08 mile twenty-five, and final twenty-sixth mile in 9:17.  I cross the finish line nine minutes short of my stretch goal in 3:39, an 8:24 pace.  Once I accepted that I was slowing down, I played up the point that I was also under last year’s pace, by six minutes, so I’m happy with my run.  Disappointed I couldn’t hold that faster pace, but shoot, I had a cold.

Rebecca PR’d in 2:10, this is only her second Half.  We all enjoyed hanging out on the balcony at the Stephen F. Austin Hotel.  Great spot.  I finished up with a massage by Jesse at Massage Envy in Round Rock.  I told her to apply deep pressure, even though I normally like medium.  Figured it would aid in muscle recovery.  It was good, but there were some painful moments.  Jesse could whip out a finger and bury it in my flesh like a switchblade.  I enjoyed fifty shades of massage.  Been basically eating non-stop ever since.  My eleventh marathon is complete.  This ends my winter running season.  I’ll be in Austin for a few weeks, and it’s already spring here.