Brittany likes to dine at classy restaurants, the night before she runs a half marathon.  We all have our routines.  And it was her birthday. 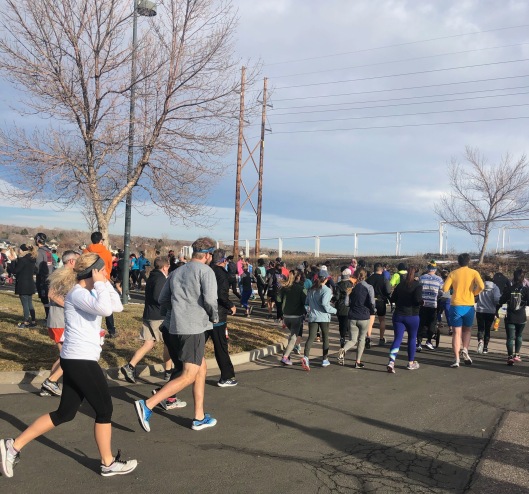 This is a pic taken at the start of the race.  By the looks of things, she appears to be in last place.

That’s Brit’s friend Megan, running in the black top.  She’s known Megan for most of her twenty-eight years. 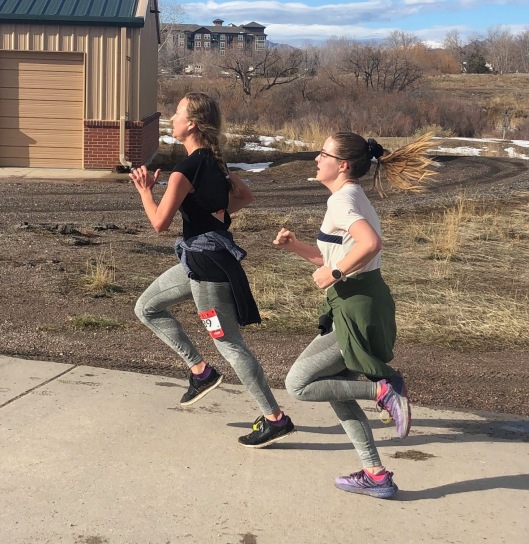 You just know they’re pushing each other.

Good friends finish together.  Brittany said after her kick, she felt alright, her legs were sore but she was able to sprint a bit.

This is what my run looked like today.  On the speed spectrum, I ran massively slow, but the random treachery of the ground conspiring with the weather made it one helluva workout.  Which path would you choose running down this hill?

The course asked many such decisions of me today.  Like life, I didn’t always make good ones.  Eventually, all safe paths ended, making all decisions look poor in retrospect.  Sometimes my only choice was between suffocating mud, and a knee-high glacier.  Sometimes there were no choices and the endings were still either mud or snow.  By picking up my head more, especially on uphill climbs, I learned to read the trail more in advance.  My strategy was to crowdsource the best route by setting my aim along the thin brown line.

Post-holing, ankle-deep, through fields of snow was exhausting, but I was there for the workout.  I forgot sunscreen, and the sun glare off the snow was intense, so I kept my run short to avoid sunburn in the 45° weather.  I fell twice on the return, once after post-holing to my knee.  I fell forward and my face slammed into a pile of mud and ice.  I ran half the distance that Brit did, but it was a great run.

Brittany might be running faster than me just now.  I know Eric is.  But I’ve been running too.  I can’t remember the last time I fell trail running.  I would say that today, the trail won, but I’ll be back there running tomorrow.

2 thoughts on “The Trail Conspiracy”