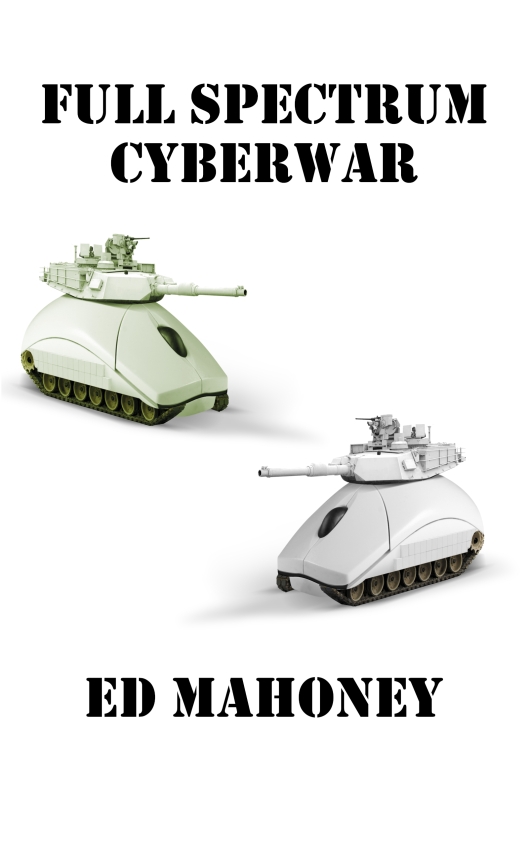 For those of you who haven’t read a good tech thriller in over two years, because it’s been that long since I published Cyber War I, your wait is over.  I published the sequel last night, an ebook version of Full Spectrum Cyberwar on Amazon (₹99 in India) (£2.27 in UK).  The print version is coming soon, once I recover from the tedium of having formatted an ebook and feel up to the task of formatting print.  Self-publishing is not as glamorous as it sounds.

A year after Cyber War I made Robert Warner a celebrity in his field of cybersecurity forensics, he’s ready to cash it all in and retire young, with the sale of his software firm to a conglomerate for over $100 million.  He’s two weeks away from starting the next chapter of his life living large in a Colorado resort community.  He just has one more business trip to complete, an international assignment to pen test a wind farm in the North Sea.

Rob turns over one too many stones and finds himself the target of Fancy Bear, the infamous Russian military hacking organization.  It’s Rob’s nature to dig deeper, to solve the crime.  Instead, he’s forced to play defense, to protect the welfare of his employees, his wife, and himself.  If he can survive a chase through Europe, he can complete the transaction to sell his software firm and retire wealthy.

Full Spectrum Cyberwar exposes the real-world activities of the Russian GRU as they conduct hybrid warfare on their European neighbors in this gripping sequel to Cyber War I.  U.S. CyberCom attempts to confront the Russians with a forward defense strategy that escalates well beyond Major Calvert’s control.  In Full Spectrum Cyberwar, the battlefield extends beyond the keyboard.  Lives are on the line in this relentless exchange of one-upmanship between nation states as they battle for dominance over geopolitical assets.

I know you’re not reading anything else right now, or you wouldn’t be on the Internet reading blogs.  Download my book and give me what I need – reviews!