My family didn’t always meet up for a post-Christmas dinner at Matt’s El Rancho, but now that I think about, I suspect we’ve been doing this for well over a decade.  For this extended family, it’s become a new tradition.  I imagine it appears to you that I’m seated at the end of the table in this photo, but I assure you that from my perspective, I was seated at the head of the table.  There’s an upside-down world reference in there somewhere.

I generally end my blog year with a contemplative post, introspective, thankful and hopeful for the year ahead.  Absent any running exploits to focus this running blog on though, it’s been a sappy December and such content has become my new genre.  I’m a regular Hallmark channel.  Doesn’t bother me though because I welcome change.  I suggested I might stop blogging altogether in my last post but what I suspect I’ll do instead is simply post stories with less regularity, and put more thought into them. 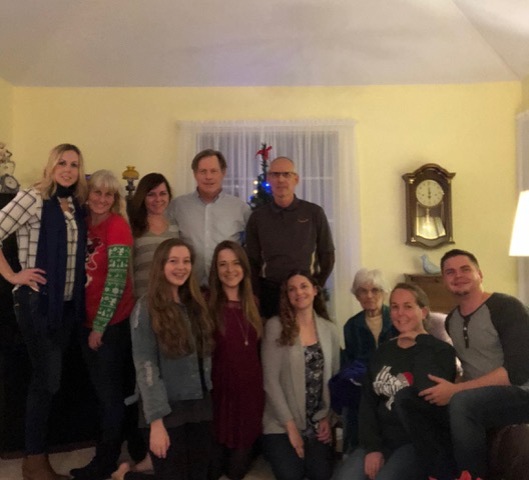 The photo above is of my family at my mom’s house on Christmas Eve.  She is currently in the hospital with a chest cold.  Born in September, 1933, she is 84 years old.  On the drive back home, my kids speculated on how we would celebrate Christmas when our grandparents are no longer there for us to visit.  Our traditions will evolve, likely around the new families my kids themselves will bring forth into this world.  Christmas without my mom and in-laws is something I don’t think about and prefer not to until the time comes.  There are still plenty of good memories to be made without dwelling on sad thoughts.

It’s like which side of the table I’m sitting on.  Am I avoiding conflict?  I would argue no.  I know the future will come, and I’m an optimist.  Making the most of the now is the benefit afforded to optimists.  This was a dark year for many.  I felt it as much as any other social liberal, climate concerned conservationist, or secular scientist.  I’ve refrained from sharing my political views since the primaries because, well partly because I became bored with it, but mostly because I prefer to turn my attention away from negative discussion.  I know that must make me sound like a pussy, it’s certainly not very aggressive.  I’m not that way at my job, but I am outside of work.  I’m not a protester. 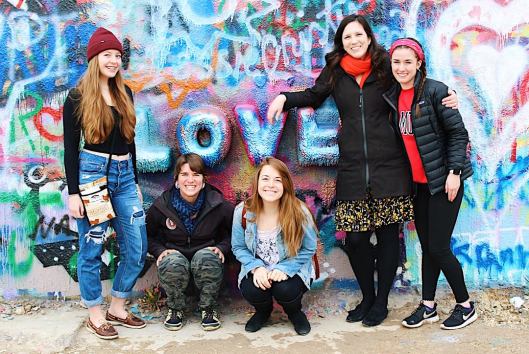 This photo is of the girls with their cousins the other day at the graffiti wall in Austin.  The two blondes are mine.  I can assure you, they are a passionate bunch.  Not me.  I believe the best approach to all this year’s hate-mongering speeches on campus would have been not to protest – to not attend at all.  Ignore them.  Don’t attend.  Don’t feed the beast.  Sure, physical aggression requires counter aggression.  But the hate-filled loudspeakers operating in today’s media only exist on the attention we afford them.  I think I learned this at age eight from an episode of Star Trek.

My favorite TV is the news.  This makes me a fairly boring person in conversations, but I can’t help it.  Still, I stopped watching the news this past year, after the primaries, once I determined it was only making me feel worse.  Occasionally, when there was a big week of news, I’d allow myself to watch Rachel Maddow for a couple of nights.  I mean, who else do you know that can giggle throughout their entire newscast?  I still read the morning paper but for the most part, I no longer watch the news.  I decided it wasn’t helping me, so another new tradition.  I now watch Murdoch Mysteries.  I think enough seasons remain to carry me through 2018.

I feel good about myself when I’m able to change my pattern.  I can’t say it means growth but do feel that change is usually good.  It bothers me to know just how predictable, just how pattern-bound, I am at times.  Blogging every weekend for 8 years.  Running every day.  A drink every night.  A relative commented to me over the holidays he noticed I wasn’t drinking.  He thought I’d quit.  I haven’t but I’ve gone a week now without drinking.  I quit for half a year in 2014 when I had cancer because I couldn’t drink half a beer without finding myself sitting in a dark room listening to Pink Floyd.  I don’t mind a little melancholy but that was time in my life when maintaining positive thoughts were paramount, so I simply quit drinking.  Don’t feed the beast.  Of course, I was happy to start drinking again because that signified I had moved on.

New Years resolutions are all about change.  Change is good.  At least, it can be.  Embrace it.  Set some goals for yourself for 2018.