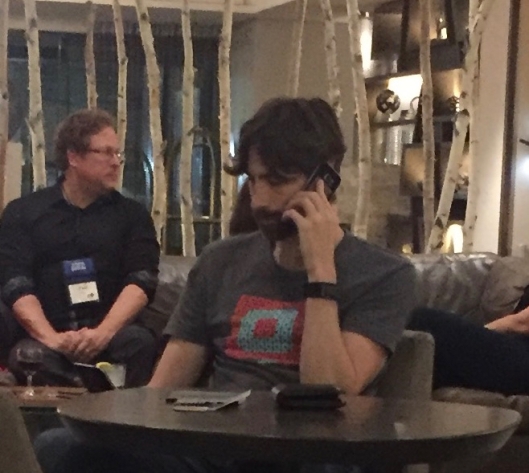 How big is your wallet?  Look at the objects on this tabletop.  I bet your wallet is not as big as Dmitri’s is.  I don’t really know his name.  Like any other guy, I was minding my own business in the hotel lobby when I was engulfed by a gaggle of techies attending some international conference for the betterment of humanity.  This guy sits in front of me, blocking my view of equally attractive people, and proceeds to pull out his wallet. Seemingly to make room for, not just one, but two smart phones.

To his credit, he used both mobiles at the same time.  Possibly dueling the same issue that was so important to him that he worked it while his comrades drank voraciously nearby.  Sounded more to me though that he was working some tech issue with skilled subject matter experts on the one phone, to the point he could set it down occasionally, while he yelled at the Help Desk on the other.  The wallet, despite serving as a focal point to at least me, was lost in all this performance art.

If you think it’s bad how I’m making fun of this guy, you should consider how much worse it is for me to take a photo of a complete, non-celebrity stranger, and post it online.  I don’t care.  This guy has earned a role as a European hacker in my pending novel.