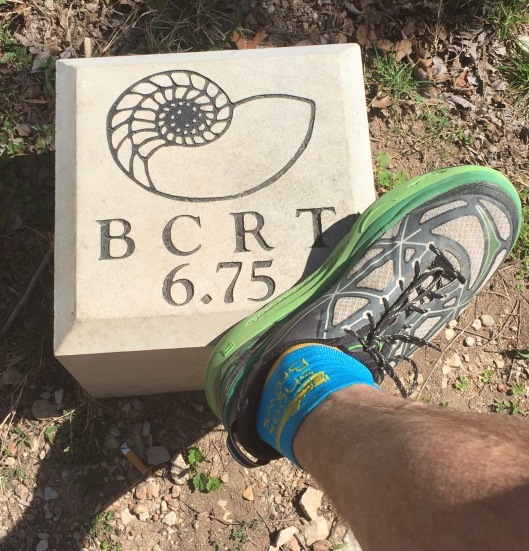 I arrived at ATX last night a little before midnight.  The car rental desk at Budget was unmanned.  There were no signs with instructions but I got lucky somehow by asking the staff at the Avis desk for help.  I seem to recall those firms merging a few years back.  Not sure but Avis did indeed have my rental.  Got a Jeep Patriot for $12 a day.  First they upgraded me for free.  Then they pitched about $70 dollars in various options for insurance coverage, which I suspect was more expensive for my upgrade.  I declined everything.  I was too tired to understand anything being said and it felt like such a scam.  Not happy with the Patriot.  Big box with low visibility.  Handles speed bumps well though.

Got in 13 miles on the Brushy Creek Regional Trail this morning.  Weather Channel called for a 10% chance of rain.  That would be an all out rain shower in Colorado but it translates to clear skies in Central Texas.  After a half mile, mold spores began to form under the brim of my cap.  Before a full mile, the mold dropped from my hat and dammed up on my eyebrows.  By two miles, sweat was streaming across my face like the river over the spillway at Perdernales Falls.  I don’t know how people live here.  Many other runners were shirtless.  Not me.  A 53 year old running shirtless is like Trump referencing his penis at a GOP Debate.  People aren’t asking to see my white belly.  I suspect when we do see Trump’s tax returns, we’ll find out he’s been exaggerating the size of all his assets.

A half marathon is as much as I get from the BCRT.  6.75 miles one way but I run out and back from the east end along Harry Man Road.  I’m down here for my niece’s wedding tomorrow.  Thought I could squeeze in another run but I’ve since been tasked with some Uncle duties driving people around.  That’s fine.  The wedding is in New Braunfels and I’ve already set plans for lunch at the Faust Brewpub.  The day will be full of reuniting with sisters and family whom I don’t often see.  Looking forward to it.

1 thought on “Weekend in Texas”