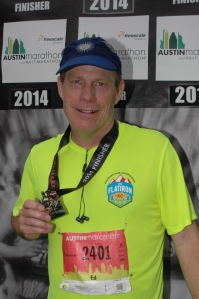 Got in a couple more miles in Austin today before flying home.  Thirteen more to be exact.  My flight isn’t until 8:30 tonight.  Too late to make Steve’s poker game.  Not too late to see Karen after my three weeks away.  Ellie will be at a sleep-over.  I imagine Karen will have already eaten dinner.  Maybe she’ll want to stop off for a drink somewhere.  Of course it’ll be after 10pm.  We’ll think of something.

I had some good runs down here.  I ran 26.2 miles across the streets of Central Austin – surprisingly fast (for me) in 3:45 and felt good doing it.  I had a fantastic trail run at Pedernales Falls – a state park with special memories for me.  I ate at my favorite restaurants and discovered some new ones – from sushi to steakhouses.  Saw a movie at the new Alamo Drafthouse at Lakeline. 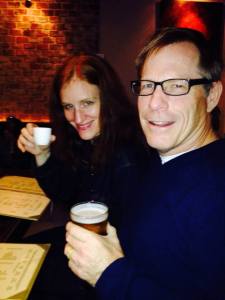 I hung out with family; eating multiple plates of sushi bombs followed by quail egg shooters at Tomo’s, ate the best Thai ever.  My father-in-law plied me with a 2011 Round Pond cab sav and bought me one of the best ribeyes ever at Flemings in the Domain.  I played several rounds of Cards Against Humanity – always a riot.  I also saw some old friends.  Visited Ray Johnson in San Antonio where I drank home brew better than I can buy in a store.  I met up with Johnny Martinez in Austin.  This was a complete surprise as my sister ran into him in the grocery store.  We first synched up at a Starbucks but went out last night to Top Golf.  If you haven’t been to a Top Golf locale, think bowling.  No, think swanky outdoor club with fire pits and live music and dance floor.  No, think pub food.  It’s hard to describe but pretty fun.

My run today was in the quintessential Central Texas rain and mist.  Actually great for running.  I planned to run down on Town Lake for my last day but Mom wasn’t feeling well so I opted to stay close by.  I ran 13 miles on the Brushy Creek Regional Trail.  Fairly pedestrian but really nice with the creek, Live Oak and Texas Cedar.  My knees don’t care for the pavement but a good half of it is softer trail.  Next weekend is Moab.  That will be my last run for awhile.  Which is fine.  I have a sore knee that could use the time off.  I’d like to squeeze in another snowshoe or two with Karen.  I’ll need something to blog about.