The sun crested the Continental Divide around 5:30 this morning and I captured this picture from the porch of our cabin in Pagosa Springs.  The winds that blow to the north and east all day whittle away at dusk allowing the smoke from the West Fork San Juan fires to settle like mist around the hills throughout the night.

All the cool hikes I mapped out ahead of time along the Continental Divide for Keith, La Plata and me were off limits due to the fires.  We resolved to hike the Four Mile Lake Loop but had to turn around en route as we encountered the signs stating it was closed due to the fires.  We assume it was because the trail connects with the danger zones and the authorities are controlling access.

We redirected our plans and drove about eight miles south of Pagosa on Hwy 84 to Blanco Basin Rd.  Nearly ten miles down this well maintained gravel road we turned onto Castle Creek Road, Forest Road 668 and continued for maybe a half mile, veered left at the fork and arrived at the trailhead to the south end of Leche Creek Trail.  Drive slow if you do this to watch for cows on the road.  It wasn’t immediately clear that the trail starts further up the road because there is a cairn in the other direction, but it leads to a camp site.  Two or three miles in we entered the South San Juan Wilderness Area where all vehicles, including mountain bikes, are prohibited.  Until about half way to the north end of the trail, the only tracks were from horses.  In fact, a pair of horseback riders were the only others we brushed by on our six hour hike today.

This trail runs north and south and isn’t the technical experience I intended.  I planned for La Plata (Rob’s trail persona as he hikes the CDT) to lead us along something more steep if not the CDT itself, but this was decent exercise.  The weather was cool for most of it, in the 50s and 60s.  The trail alternated from trees to meadows.  Occasionally we were presented with some nice views.  The course was mostly uphill until around eight miles when it dropped down some switchbacks to the unsigned junction with Navajo Peak Trail. 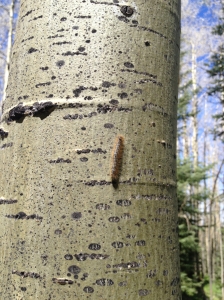 We sat down on the ground here to recover some calories.  Very soon, killer caterpillars were crawling all over us.  These Tent Caterpillars are nesting in many of the area Aspen and killing off the leaves.  Not sure about the lasting effect to the trees.  Many of these trees were over 40 feet tall.

Back to calories, do not eat GU Chomps Energy Chews.  That tripe smells and tastes like fish bait.  Honey Stinger doesn’t need to worry about competition from GU.  These caterpillars probably taste better.

The trail had a couple of steep rises, otherwise the grade was fairly tame with a gain of 2500 feet over 8 miles on the way out.  The final mile was a 500 foot drop, Keith lead us out on the return at a strong pace.  This flume of smoke came into view upon reaching the top

La Plata got us running on the return for a good three or four miles.  This was likely due to the downhill grade on the way back.  We saw some cool stuff on this trail.  The Aspen trees were humongous.  Many had initials carved into them dating back to the ’30s and ’40s.  The oldest I saw was dated 1931.  Keith discovered some wild asparagus – red in color.  And I nearly tripped over this fawn lying on the trail.

About twenty steps before where the baby deer was hiding, I thought I saw a big deer running through the trees and snorting.  It was shadowy so I wasn’t certain it was a deer, but the snorting was weird.  La Plata suggested it could be a bear.  We suspect the deer was trying to attract attention away from the fawn hiding on the trail.

There won’t be any more 18 mile hikes this week.  And we might wait to run later in the morning to let the smoke clear if we hike/run close to Pagosa.  Tomorrow’s plan is to run up Jackson Mountain which is essentially in our back yard.  This will only be five to seven miles depending on where we start.  I’m re-evaluating my hike plans based on fire closures but there’s so many trails in this town I’m not too concerned on each day being anything less than spectacular.