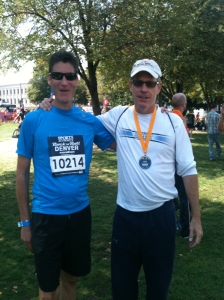 I got a recovery run in this afternoon – first run after Saturday’s 26.2 miles.  My initial steps left me questioning whether I’d make it out of the neighborhood.  The pain was focused in my groin and my stride wasn’t much better than the short shuffle I ended with in Saturday’s marathon.  I made it out of my neighborhood and reset my 3 mile goal to 1 mile.  All I wanted to do was work out the kinks.  I was feeling kinky.

After a mile my muscles relaxed and I wound up doing a 4 mile recovery run.  I don’t think I’ve ever been this well recovered after a marathon.  Maybe after my young age marathons but certainly not after my other 2 old age marathons.  I don’t even have any blisters.

This picture is of Keith and me after the run on Saturday.  I was able to talk to him more about the run today via email.  Keith mentioned two big factors.  One was the pavement.  That didn’t occur to me but both of us mostly run on trails and are not used to asphalt.  Keith noticed and it might be why my knees are still sore.  There’s no asphalt for old men.  I don’t intend to try adapting to roads though.  The Boulder Marathon will be on some gravel roads and I’m hoping it’ll be lower impact.

Keith was also affected by his foot injury.  That was predictable and really his only option to address that would have been not to run at all.  Had he seen a doctor he would have needed an MRI for a diagnosis and that would have taken at least a week to schedule.  Plus any diagnosed injury would take 6 weeks to heal and that would put him at risk of not completing his first marathon while 50 years old.  I know if I’d put as much effort into preparing for this run as Keith, I would have taken the risk to run it too.  Of course he risked further injury but mostly he just had to run with pain.  What a bad-ass.

I’ve ordered my digital pics and expect to use those for my next few blogs.  They didn’t look that good but still, it’s not like I have tons of marathon pictures.  Looking over my stats, I think I’m most pleased by my pace.  Not the overall 8:42 pace but the consistency I held between my first and second ten miles.  I only ran 5 minutes slower from mile 10 to 20 as I did the first 10 miles.  And I suspect those 5 minutes were all lost after mile 18 when I know I began to slow down.  I’ll work on that with some core exercises before the Boulder Marathon.  Just a few more kinks to work out.