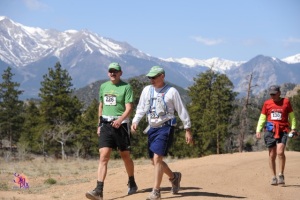 I tried to run through this foot injury but it’s a busy week with work and I just don’t feel like it anymore.  I haven’t run now since Saturday.  I’m going to do what any sensible slacker would do and take time off until I heal properly.  There’s no running for old men.

I’m a little bummed because I was starting to average longer runs of 7 and 8 miles per day.  This ain’t intramurals brother.  Running starts to become addictive at that daily distance.  Fortunately, I have a box of Buster Bars to help me get over the sudden decrease in endorphins.  Thanks Jules.  I also wanted to train for the Bolder Boulder 10K on Memorial Day weekend but I don’t care really.  I might not beat last year’s time but at least I know I can run that distance regardless of my conditioning. 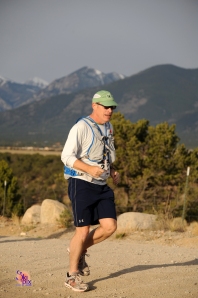 These pictures finally arrived from the CPTR.  If it looks like Rob and I are walking, well we probably are.  That picture above was taken at the crest of the first big climb at the 11 mile point and 9200 feet.  So yes, these two old men aren’t running here either.  Neither was anyone else.  These mountain trail runs are more of a shuffle really than balls-out running.  You take what the course gives you.

I really liked the fact Rob and I were able to stay together the entire course.  We didn’t plan that and it’s rare I run a full race alongside a buddy.  Although this is one event I didn’t need a friend to talk to.  Ultra runners are the chattiest group of athletes I’ve ever encountered.  I had maybe a dozen conversations on this run.  The CPTR was a very enjoyable event.  I’ll consider it again next year.