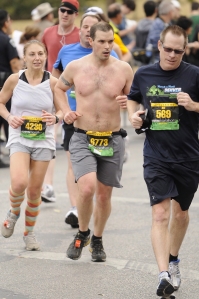 See the way these runners are eyeballing me in the last 50 meters of the Austin Marathon?  Either they are concerned about me dropping dead in front of them, or they are amazed how anyone in Texas could possibly be more butt white than they are.  Regardless, they went on to pass me in their sprint to the finish line as I was struggling to maintain even a semblance of forward motion.  And this is because like the hare and the tortoise, I started out running too fast a pace and couldn’t hold it.  Sure, I was quick to blame my shoes and inserts.  So now I’ve showed my personality, so what?  Actually, I don’t blame myself for being quick to cast aspersions elsewhere; I blame my hypocritical, unaccountable, debt-ridden, hippie, boomer culture for setting my thought processes to where I would assume fault elsewhere before considering to blame myself.

And then my buddy Rob, aka A Lo Hawk, suggests that I should always begin a long run at a fast pace.  I immediately saw through this facade of apparent advice for what it was – calling me stupid for not controlling my pace.  Fair enough.  I used to understand my pace better but have clearly lost that experience.  I recall in high school cross country, when we only raced 2 miles, my running mate Mike used to beat me daily in practice – but I would finish ahead of him on race day.  Part way through the season I convinced him to start off slower.  He did, and he never looked back.  I didn’t beat him again in a race until late in the season after he drove his Ford Mustang into an opposing school bus.  The resultant head concussion took the edge somewhat off his racing prowess.

Don’t be fooled by the a lo hawks of the world.  Use the start of any race as a warm-up.  I felt so comfortable during the Denver Marathon after having slowly increased my pace.  I so wish I’d have ran that way in Austin.  My memories would be that much better.  Since I’ve renewed my interest in road races last summer, I’ve yet to actually put on a kick at the end.  I’m not really racing and so far I haven’t seen any reason to finish up sprinting.  I would however like to run the entire event comfortably and finish strong.  But that won’t happen by starting out too strong.