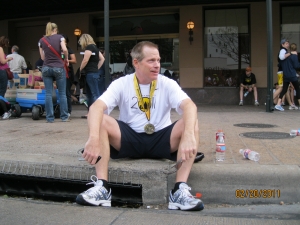 OK, now that the race is over, work is behind me and I’m airborne headed back from Austin, I can muse over Sunday’s marathon and other post race events.  It all went so fast.  A business trip to Detroit midweek, return home to Longmont Friday night, fly to Austin Saturday afternoon and big run on Sunday morning.  I was already apparently mentally fatigued half way through these events because I missed the exit for Pena Blvd on the way to DIA Saturday and drove another 10 miles on E470 conversing with Karen before I noticed.  That added to my toll charges.

I understand now more of why my run was so hard.  And I feel stupid for it.  The primary reason was my shoes.  Or more specifically, my new Sofsole inserts.  As I related in an earlier blog post, I bought them just this last week and was able to walk in them enough to be confident I wouldn’t get blisters.  But I wasn’t able to run in them.  To be fair, I might not have noticed the problem.  I would have only run 4 miles or so training but I didn’t notice my feet hurting in the marathon until 10 miles.  But man, when they started to hurt, it was like walking on hot coals for 16 miles.  My feet hurt both top and bottom.  My first thought was that I laced them too tightly.  Of course I put up with that until late in the race before loosening them, but it didn’t make much difference.  It didn’t affect my soles at all and only slightly alleviated the tops of my feet.  This didn’t make any sense at the time.

After the race, I figured the unique lacing architecture contributed to the top foot pain.  This shoe, the ASICs Gel-Nimbus,  has a unique lacing pattern that is off-center following a point from the big toe at the bottom of the shoe, up to the middle near the ankle.  I can tell you now that this is stupid.  You might not ever notice it on shorter runs, but it becomes quite evident in a marathon.  I hate to be overly critical of an ASICs shoe, because they’ve been my favorite training and racing shoes my entire life.  I’ve rarely deviated from them.  However, meeting up with family and friends at this event provided me with interesting feedback on my running blog.  I’ve heard before that it motivates some people to run.  I heard more of that this weekend.  But I also heard for the first time that my description of running gear and apparel motivate my readers to purchase some of the mentioned products.  Clearly that’s not my intention.  I don’t receive ad revenue.  I am only averaging 10 hits per day so that’s hardly an ad revenue business model.  But I do want to be as helpful and informative on products as I try to be on any other stories that could be mistaken for advice in this blog.  The askew lace design sucks.

The second issue with this shoe is that I bought it for its advertised stability.  Indeed, its promoted stability.  The shoe is in both this season and last season’s Runner’s World training shoe roundup.  I bought last year’s model and it still did not prevent me from pronation.  Beyond the lacing pattern, I think the shoe design itself is probably fine for stability but it needed new inserts.  Why the hell do they sell $140 shoes, designed for stability, with such cheap inserts?  Do I seriously have to spend another $30 on my own inserts?  After the pain I suffered through the last 16 miles of the Austin marathon, I don’t mind ripping on these shoes.  Yeah, ASICs was great when I was young and fast.  I always felt like they were a fast shoe that matched my running style of a mid-foot to toe landing.  But I land on my heels nowadays.  At 48, I’m no longer sprinting through long distance runs.  I’m ready to move on and will be sporting a new shoe for next month’s Moab Half Marathon.  And while I’m dishing it out, what’s up with Runner’s World.  Their writers wear a pair of shoes to evaluate for a week or two as part of their normal running regimen.  Wouldn’t running something more substantial like perhaps a half marathon be more journalistically sound?  They wear these shoes on an average run and report on how they feel.  They talk about it feeling hard or squishy.  Man, try running some real distance and report on how your feet hurt so dag-nab much that your ribs and shoulder blades feel bruised too!  Did I mention that the next day I discovered the soles of my feet were all purple from bruising?  Not the entire sole really, but just behind the ball of my feet and into the arch.  Now to be fair, this is probably more from the non-ASIC insert than the shoe, but back to my earlier point – why doesn’t a $140 shoe have decent inserts to begin with?  If I’m starting to come across as an angry writer, I should mention now that I’ve started drinking on the plane.  I don’t generally drink on flights anymore but I’m unwinding and Karen is picking me up at DIA so I won’t have to drive – or search for my car.

So I’ve shared with you.  If any of you want to comment, give me some advice on shoes I should buy.  I pronate in my left foot.  My race pace appears to be 8 minutes per mile for 10K to half marathon, 8.5 minutes for a full.  And I run about 8.5 to 9 minutes per mile on training runs.  I also run trails but have good shoes for that already.  Should have worn them Sunday.  The other post race thought I’m having is on the hills of the Austin course.  I swear I read a pre-race elevation chart that suggested a different pattern.  I described how I thought the hills would go in an earlier blog post.  More importantly I expressed my confidence that I wouldn’t have issues with the hills.  It’s very likely I just read the chart wrong.  I had it in my head that the course would rise for the first two miles then drop for the next four and then rise until the 18  mile point and then drop back down.  I clearly did some shortcuts in my mind.  I’m often accused of having a highly selective memory.  This course hit some small hills at the start downtown.  Nothing significant since they were short and the crowd was so thick that we weren’t running full speed yet.  But South Congress Avenue has a serious three mile hill between the 2 and 5 mile markers.  I felt fine running up it.  The crowd started to thin out and the slope wasn’t steep.  Bit I think that’s deceptive.  Yes I felt strong but I suspect it was still a mistake to run as fast as I did.  I’ve learned this in the Bolder Boulder 10K which is downhill the first mile.  A disciplined runner would force him or herself to purposefully run slow on that.  It’s trickier in the Bolder Boulder being downhill, but regardless; you need to control the emotion of the race start.  Especially in a marathon.  The Austin Marathon then returns down the same slope, albeit on 1st Ave rather than S. Congress.  I did actually refrain from speeding down this slope knowing I had another 20 miles to go.  But for all I know that braking might have contributed to my sore feet.  It was at the bottom of 1st Ave. when we turned west toward Tarrytown that my feet began to scream.  And by 11 miles, I think my form was starting to become impacted.  There’s a hill on Exposition as you near the turn-off to the half marathon where I first truly felt the grade and believe that is where I gave up on the 3:30 pace group.  And when I say I gave up, my pace dramatically slowed.  I prefer not to relate the rest of the run because it would be like reliving a nightmare and my selective memory is in control now.

I do remember some very pleasurable post race events.  For whatever reason, I decided late last year to try to reconnect with my old running teammates from high school.  Actually I know the reason.  My buddy Dave met up with his New Mexico swim team last summer and really enjoyed it.  This seemed brilliant to me because even though I’ve never attended a HS reunion, I am actually interested in the people I ran track and cross country with in high school.  For the most part, I haven’t kept up with them.  But I know them.  Like all distance runners, they’re good people.  I know that Scott Holman would crack me up.  Perhaps because today he’s a stand-up comic.  I know Toby would start me giggling for hours on end.  And I suspect cavorting with Rob or Mike, or certainly the two of them together, would end up with me swimming naked at Hippie Hollow.  As I recall our last skinny-dip was in the month of January and resulted in extreme shrinkage.  If we do have a Cross Country reunion, it should be in the summer.

As bitter as my race experience might sound, or was – my selective memory already forgets – this trip’s highlight was reconnecting with my old friends.  I touched on this in my last post, but I wrote that before having dinner with Toby and his family.  He brought along one of his stunning daughters, Lauren.  And his beautiful wife Margie was so charming I could have sat down with her all night to chat and felt like we’d grown up as neighbors rather than her and Toby.  Toby really did marry the girl next door.  And I still feel so good after meeting up with Nancy Basey for lunch.  I’m not sure how to express this, but it’s somehow very comforting to see that your old friends have grown up and are happy.  Sort of like how a team victory is always sweeter than individual accomplishments.  For all of us to have succeeded in life is just so cool.