Running has never felt so good.  After over five weeks convalescing and walking, I ran three miles today.  My expectations were set for July, but my Urologist did tell me I might be back within a month.  I ran the same trail along Left Hand Creek that I’ve been walking everyday.  I don’t know if I can express how much reaching this milestone means to me emotionally.  I had a silly grin on my face the entire run.  Running means more to me for my mental health than physical.  I feel like this could be the end of the health-related distractions and lack of focus.  I’m back.

My groin began to hurt half way through the run.  That was less than ideal, and a bit of a surprise.  I was monitoring my abdominal pain, breathing and dizziness.  My stomach didn’t hurt until after I stopped running.  While walking a quarter mile cool down, my scars tightened.  My PT yesterday taught me how to massage my incisions in a circular fashion to break up the scar tissue.  I’ll put some emphasis on doing that.  I was mostly nervous over my breathing and dizziness because I’m still somewhat freaked out by the impact from four hours of anaesthesia.  Thankfully I was fine.

My groin pain wasn’t extreme by any means but it did help me confirm my commitment to not exceed three miles.  Pushing myself to the point of injury doesn’t buy me anything.  A one or two mile run would have provided me the same level of satisfaction and confidence that I am progressing.  I’m not in a race, I just need to demonstrate forward progress.  There are times when you need to run through some discomfort.  There are times when you need to train through injury.  This is not one of those times.  I emailed my PT to ask about what I should think about the groin pain.  She responded within a few hours, on a Saturday, with advice.  She’s a keeper.  I describe Jenn in more detail on my prostate blog.

photo removed
Feeling totally stoked, I wasn’t done for the day.  Ellie and I went for a two mile hike on Mesa Trail in Chautauqua Park.  Such perfect weather to be outside.  Hard to imagine the forecast for snow and sub-freezing conditions the next two days.  We followed up the hike with lunch at Sushi Hapa, a browse through the Boulder Bookstore, and some light shopping at the Farmer’s Market.  Ellie bought the next three books in The Maze Runner series at the bookstore.  I bought some bread and two tomato plants at the farmer’s market.  Wow, today is only half over.  What’s next? 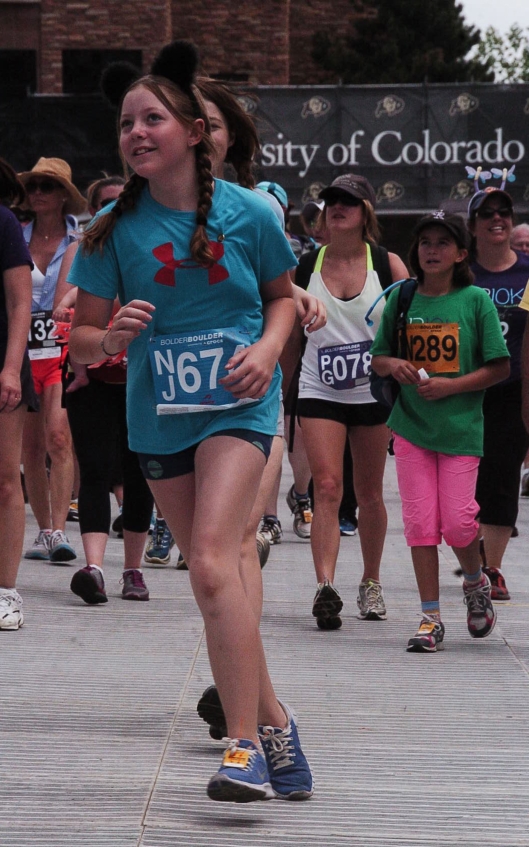 It’s all about Ellie this week.  We fly down to Austin today so she can join her Papa on a trip to NYC.  They have tickets to a couple of plays and her cousin Rachel from New Mexico is also going.  It was quite the girl’s night last night as Karen and Brit helped Ellie pack.  I’ll work the week in Texas and fly back home with her a week later.  Austin is expecting a high of 104° this weekend, with humidity to match, so running will be a survival event.  Regardless, I’ll find a day (maybe next weekend) to sneak down to the Greenbelt for a trail run.  The Save our Springs Alliance is selling this pretty cool map of the Greenbelt online and at area stores for $6.  Maybe I’ll take a dip in Barton Springs to cool off.

I ran 10 miles on the LoBo Trail Saturday and another 10 on the Mesa Trail today.  Twenty miles in two days.  It’s nearly as hot this weekend in Boulder as in Austin.  I ran early this morning to escape the heat, because yesterday’s noon-time run wiped me out.  Today’s run was further enhanced by a Bloody Mary at the Chautauqua Dining Hall, along with my après-run brunch of a Caprese Omelet.

Yesterday’s run was miserable.  I even walked a bit on the return.  Today though was nice.  You can’t not have a great run on the Mesa Trail.  Keith, Steve and I left Longmont for Boulder at 6:30am to beat the heat and allow for our day schedules.  I still have to pack for my 5pm flight.  We met up with some other teammates who plan to run the Epic Relay with Keith and Steve next weekend – Brian and Kevin.  Both strong trail runners.  Kevin has to be because his wife Beth publishes Boulder County’s most popular running blog, Shutupandrun.

Launching from Chautauqua Park at 5700 feet, the trail rises unrelentingly to 6292 feet in the first mile and a half.  To figure out the grade, convert everything to the same unit of measure.  Let’s go with feet.  The rise was 592 feet.  Done with the rise.  There are 5280 feet in a mile so the run was 7920 feet.  592/7920 gives a grade of 7.5%.  That’s a decent incline, but one that most runners are capable of running – assuming they are acclimated to running at an elevation one mile above sea level.

I’ll spare you the math from here on out.  The next eight tenths of a mile is down a 5% grade and then back up a 10% grade over the next three quarters of a mile.  This is the high point of the run – assuming you turn around after 5 miles like I did.  The trail has a couple more 150 foot drops followed by intense 10% inclines (reversed on the return); otherwise it smooths out for some nice running.  There are a number of trail intersections.  The signs either say Mesa Trail with double arrows or have a single arrow pointing to South Mesa Trailhead, which is about 7 miles from Chautauqua.  This is my first run on Mesa Trail since the mud, snow and ice of the spring.  Great trail conditions now.  Get out there. 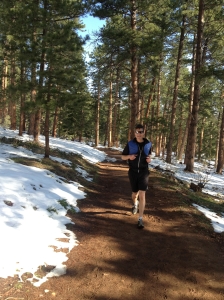 Keith and I ran the Mesa Trail again this Saturday, but in the reverse direction.  We started and ended at Chautauqua Park in Boulder.  This enabled us to breakfast at the Chautauqua Dining Hall.  This place doesn’t get much press, one of Boulder’s hidden gems.  We didn’t feel under-dressed in our sweaty running gear and muddy shoes.  Although I’m not sure it’s possible to under-dress anywhere in Boulder, except maybe the Flagstaff House restaurant.  We were here because of Susan’s (Keith’s wife) birthday.  She was running with Jabe’s Running Group – an incredibly social network of runners in my neighborhood.  They launched from the South Mesa Trailhead and joined us for breakfast at Chautauqua.  With seven runners and several other hikers and friends, we pwned the place. 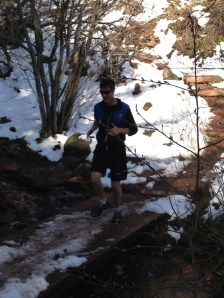 This running-centered, real-world social event leads me to think of the virtual social discussion from the Trail Runner Magazine’s current blogging topic:  Social Media – Bane or Boon to Trail Running.  It seems unlikely any blogger would respond “bane”, and I’m no exception.  I’ll tell you how I leverage social media.  When I plan to run a trail, as part of an event or otherwise, I query hiking and running blogs for trail descriptions.  It’s the rare trail race web site that describes an event to the detail I desire.  I’m happy if they provide an elevation chart, but those can be misleading.  Many event web sites are so poor in content I wonder why they bother.  I’m waiting for the year the Boulder Marathon figures out how to add links to their sponsor logos.  Even the good ones though, like the IPR from Ouray to Telluride, are no substitute for a verbose, segment-by-segment writeup by a good blogger.  I want more than a description, I want to read the experience. 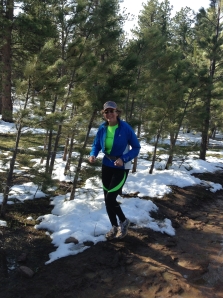 The information I look for in a running blog includes advice on how to prep for the event.  How to optimally run the course.  Especially tips on the best eateries in the vicinity.  It’s difficult to say exactly what detail will turn out good-to-know.  Copious comments might contain content that I would not have thought to consider.  This is where the social aspect comes into play.  Social media is a boon to communication.  And communication expands the potential of whatever it’s focused on.

I can imagine worse case scenarios wherein word-of-mouth leads to more popularity than a trail or event can support.  You see this with some big road races; they start out small and become huge as a consequence of their successful operations.  Trails generally control this by setting limits on participation.  I don’t know how trail events establish these limits – probably experience.  I think the Imogene Pass Run has a weather related cutoff time to get runners over the pass.  Regardless, I don’t think trail running suffers any adverse affects from social media.  It’s all good. 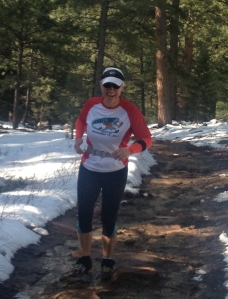 My runner’s story is a prime example of running related social media.  It extends my enjoyment of trail running with another enjoyable hobby of writing.  Perhaps posting these pics of my friends on the trail today enhances our collective experience.  That’s Keith in the first two pics, he’s navigating a treacherous snow-covered bridge in the second.  The trail was more mud today than dirt from Wednesday’s half foot of snow.  We could only average a 12 minute pace for ten miles.  Eve, in the third photo, dared to wear brightly-colored gear despite the mud.  She later said the conditions made her feel like a kid.  Jabe is clearly enjoying herself as she wades upstream on the trail in the fourth photo.  And the final pic captures our birthday runner Susan leading Jen in both conversation and running on the snow covered trail. 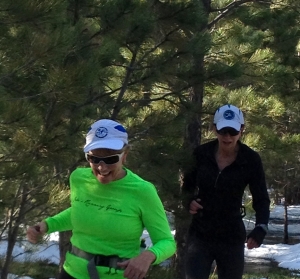 I missed snapping a shot of Suzy, and unfortunately she didn’t have time to join us for breakfast.  It was a two hour run.  I will say the real world social aspect of running beats this virtual social media stuff hands down.  The girls told hilarious stories and the food at that place was awesome.  So were my two Bloody Marys.  The virtual world is no substitute for drinking after a satisfying ten mile trail run through snow, ice and mud.  Sharing pictures is a nice benefit of social media.  It helps to remember the experience.  Not as good as being there though.