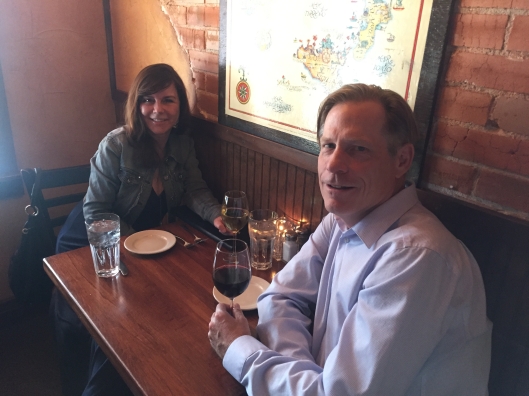 A marathon is a long run.  Don’t bother fact checking that, unless you intend to run one.  In my experience, it’s also true that the miles in the second half of the event are longer than the first thirteen miles, if measured by time rather than distance.  That was true today as the 70° heat eventually caught up to me.  Still, I had a good run.  This photo of me and Karen was taken in the Cubby Room at Bisetti’s Ristorante.  We went for Italian and for some reason got sat in their most romantic setting.  It’s a private room with a fireplace.  Yes, I drink wine the night before a marathon.  You never know when it’s going to be your last. 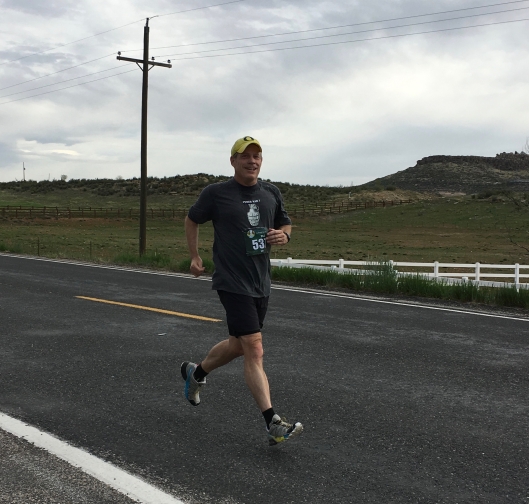 Marathons can also make for a long day.  I boarded a bus from the Hilton Fort Collins at 4:30am this morning to ride up Poudre Canyon for the 6:30am start of the 2017 Colorado Marathon.  My Weather Channel app said the race would begin at about 54°.  That was from the night before, I didn’t have a signal in the canyon.  Other people were showing 60°.  Not ideal for running a marathon.  Surprisingly, I’m still smiling in this photo at 20 miles.

My buddy Chris drove out to Fort Collins to take these photos.  Can’t thank him enough.  This one is the same spot, at 20 miles.  You can see the cloud cover helped to mitigate the heat.  I ran the first half at a 7:30 pace.  Pretty fast considering I train between 8 and 9 minutes per mile, depending on the distance.  I knew this was from a combination of the nearly 1% negative grade and running with others.  This had me well ahead of my target time of a 3:50 finish.

My pace dropped to 8 minute miles for the 3rd 10K, miles 14 to 20, still really decent.  This accomplished one of my biggest goals, which was to run the third quarter of this marathon strong.  The heat got to me right after this photo though.  You can see the fatigue setting in.  I ended up vomiting three times in mile 22, which began my slow down.  You could say I vomited a 9:30 pace for mile 22. 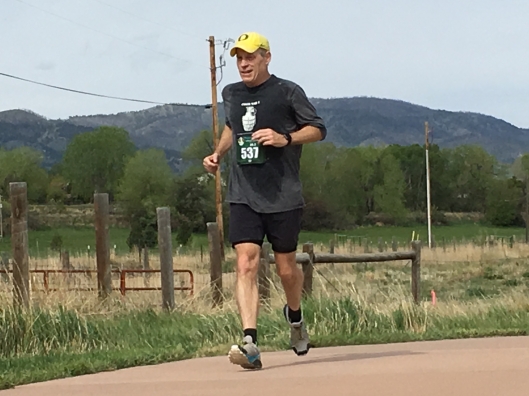 Before I succumbed to the heat, I was on pace to easily qualify for Boston, and was feeling excited.  Running ten pounds over my weight from the last few years, I wasn’t expecting to run this fast.  But I slowed down to a 10:30 pace for miles 23 and 24, then an 11:30 pace for the final two miles.  After getting sick, I began to stop at the aid stations for a half minute to not only drink additional fluids, but to pour several cups of water over my head.  Seemed like the smart thing to do.  Not sure I would have finished if I didn’t stop for water.  I train with my heart rate under 150 beats per minute; the combination of this heat and my early pace gave me an average heart rate of 177 bpm.  Not used to that.

I did finish, fairly exhausted and with a bit of cramping afterward.  It was good to have Chris and Karen there to help me recover.  Not sure if I’ll be able to train for marathons in the near future, now that I commute to Denver for my new job, but I’d like to run this puppy again.  Great course.  Just need to get lucky with the weather.  I thought my bib number, 537, all primes, would work some magic, but weather rules in marathons.  I’m happy with this one though.  Great run overall.  Finished at 3:42 and took second for my age.  As I was passing an Indian kid, about 20 years old, earlier in the race, he said to me in a strong, rhythmic accent, “Wow, do you mind sir, telling me your age?”  Told him I’m 55 and he said something else about being impressed.  Not sure what he saw.  My hat would have been covering my gray hair.  Apparently I look old below my hat.