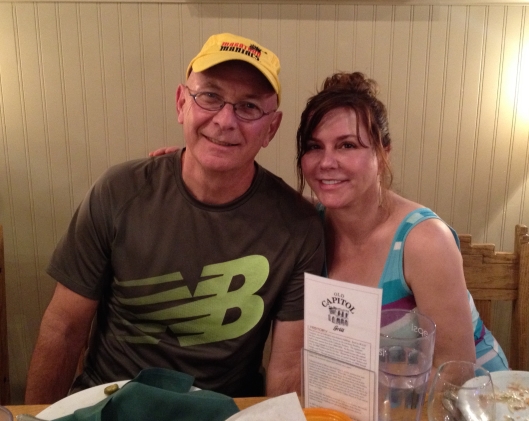 I don’t think I’ve ever trained as much for a marathon.  The one sensible item left unchecked on my list was to run the course.  I ran the half marathon loop on the Boulder Backroads Sunday morning.  The full marathon is simply twice around the same loop.  This is smart prep, although I’m a bit psyched out now at all the rolling hills and by how slow I ran.  But I knew it would be a slow course, I’ve run it before.

The course exits the Boulder Rez onto 55th St. and heads north.  The gravel isn’t exactly thick, but it’s heavier here than on the backroads further north.  And much of the road contains those ripples so common to gravel roads.  Less than ideal but I wouldn’t complain about it.  Preferable to the mile or so of asphalt on the next section – Niwot Road.  This road presents a slight rise west bound and of course a nice downward slope on the return.  Except that the east bound section is half the distance as it comes out from a different road.  Pavement won’t present much impact though given such a short stretch.  Pavement won’t impact runners at all who are used to training on it, I never do.  And of course, pavement is faster, so there’s that.

In fact, if I were considering racing hard, I’d probably accelerate on Niwot Road – in both directions – to capture the speed of the pavement.  My favorite racing tactic is to take whatever the course gives me.  I slow down up steep hills to maintain a steady heart rate and accelerate through the downhills.  The dirt roads north of Niwot Road are super nice for running.  Very little gravel.  After running the course, I expect my two returns to be my fastest times.  The course goes out uphill the first 10K, back downhill the second 10K, and then repeats.  Certainly my second 10K will be faster than my first.  Not only will my first 10K be uphill, but I’ll be warming up.  It’ll be somewhat amazing really for my fourth and final 10K to be faster than my third.  Twenty miles is when I typically begin to fold like a cheap card table.  But the second loop contains some hills early that the final 10K won’t have.  My Garmin stats will be interesting.

I’m considering going back out there this morning to run the loop again.  That, or putty and paint some house damage from the puppies.  Probably both.  This photo is of Karen and her cousin Matt; we met for dinner last night at the Old Capitol Grill in Golden.  Matt and his wife Debbie are visiting their son who is attending Seminary.  If you think I run some crazy events, Matt runs ultras.  His next event involves running around a one mile loop for 24 hours to see how far he can go.  I think I’d get dizzy but Matt says the loop contains enough turns that you don’t notice.  The really crazy thing is Matt only trains three days a week with 8 to 10 mile runs.  And he runs marathons all the time.  I understand that running only 30 or so miles per week is all one should run in terms of health, but what would I do with all my extra time?  Enjoy your Labor Day.