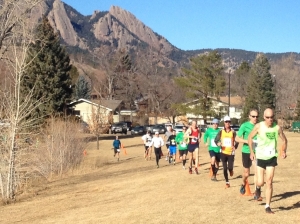 Some say we won the team event in last week’s Boulder Cross Country Race because there were no other men’s teams registered.  I say we won due to the strong display of pack mentality illustrated in this pic.  Click on it to enlarge the view.  Pack mentality probably has some very specific meaning in psychology, but I’m using it here to suggest running as a team helps everyone to run faster.  This was my experience on teams as a kid.  Makes me want to consider training more with a team.  Fred trains with the Revolution Running Club.

That race was last month.  This month I have a marathon coming up.  The Austin Marathon on February 16th.  I’ve considered dropping out thinking I might not be ready.  It’s hard to get in the miles during the winter.  And I’ve been snowshoeing with Karen on the weekends when I should be maximizing my training miles.  And then, I have a really sore knee.  But I’ve been stretching and feel like my knee is responding well to that.  And that snowshoeing is still a good two hour workout.  Has to be good for something.  I just want to run that marathon.  I don’t need to run it fast.  I just want to enjoy it.

My goal will be to run a 9 minute per mile pace.  I have a tendency to start out well under 8 minutes per mile but I intend to run with discipline this time.  My natural pace is about 8.5 minutes per mile, up to about 18 miles.  I suspect I could hold that in Austin considering the lower elevation, but I would still struggle on the final 10K.  I don’t want to do that.  I want to enjoy this run.  My goal will be a 4 hour marathon at a 9 minute pace.  I ran 18 miles today.  My first long run in several weeks.  Only averaged 10.5 minutes per mile, but I was running through a foot of fresh powder in 18°.  I don’t expect snow conditions in Austin.