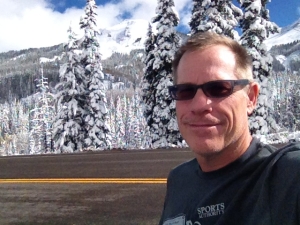 I should be stitching up my Halloween costume.  Instead, I’m watching the ten o’clock news, because tomorrow I drive to Durango.  Almost embarrassingly, I have to consider the possibility of a fourth primary route.  I’ll have to drive down I-35 for a 100 miles or so to Walsenburg.  Then drive another 300 west on Hwy 160 over Wolf Creek Pass.  The opposite corner of going west 300 to GJ and south 100.  The Pagosa Springs approach would be nice.  It would not include Red Mountain Pass, Molas Pass, and Coal Bank Pass.  This picture is on the road between Ouray and Silverton.  It’s referred to as the Switzerland of America.  There are 76 miles between Ouray and Durango.  Each mile is just like this.

I go to bed Thursday night a little bummed.  The snow storm that was supposed to steer north into Wyoming is dumping over Colorado.  Mostly wind, but my local news is hyping up the snow.  The weather channel isn’t nearly as dramatic, surprisingly.  I come to the conclusion their focus is still on leaking oil wells related to the Great September Flood.  I wake up having decided I will drive Hwy 285 through BV, Monarch Pass, the Black Canyon, and lastly the Switzerland of America.  I fail to view any media suggesting this route, that hovers around 7000 feet, will be closed today.  It doesn’t help that the Weather Channel and my local news have such varied spins on this event.

An accident is blocking my interchange at I-70 and E-470.  I know this as I approach the interstate off Hwy 52, because my radio tells me so.  It’s cleared by the time I pass through but can’t possibly account for some of the weird slow downs along the way.  I sit on Kenosha Pass for 10 minutes due to construction.  Snow flurries start on Monarch Pass.  The snow falls off and on all the way to Durango but the roads are clear and it’s a gorgeous drive.  The Black Canyon looks on fire with flaming Aspen and low hanging clouds for smoke.

I can’t see the Switzerland of America as I turn south on Hwy 550 because of the low cloud cover.  As I pass through Ridgway the sun suddenly illuminates the mountains that box in Ouray.  Always stunning.  I stop by Kristopher’s Culinaire in Ouray to say hi.  90 minutes later, I meet Rob at Ska Brewery in Durango.  I camp out at Rob and Sue’s house for the weekend.  They live up Lightner Creek on a mountainside.  I would describe it as romantic but everyone lives like this in Durango.  On the sides of mountains. 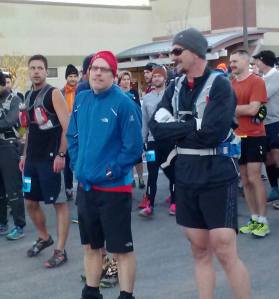 Saturday morning, we toe up to the starting line,   This run is that small.  We begin on the street but hit the trail after a mile and immediately begin climbing.  I warm up on this first hill.  I remove both my hat and gloves before one and a half miles.  I keep my jacket on because the wind is cool on top the ridges.  I tie it around my waist after 3 miles and leave it there.  I replace my fleece hat with my orange marathon hat to keep the sun off my face and the light out of my eyes.

There are 53 runners.  With a twisty trail in the trees, I lose sight of all of them and feel like I’m running alone.  I run back into a crowd of them around 5 or 6 miles where the course splits.  It should lead right, and the left branch is where the loop rejoins this leg on the return.  The volunteer doesn’t know the route and one runner goes the wrong way, oblivious to our shouts while listening to her ear buds.  A guy from her group chases after her to bring her back.  I get lost myself a short while after this and waste a good 5 minutes searching for the trail.  I don’t find it until the next runner behind me catches up and spots the way.

This is an extremely technical trail.  The path is challenging and staying on course takes constant vigilance.  Intersections with other trails are well marked but it still takes quite a few educated guesses.  Keeping a straight line is what I know to do from experience and it almost always leads back to the trail.  I suspect I am running oftentimes off-trail, but false paths generally lead back to the main trail.  At times, I have to slow down, not because of fatigue, but in order to sight the trail markers – little blue and white ribbons strung up on tree branches.

Rob catches up to me shortly before we are half way into the run.  He’s highly skilled at following the trail.  This relieves me of the pressure to sight the trail and probably helps me to run faster.  Trails are slow though compared to running through neighborhood streets.  There is snow in places and significant mud.  I never fully fall but stumble a couple of times – stubbing my toe hard on rocks.  I can see by traces on the ground where runners before me have fallen.  This is a hint to tread carefully.

The mud dries up somewhat later in the run and makes for some nice cushion for sore knees.  Another challenge of the trail is when it runs along the ridge of a hill.  Footing is tricky over the rocks and I wonder whether I’ll fall left or right over the ledge should I trip.  This is what hikers refer to as a bit of exposure.

Even if this run were only a 10K rather than a 32 mile ultra, it would be hard.  This is a real trail.  Snow, mud, hills, twists and turns, exposure.  After 40 kilometers, the trail has stopped surprising me.  Did I mention the tarantula?  I took pictures but they didn’t turn out well.  The only obstacle now to finishing the final 10K is me.  My feet are tender.  My hamstrings feel close to cramping.  There are knots of pain in my thighs.  I must be refueling well though because I’m not bonking.  It’s hard to tell sometimes when I’m climbing a hill and have to walk.  I tell myself I’m fine, it’s just the hill. 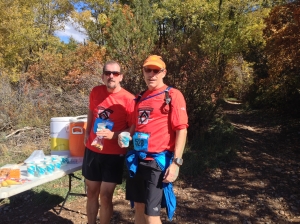 For fuel, I eat four or five Chia seed bars.  Each fruit bar contains 155 calories with sugar, protein and a healthy dose of potassium.  These will be in my pocket for next weekend’s Denver Marathon.  They leave me feeling like the spirit of the Tarahumara Indians are guiding my feet over the trail.  I stumble right at 26.2 miles – a marathon – but don’t fall.  Maybe I had the protective benefit of trail spirits, maybe I didn’t, but I finish this race still running strong and uninjured.

This is the most amazing trail I’ve ever completed.  The 25 mile Collegiate Peaks Trail Run was special.  And the IPR is unmatched with its 10 mile climb above Ouray and 7 mile drop into Telluride.  But this trail ultra is a runner’s dream.  Durango is truly a trail runner’s paradise.  Boulder County has some good trails but it doesn’t come close to Durango.  The entire town is surrounded by mountain trails.  I find myself somewhat smitten with this town.  I could live here.  Rob and I finish 4th and 5th respectively in our 50-59 year old age division.  It takes us 8 hours and 25 minutes.  I plan to visit Rob a few times before next October to become more familiar with this trail.  I’ll be back for next year’s Ultra.