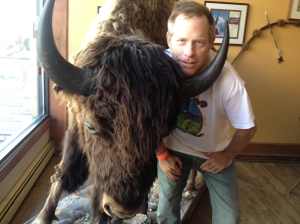 Can anyone tell me why the westbound lanes of I-70 come to a crawl as you approach Idaho Springs, when it’s the tunnel on the eastbound lanes that’s under construction?  Seriously.  Still, we get into town fairly early Friday afternoon.  I’m able to pick up my race packet at the Buffalo Bar.  We decide to drive up to Empire for dinner at the Peck House Hotel.  Highly recommended, perhaps as part of a trip to Winter Park.  This is a destination restaurant.  I categorize the food as French.  We go to bed early as Karen needs to drive me to the bus pick-up at 6am. 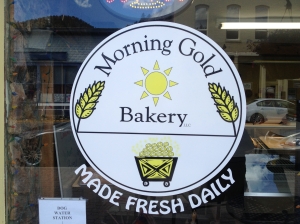 Karen and I stop by the Morning Gold Bakery on Miner St. for donuts and coffee Saturday morning.  I pick up a chocolate long john for my bus ride.  In case long john is a regional thing, it’s a cream-filled, burrito-shaped donut.  Pure sugar, but did I mention I am on my way to run 13.1 miles?

I sit next to a guy on the bus who has run this event before and he supplies me with race intel.  He says the first half of the course is rolling hills and the elevation drop doesn’t really occur until the second half.  My Garmin illustrates the elevation profile a bit differently, but I won’t know that until after the run.  He further says the crowd takes awhile to thin out which is another reason to start out slow – since unless you start near the line you will be forced to run slow.  I take his word as gospel and determine to start out easy and hope for a negative split.

I don’t have any goals for this run.  Karen asked me the night before and I said I expect to run a 1:40, give or take a few minutes.  Karen bet $3 on me running a 1:37 and Ellie put $3 on me running a 1:43.  I didn’t tell them that the odds were just as good I might run a 1:50.  It’s been a couple of months now that I’ve entered an event and I’ve lost some of my racing edge.  Minutes before some lady sings our National Anthem, Allison spies me in line and I join her and her dad, Steve.  They lost Keith when he detoured earlier to the porta-potties.

The start is indeed crowded.  It’s nippy too with the temperature below 50°.  Fortunately there’s no wind.  At 8:23, my first mile is quite a bit slower than I would like for an average pace.  It’s not unexpected though and I don’t try to fight the crowd.  My patience is rewarded in the second mile as the runners begin to thin and I record a 7:21.  I speed up from here with mile 3 in 7:13 and mile 4 in 7:14.  I can feel the 8500 feet of altitude but I also feel like this is a manageable pace.  The first 2.5 miles are actually mostly flat.  There are hills but I wouldn’t notice them without the elevation.  I welcome the beginning of the downhill course just as the initial stampede of the starting crowd dissipates after two miles.  The remaining course is downhill with room to run.

A guy calls out the time at the halfway point.  He says 47:47 for 6.2 miles and my watch has me about a minute under that based on when I crossed the starting line.  A noticeable hill presents itself to start the second half of this run – something the guy on the bus neglected to mention.  It’s a clock-stopper and I lose my even pace.  Thankfully it goes down on the other side and I regain my stride.  My times slow down a bit but all remain around 7:30.  I catch and pass the 1:40 pace sign in the 7th mile but it passes me back in mile 8 as my stomach cramps and I lose a good 30 seconds off my pace until it settles.  I suspect it cramped from some electrolyte pills I’m experimenting with.  Perhaps I should test them more in workouts rather than races, but my real objective for them is a full marathon. 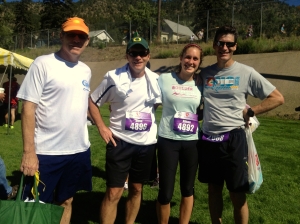 I regain on the pace sign and maintain a comfortable pace to the finish for a 1:38:39.  This is closer to my 1:40 estimate than to Karen’s 1:37 so Ellie and her both owe me $3.  Great event overall and even better weather.  I expected rain but instead it was sunny and in the 50s for most of the run.  I could hear the interstate the entire way but rarely saw it.  Gorgeous course along Clear Creek.  It even included a little dirt road and trail around mile 8.  Allison ran her expected time – around 1:50.  Keith might have run a PR.  Not sure but I can ask him tonight at a little get-together.  The four of us in this photo will also get back together for the Flaming Foliage Relay in September.  I think we’re ready.