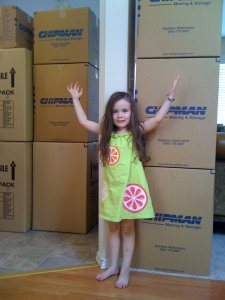 No, not us.  But my sister-in-law’s family is moving from Spokane to Carlsbad for Chad’s job.    They stopped over with us for the night on their way.  We were able to put Chad and Yaya up in the carriage house since we don’t have tenants right now.  The kids bunked with Ellie.  I’m going to miss having them live in Spokane.  I really enjoyed visiting for Thanksgiving.  I run the most awesome route around Liberty Lake outside their door.  But it’s not about me.  Chad got a nice opportunity to run a hospital in New Mexico.  So they packed the kids up in the car for a massive drive south to the Chihuahuan Desert.  It was nice to see them.

Actually, now that they’ll be living half way between us and Austin, we expect to start driving through on our annual trips to Texas.  It’ll be a different route than our typical overnight through Amarillo, and a nice change of scenery at that.  I haven’t been to Carlsbad, but I’m familiar with the state and I like New Mexican food.  It’s way hotter than Tex-Mex, but quite a bit more favorable too.  They seem to have advanced the Tex-Mex gastronomy beyond cheese, while keeping all the best parts of a frozen rita.

I moved a great deal as a child.  I was born in Davenport, Iowa and lived my first 6 years there.  But my father died young when I was five from a brain tumor and my mom had seven kids to care for.  So I found myself moving every year or two up until high school.  That was the big move to Texas.  I still remember my friends from 8th grade asking me if I’d be riding a horse to school, and I didn’t know.  Even more memorable is the first girl I met in Round Rock asked me if I wanted some of her dip as she took a pinch.  Nice.  Yaya’s kids seemed in good spirits last night – totally up for the expedition.  I hope they have some great experiences in New Mexico.